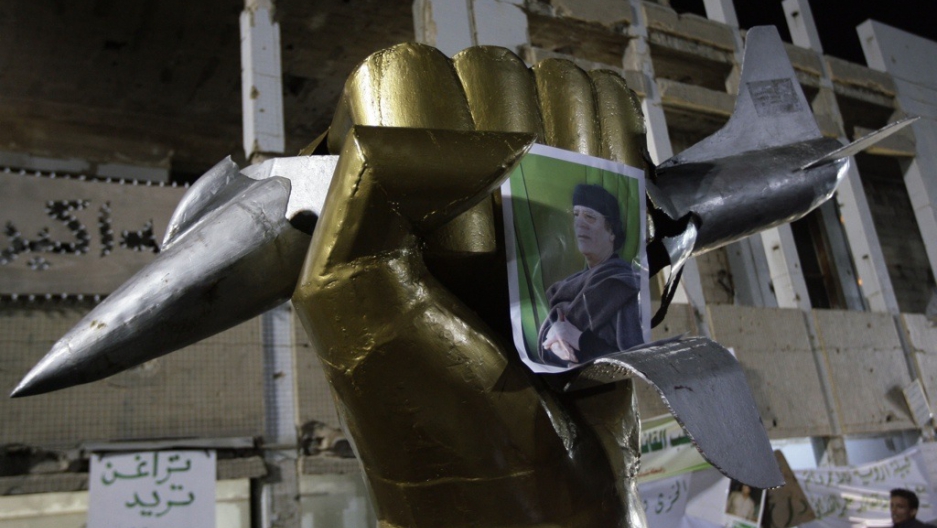 BOSTON — It was Karl Marx who famously said that history repeats itself, “first as tragedy, second as farce.” And while Libya represents the Arab Spring’s first real tragedy, there is something decidedly farcical about the West’s response.

First of all NATO, the organization with the operational responsibility of carrying out United Nations Security Council Resolution 1973, is looking more and more like the gang that can’t shoot straight.

As in Afghanistan, some countries are baying like hounds at the kill to attack, while others don’t really want to get their feet wet. Britain and France are up in the skies enforcing the no-fly zone, with assists from Norway, Denmark and Canada, calling for more. Others hang back from military involvement. And two of NATO's biggest and most important members, Germany and Turkey, don’t want to be involved at all.

Then there is the United States, which has been NATO’s leader and most important guiding force since the organization’s inception. But this time around, the U.S. position is: We’ll be glad to get you started, but then we really want to stay backstage.

We are led to believe that the United States will hand the actual bombing missions off to others, only to be told, no, the United States is still keeping its hand in with the bombing. This ambiguity will not be understood by many Americans who have trouble grasping the subtleties of America’s Libyan game, especially the right wing that is used to equating American leadership with belligerence and bellicosity.

Also, there is no real agreement on the mission. Security Council Resolution 1973 calls for protecting civilians, not regime change. Yet what does it mean to protect civilians when the rebel forces are mostly civilians with guns?

It is a tricky doctrine to say that governments cannot act to put down rebellions. It is not one that the United States embraced 150 years ago at Fort Sumter in Charleston, S.C. Nor is it one the United States has advocated in Bahrain where we have a navy base.

Writing in the op-ed pages of the International Herald Tribune on April 14, presidents Barack Obama and Nicolas Sarkozy of France, along with British Prime Minister David Cameron, underline the confusion by saying: “our duty and our mandate … is to protect civilians, and we are doing that. It is not to remove Gaddafi by force.” But then in the very next sentence they say: ”but it is impossible to imagine a future of Libya with Gaddafi in power.” And then they say:” “Gaddafi must go and go for good.” That sounds an awful lot like regime change to most people.

It’s a little like saying, we are not putting the poison on the lawn to kill grubs. We are doing it just to protect the grass.

One has to wonder what would have happened if the Soviet tanks had poured through the Fulda Gap into Western Europe. Would some NATO countries have said, we will restrict our activities to guarding the Swiss frontier, or, we are standing with you shoulder to shoulder, as long as you don’t put our troops in harm's way?

Fred Kaplan, who writes intelligently about national security, asks: “What is NATO for, anyway? Libya marks only the third time in NATO’s 62-year history that the alliance members have joined forces in battle. The first two were in Kosovo and Afghanistan. None of the three wars has had anything to do with the reasons for the alliance's creation. Nor has any of the three wars been waged as a unified alliance. In this sense, the strategic incoherence of the Libyan operation, and the frustrations it’s unleashed, are nothing new.”

It is clear that Obama really does not want another war in another Muslim country, but he seems to have been persuaded to act in Libya by the advocates of humanitarian intervention in his government over the advice of his secretary of defense. But he’s half in and half out.

It was leaked that CIA was on the ground in Libya assessing the situation as to how we could help the rebels. Assurances were made that no, we will not commit soldiers to the fight. But that’s the way it started in Afghanistan, first CIA helping the rebels, but then ground troops follow. And you can hear the siren song of sending troops to finish the job in Libya rising.

We are already seeing the Saudis and the Gulf States cozying up to the Chinese, whispering that the U.S. is no longer a reliable protector. China is not yet ready to replace the U.S. in that role, but look for a future Chinese base in the Persian Gulf one day, just as they are spreading across the Indian Ocean.

And what is the lesson that North Korea and Iran take away from all this? Give up your nuclear capacity willingly, as Gaddafi did, and once you have disarmed they come to get you.