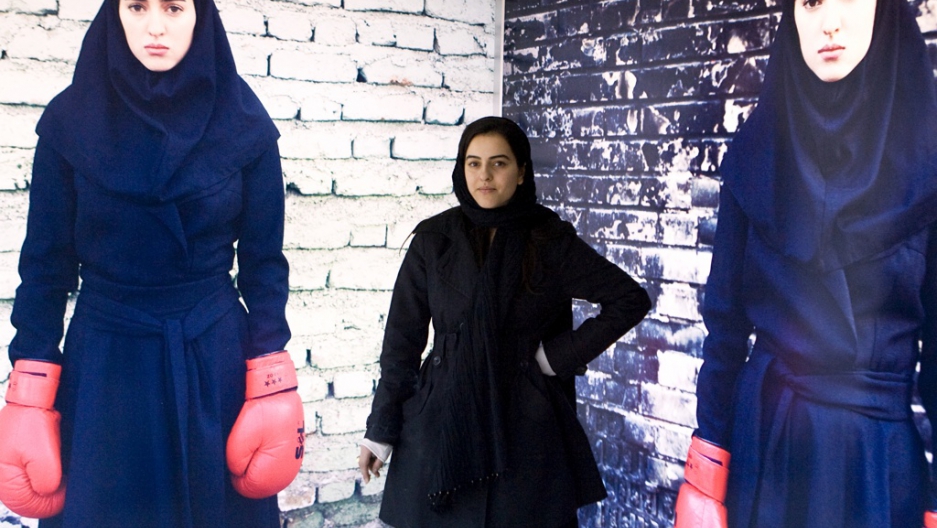 Newsha Tavakolian stands next to her photographs a day before her first the opening of her solo exhibition at Aran gallery on Dec. 23, 2010 in Tehran, Iran.
Credit: Maryam Rahmanian
Share

TEHRAN, Iran — As a little girl, Newsha Tavakolian dreamed of being a singer. There was only one problem: this wasn’t a career open to females in the Islamic Republic of Iran.

So now, some 20 years later, Travakolian, has found a different way to express herself. She’s become one of Iran’s most accomplished photographers, covering news and documentary projects. Her career started at the tender age of 16, shooting for various women’s publication in Tehran.

She has covered wars in Iraq, Afghanistan and Lebanon, shot the Hajj in Mecca, and her images have appeared in many influential publications in the United States, including TIME, Newsweek and National Geographic. Her images often depict the lives of women in Islamic societies.

In recent years, however, Tavakolian, 29, grew tired of shooting subjects, which she increasingly considered boring.

“They always wanted to show the clash between modernity and tradition, and all of these cliches,” she said. “And I was a part of that. I was taking pictures of the same things, and it wasn’t interesting for Iranians, because this is what they see all the time.”

As she’s matured in her craft, she has begun looking closer to home with a more localized eye.

“I realized that if I wanted to be respected in my own country I should do something with more layers,” she said. “I used to feel like I had to cover far away subjects, but I’ve changed. For this exhibition I chose a subject that’s only millimeters away from me.”

Tavakolian is part of the contemporary Iranian photography community, which is the artistic outlet in which many believe Iranians excel most. The current generation learned from a crop of Iranian photographers who covered the 1979 revolution, the eight-year war with Iraq, as well as the more mundane aspects of life in Iran — a nation that, although ruled with a heavy hand, is undoubtedly one of the most richly photogenic on the planet.

The restrictions of photography have become infamous, and many of the journalists jailed after the 2009 presidential election were arrested for taking pictures. Besides those news photographers who ended up behind bars, many others have since fled the country.

Those who have stayed have decided to turn their lens away from such politically charged subjects — the kind that land their images on the cover of Western newsweeklies — and instead pointedly document the critiques of Iran’s social fabric, which is ultimately much more powerful than yet another image of Iranian President Mahmoud Ahmadinejad giving a speech.

For her first exhibition, Tavakolian did a series of portraits of Iranian female singers like the kind Tavakolian once dreamed of becoming, who are still not allowed to perform in public.

The six portraits display a range of emotion from passion and ecstasy to rage and longing, and each was shot in front of a glittery backdrop that evokes a sad showbiz feel that is about as off-Broadway as one can imagine.

Opposite the portraits is another series, all of the same young woman in a variety of public settings, with sullen looks, not of despair, but often resignation. Each one is intended to represent the cover of an imagined album by one of the featured singers.

In one photograph, her model stands knee deep in the Caspian Sea fully clothed, completely in observance of Islamic tradition. The album title is, “Do You Remember This Is Not You?”

In another, the model’s head is encased in a transparent box, with the title “Glass Ceiling.”

The youngest singer in the series, Maral Afsharian, is represented by an image of the woman standing alone in the middle of an empty Tehran street wearing large red boxing gloves. Its title is, “When I was 20.”

In a separate room within the gallery, silent videos of each of the women played on a loop in the dark, providing a stark reminder that, although they might not be heard in public, they exist, which was ultimately one of Takavolian’s main objectives in the exhibition.

“I really don’t care about the results,” Tavakolian said in an interview several days before the opening. “The important thing is that it’s been 32 years that women cannot sing solo in Iran. And there are so many hopes and dreams lost in this period of time.”

“How can you say women can’t sing? It’s like saying a doctor can’t operate. It’s necessary in a society, so we’re missing something. And people have forgotten about that. It’s become normal for them,” she added.

The varied local responses to the exhibition provide a unique window into contemporary Iranian life. Some viewers did not understand the point of the soundless videos or the images captured in the album covers. Others were impressed.

“I really like Newsha’s work a lot,” said a local photographer who asked not to be named. “She’s very good at capturing subtle things that the rest of us miss.”

Another photographer, whose work relies heavily on the intimate details of his local surroundings, is Mohammad Ghazali, who uses very urban, often mundane, situations to tell different stories about Tehran. In one exhibition all of the shots were comprised of images from within Iran’s metro stations, another included images of the famed murals of those martyred in the war with Iraq.

His most recent project is comprised of photos from the points of view of statues of historical figures throughout Tehran. He said he chose the subject to help him tell how the capital has changed, and how the legacies of these important figures have evolved.

For example, the statue of a very famous poet was facing a garbage can. Of the statues he said, “They’re all over town and they tell a bright story, each is from a specific period of history”

“The viewer can form an opinion from the POV of the statue, as they view the conflict between present and past,” he added.

In a sense his work is predictive of an evolving society, but it also serves as a documentation of life in Iran’s frenetic capital. Locals might find it hard to understand what it is he is trying to capture, but that does not seem to have much impact on his desire to go after these seemingly obscure images.

In yet another series, he shot the windows of various Tehran shops after they were closed for the day, which got the attention of the police, who warned that if any of the shops he photographed were robbed in the coming days, he would likely be the prime suspect.

While others have used such intimidation to build a case for asylum, Ghazali sees it as a fact of life.

“These things have become normal for us. We know the challenges we face. I know sometimes when I go out and shoot I will get detained. So I'll bring a few photos of other examples from the same project I'm working on,” he said.

The constant struggle between photographers trying to capture images of life in Tehran and the city’s authorities who try to stop them has for many become indicative of the struggle for greater freedom of expression. Those who continue to work under these arguably stifling circumstances, though, find considerable inspiration from the challenge.

Ghazali and Tavakolian said they remained undeterred, and in their perseverance and that of other photographers working in Iran, one can hope for an ever clearer picture of the young and dynamic society living inside this oft unseen and equally misunderstood land.

“A lot of people get upset about the police stopping us, but it's part of the reality. I just think to myself ‘he's doing his job and I'm doing mine,’” Ghazali said.