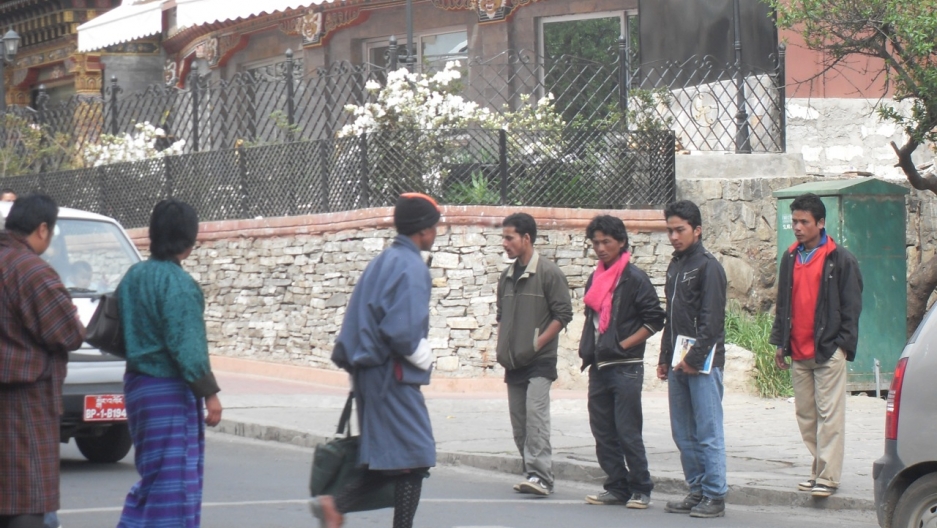 Share
By Mary Kay Magistad Anywhere else in the world, a pool hall or snooker parlor would likely be filled with smoke. Not here. This one is filled with Buddhist monks, and it's smoke-free; so, by law, are all public spaces in Bhutan. The monks here declined to comment on the fate of another monk, who's now serving a three-year sentence for smuggling in tobacco. But out on the street in the capital Thimpu, 18-year-old Pema Wangchuck lamented how hard it's become to find a cigarette. "Sometimes we feel very desperate," Wangchuck said, adding that he thinks it's a not a good idea to put a ban on cigarettes. Bhutan bans smoking in public places, and prohibits growing or importing tobacco. Starting in January, it made tobacco smuggling punishable by three years in prison. Already, two people are serving that sentence, including a Buddhist monk. Gado Tshering, Bhutan's ministry of health secretary, said the new policy will reduce smoking, save lives, and might save the government's ability to offer free health care to all Bhutanese citizens. "Unless we work together and prevent diseases, it will not be possible for us to sustain these free health care services because the cost of health care is rising drastically, the technology involved is so high, and the demand of people is going high," Tshering said. What's more, Tshering added, disease patterns in Bhutan are changing as the country modernizes and urbanizes. He said respiratory illnesses are already the leading cause of death in Bhutan, and smoking only makes them worse. Yugen Wangdi, a member of parliament, helped shepherd through the legislation that made tobacco smuggling a felony. He said the government banned tobacco sales six years ago, but smugglers were still doing a roaring business, and too many Bhutanese were still smoking, so parliament had to toughen the penalties. Wangdi said it wasn't enough to slap violators with a fine. "If somebody is caught, they should go behind bars," he said. Not all Bhutanese see this as reasonable. Many have protested that the penalty is way too harsh. Needrup Zangpo, editor of the English-language edition of The Bhutan Observer, said the tobacco ban has become one of the biggest debates here since Bhutan became a democracy in 2008. Draconian "People say it's draconian, and we understand why people say that," Zangpo said. "The Observer has been saying, we have to look at the law again, and try to minimize the penalties." Zangpo is not a smoker and never was, but back in his village, his parents used tobacco, and he said some villagers even grew it for private use. That's all gone now. Some local governments in rural areas say smoking has dropped dramatically since the initial ban on tobacco cultivation and sales started in 2004, and they want to keep the current law in place. But in the capital Thimpu, Zangpo said, where there's a will to smoke, there's still a way. "We have to admit that despite the law, and heavy penalties, there's still a thriving black market for tobacco," he said. "There's a strong network of people working in the black market." Guilty pleasure There's also the fact that individuals who travel abroad, including just across the border to India, are allowed to bring in up to 200 cigarettes for their own private use. They just have to pay 100 percent duty for Indian cigarettes and 200 percent duty for cigarettes from anywhere else. At those prices, smoking has become a guilty pleasure of the elite. I saw a couple of them light up in the leafy back yard of an official's home. Still, for all the controversy the three-year prison sentence for cigarette smuggling has generated, Bhutan Observer editor Zangpo said he personally likes the ban on public smoking, and on sales of tobacco: "Because my children won't have easy access to tobacco products, they're free of tobacco," Zangpo said. "We're thinking long-term." Still, the question lingers of whether such a long term in prison for those who smuggle cigarettes is really necessary for the health of the nation.