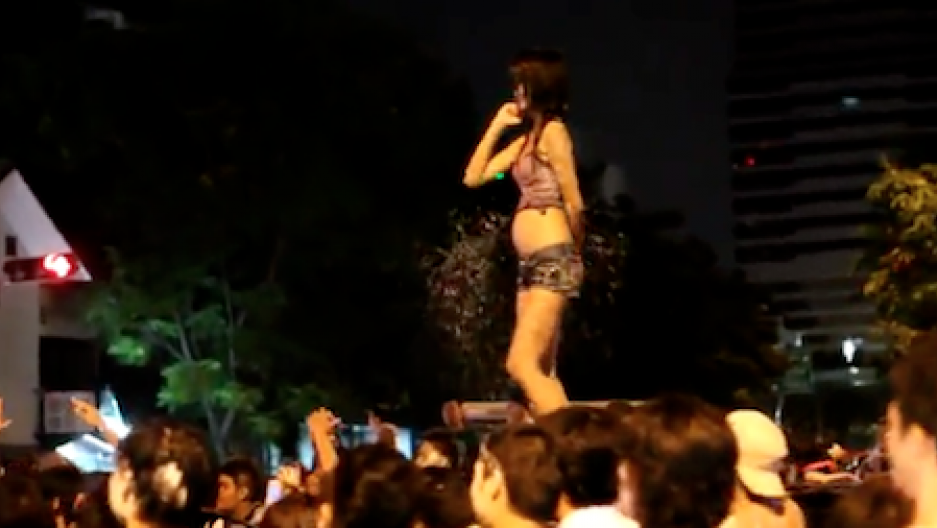 This is a frame from a camera phone video filmed during a boisterous Songkran lunar new year celebration in Bangkok. The video, which also includes topless girls dancing on vehicles, may bring on fines and even jail time. Thailand's culture ministry has warned that nudity and drunkenness during Songkran has led to moral decay.
Share

UPDATE: Thai news network MCOT now reports that three girls in the clip who were charged with indecent exposure are surprisingly young: 13, 14 and 16. That is a curveball and it dramatically changes the tenor of the story. I suspect the "Songkran has hit a new low" argument just won a lot more converts. And I imagine a sense of icky regret will be felt by many who forwarded the video and even TV producers who aired a blurred-out version of the clip.

They were caught topless by the all-seeing eye of the camera phone.

That tends to happen when you strip down, hop on a vehicle's roof and writhe before a packed crowd of guys. The girls were feeling festive during Songkran, a lunar new year's celebration-turned-nationwide water gun battle.

Naturally, someone recorded the moment with a camera phone and uploaded it to the Web. It became an instant hit.

As you can see from the direction in which the guys' heads are pointing, the topless activity is taking place to the left in the screen grab shown here.

If the girls were American, they'd be in negotiations for a reality show. But since they're Thai, they are being tracked down by the culture ministry and the police, who plan to fine them and force them them to contemplate the holiday's true meaning, possibly by reading books about Songkran to kindergarten students. (The public nudity fine, I should note, is only about $16.50.)

As for whoever who uploaded the clip? They face up to five years in prison under a harsh computer crimes act and up to $3,320 in fines. The cultural watchdogs may even go after the people who set up the loudspeakers.

Complaints that Thailand's signature holiday has been overrun by louts are nothing new. I am hardly surprised that a university poll on the issue -- yes, this scandal warranted a poll -- showed that 87 percent of Bangkok residents "said they were worried of the future of their children in this society."

I argued on the Rice Bowl just days ago that Songkran, in all its unbridled madness, is part of what makes Thailand special. To be fair, I also get that the establishment doesn't want Songkran to slide into all-out Mardi Gras-style sleaze. Neither do I.

But a potential five year prison stay for filming naked girls in public is far more outrageous than the toplessness itself.

As savvy Twitter pundits pointed out, the culture ministry's own Web site depicted bare-breased maidens of yore on its homepage while it condemned the topless partygoers.

I will leave the final word to Thai composer and author Somtow Sucharitkul, who offered his thoughts via Twitter.