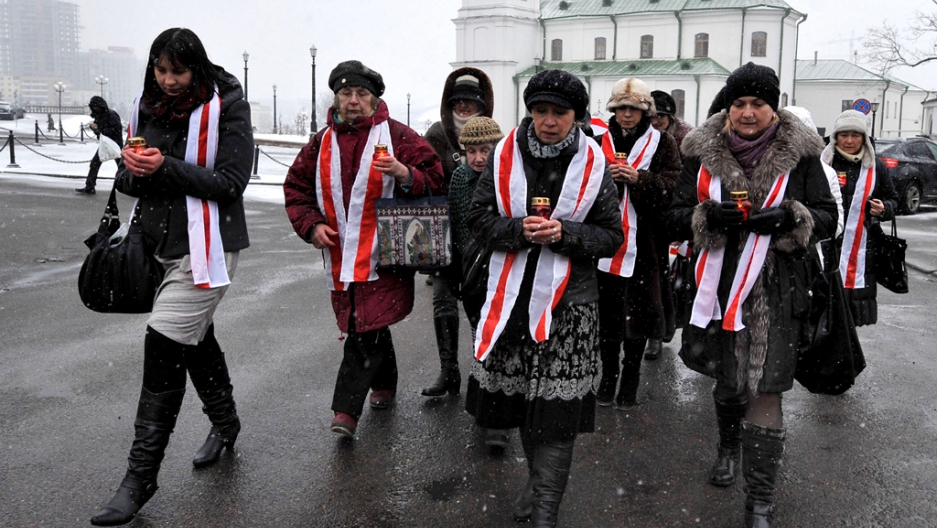 Editor’s note: Jean MacKenzie lived in Belarus from January 2000 – January 2003. She wrote this essay from her current home, Kabul, Afghanistan.

When Belarus makes international headlines, it is seldom for good reasons. The latest news is no exception: At least 12 people were killed and more than 150 injured when a bomb exploded in a busy metro station at rush hour in Minsk on April 11.

Those who have never been to Belarus may not be able to comprehend just how disorienting this event must have been in a country that has gone to almost unheard-of lengths to avoid conflict since it became an independent nation 20 years ago.

The tiny country with a population under 10 million, squeezed between Poland and Russia, has changed little since the Soviet Union collapsed in 1991. Of the 15 former Soviet republics, Belarus is the one that most resembles the parent nation; visitors have dubbed it a Soviet theme park.

Belarus is stuck somewhere in the 1960s; the thought of a serious terror attack has about as much relevance as a Martian invasion.

So the firm statement by Vladimir Lutsenko, a Russian colonel in the FSB (Federal’ny Sluzhba Bezopasnosti or Federal Security Service, Russia’s successor to the KGB), that he was “100 percent certain” that the bomb was the work of international Islamic terrorism must have struck the local population as somewhat novel.

But so far no one has come up with a more sensible explanation.

Belarus has a largely homogenous population: 80 percent are ethnically Belarusian, and non-Slavs are virtually non-existent. The widely reported remarks by the police that a man with a “non-Slavic appearance” was suspected of placing the bomb is curious ― if there was such a person, he would have been highly conspicuous.

Belarus has no issues with Muslims ― mostly because it has no Muslims to speak of. Belarus was not part of the Chechen war; it does not contribute troops to Afghanistan; it neither bans nor condones the hijab. This is a country of onion-domed Orthodox churches, where Catholics are a small minority.

One wonders how an Islamic terrorist would even find Minsk. The Belarusian capital is not a popular tourist destination, boasting few attractions that are not massively depressing: doleful war memorials, Chernobyl wastelands, the apartment that housed JFK assassin Lee Harvey Oswald.

What Belarus does have is a truly terrible president.

If, as the French philosopher said, “each nation has the government it deserves,” then Belarus must be atoning for some grievous offense in the distant past. Or else it is the price its citizens are paying for valuing stability above all else.

Every Belarusian over 65 remembers World War II, and their children grew up on the stories. One-quarter of the population was killed as the Germans marched eastward across what was then called Belorussia, only to retreat a few years later from Russia’s frozen steppes.

Now the population will tolerate almost anything, “so long as there is no war,” as the mantra goes. But they have a lot to put up with: a president who will not countenance dissent, is incapable of managing the economy, is largely isolated in the international community, and who cannot seem to open his mouth without making giant, if often humorous, gaffes.

Alexander Lukashenko, who has ruled the country since 1994, is a former collective farm chairman who sees no reason to allow Belarus to progress to the 21st century. He has been elected president four times, in highly dubious elections.

An avid hockey fan, he had an ice palace built where he played entire matches all by himself.

He also sponsored a cross-country ski race every year in Minsk to celebrate Belarusian Independence Day on July 3. The skis, unfortunately, had to be on rollers. And as the hale, hearty but aging president approached 50, it became harder and harder for his younger staff to hold back as they neared the finish line. Lukashenko wanted the appearance of competition, but everyone understood that beating out the president would not be good for one’s career.

But the fact remains that, with the older generation, who saw their cousins in Ukraine and Russia going through painful upheavals in the 1990s, Lukashenko is genuinely still popular.

There is a small but active group of dissidents who used to receive quite a bit of attention from European and American government groups. In 2001, “dump Lukashenko” campaigns were all the rage among Western diplomats, especially after the fall of Serbia’s Slobodan Milosevic in October 2000. Everyone wanted to be in on toppling Europe’s Last Dictator.

Lukashenko won his election by an overwhelming majority on Sept. 9, 2001. As he railed against the international community’s efforts to monitor the contest, Lukashenko let loose with my personal favorite among his frequent gaffes: “We do not need any imported systems for falsifying elections!” he shouted, waving his fist for the television cameras. “We are perfectly capable of developing our own!”

It is a measure of the solipsism of Belarus’ opposition activists that one of them suggested to me a few days later that Lukashenko may have organized 9/11 in order to distract international attention from the fraud of his campaign.

If so, it worked. As the wars in Afghanistan and Iraq soaked up money and energy, Belarus receded from the scene, barely registering on the media’s radar for the past decade.

Last December, following yet another badly flawed election, Lukashenko cracked down on his dissidents ― there were brutal reprisals against protesters, and many of the more prominent activists, including his main rival in the campaign, ended up in jail.

There is no reason to think that things will be any different this time around.

While it beggars the imagination that Belarusian activists would target the civilian population in an effort to destabilize the regime, this is doubtless a version of events that will gain traction as time goes on. Lukashenko has already tied the latest bombing to an explosion in July 2008, in which 40 people were injured but no one was killed. That act was thought to be the work of radical anti-Lukashenko elements, targeting the president at a Belarusian Independence Day celebration.

Now Lukashenko will most likely order the arrest of many of his more irritating opponents (those still free after December’s crackdown, anyway), some of whom may eventually be found guilty of one thing or another.

Meanwhile, the dissidents will almost certainly start circulating rumors, attached to “highly credible sources,” that Lukashenko himself had the bomb planted in order to switch the country’s focus from the failing economy to something a bit less mundane.

The economy has not been strong since it was divorced from Russia; the giant auto, radio and refrigerator factories have little market for their once-famous products.

The ruble is not quite at the low point it was when I arrived in January 2000; at the time we were getting over a million “zaichiki” to the dollar (the Belarusian ruble then had pictures of animals rather than state monuments; “zaichik” is the word for “rabbit.”)

Now the ruble trades at over 3,000 to the dollar, but it has been steadily declining. Hardy Minsk dwellers have reportedly been lining up to buy gold, gemstones and consumer goods, in an attempt to convert their eroding currency into something a bit more durable.

Now, on top of everything else, they have to try and piece together what happened on April 11. If all else fails, perhaps Belarusians will finally subscribe to the “Islamic terrorist” explanation ― it is better than no answer.

Lukashenko visited the site of the bombing on Tuesday, in the company of his young son, Kolya.

Kolya is a public figure at the age of 6 ― and something of a mystery, since his mother has never been publicly named. Kolya, which is short for “Nikolai,” is certainly not the product of Lukashenko’s marriage; his wife, the long-suffering Galina Rodionovna, has long been consigned to a dairy farm in the small town of Shklov. His two sons from that marriage, Viktor and Dmitry, have been given minor jobs in the government, but neither has shown great potential.

The president seems to dote on the little boy, and has been taking him everywhere, including to high-level international meetings, since Kolya was a toddler.

Some think that Lukashenko wants to hold onto power until his protege is able to assume command ― a prospect that fills many Belarusians with horror.

Should another Lukashenko take control, it will just strengthen the younger generation’s determination to get out. There are not that many young people left in Belarus these days. Of those I worked with 10 years ago, 90 percent are now gone. I visit them in London, Paris, Washington, Toronto, but their talent and enthusiasm are lost to their native land.

The bombing may bring people together, at least for a time; tragedy does tend to put other considerations in the background. But I am afraid it will not be long before the dead and injured become mere pawns in Belarus’ murky political games.

In the meantime, Al Qaeda & co. are probably scratching their collective head, trying to figure out how they are being blamed for a bomb in a country they may not be able find on a map.

Perhaps some semblance of the truth will come out eventually. Perhaps it will remain an unsolved mystery for years. Either way, it means more bad news for long-suffering Belarus.