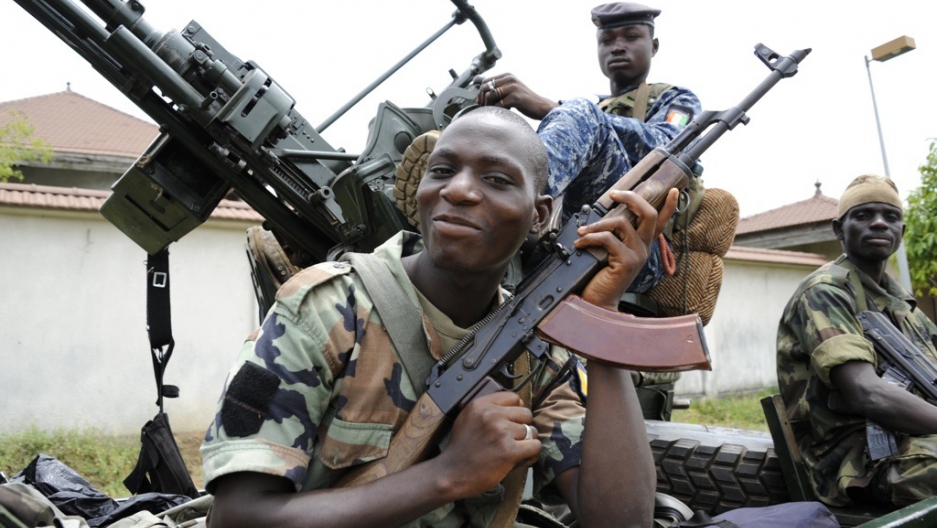 Pro-Ouattara militiamen on patrol in a district of Abidjan on April 13, 2011. Ivory Coast's President Alassane Ouattara said he would move into the palace once occupied by arrested strongman predecessor Laurent Gbagbo "in the coming few days."
Credit: Philippe Desmazes
Share

Describing how he intends to return Ivory Coast to peace and stability, Ouattara said he would set up a national peace and reconciliation commission in order to bring to justice anyone who had committed atrocities during Ivory Coast's recent turmoil.

"Reconciliation can't be done without justice," said Ouattara. "All Ivorians are equal in the eyes of the law, no matter their politics, their origin, their religion or their race."

Ouattara spoke to the press at the Golf Hotel, where he has had offices since the disputed November election. Outtara said Gbagbo has been moved out of the hotel, where he was held after his arrest Monday, and is now under guard in a house somewhere else in the country.

Ouattara said that he would leave the Golf Hotel and move "in the next few days" into the official presidential residence where Gbagbo had been holed up in the heavily fortified bunker until Monday.

To get Ivory Coast's economy back on track, the European Union and France are discussing an aid package for $850 million, according to the Christian Science Monitor. There are reports that Ivory Coast's economy could get back into gear quickly, with some economists saying the country's GDP could grow by 6 percent in 2011.

Gbagbo, a 65-year-old former history professor, refused to give up power after losing elections in November and his intransigence triggered a political showdown that led to a resumption of civil war in Ivory Coast.

On Monday Gbagbo's 11-year reign came to an end when he was arrested and handed over to Alassane Ouatara, the internationally recognized president who is backed by the United Nations.

Ouattara, a 69-year-old economist, intends to put his rival on trial and has ordered his justice minister to investigate the former president, his wife Simone and other members of his inner circle.

In a televised speech soon after Gbagbo’s arrest, Ouattara also pledged to establish a truth and reconciliation commission to investigate “all massacres, crimes or violations against human rights.”

November’s disputed election and the fighting that followed re-opened the ethnic, religious and regional divisions that triggered a civil war in 2002.

Analysts warned that "victor’s justice" now could worsen the splits. “Justice needs to be balanced and credible, not one-sided and vengeful,” said Alex Vines, head of the Africa programme at London’s Royal Institute for International Affairs.

Both sides are accused of atrocities.

The United Nations says that 536 bodies were found in the west of the country after pro-Ouattara forces swept through the town of Duekoue. In Abidjan, 400 had been killed even before heavy fighting erupted 11 days ago. Attacks in the city included the shelling of a market and the murder of female protesters allegedly by pro-Gbagbo forces.

The final death toll from the months of unrest is likely to run into the thousands, while close to a million have been forced to flee their homes.

The U.N. High Commissioner for Human Rights on Tuesday appointed a team of investigators to look into killings, abductions and ethnic massacres perpetrated by forces loyal to both Ouattara and Gbagbo.

Ouattara’s appeals to all Ivorians not to seek revenge seemed to have fallen on deaf ears as the streets of Abidjan continued to echo with gunshots despite several of Gbagbo’s generals pledging allegiance to the new president.

In his final defiant weeks, Gbagbo armed gangs of young men inciting them to defend their country against what he claimed was a foreign conspiracy to overthrow him led by the former colonial master France.

That claim was repeated by one of Gbagbo’s spokesmen after the former president’s arrest. “It was a coup d’etat which had no other aim but to gain control of the resources of Ivory Coast,” Alain Toussaint told reporters. France, which played a decisive military role in ending the stand off, denies arresting Gbagbo.

In response to the violence of Gbagbo’s militias, pro-Ouattara neighborhoods in Abidjan formed and armed their own paramilitary groups.

“Our work isn’t finished yet,” said Tahirou Sanogo, a pro-Ouattara vigilante manning a roadblock in the Adjame district of Abidjan, according to Reuters. “We’ve still got the mopping up to do.”

Reports of heavy weapons fire in some pro-Gbagbo parts of the city suggested what “mopping up” might involve.

Reprisal killings also seem to have taken place in the pro-Gbagbo neighborhood of Yopougon where at least 14 young men had been shot dead overnight, some killed execution-style with a bullet to the head, according to residents.

There were other reports of reprisal killings in rural areas too.

“Dozens of young people are going into hiding in Abidjan out of fear for their lives,” said Veronique Aubert, Amnesty International’s deputy director for Africa. “In the western part of the country people suspected of being pro-Gbagbo are also terrified. Many are hiding in the bush after their villages were burned down and they need to be protected,” she urged.

Vines said the continued violence was no surprise because of “the real hatred” between the two sides. Ouattara draws most of his support from northern Muslims while Gbagbo commands the loyalty of mostly southern Christians.

Ouattara won 54 percent of the presidential vote and now faces the huge task of healing the deep rifts in the world’s biggest cocoa exporter.

Observers say he will have to reach out to Gbagbo’s former allies in a bid to form a government of national unity but that task will be more difficult with Gbagbo facing the potential humiliation of a trial and imprisonment.

As well as an Ivorian government investigation and the U.N. inquiry, the International Criminal Court in The Hague has said it might bring charges against Gbagbo and others.

French prosecutors are also expected to consider bringing criminal charges over the 2004 abduction of French-Canadian journalist Guy-Andre Kieffer who disappeared while investigating allegations of corruption involving Gbagbo and his wife. He is presumed to have been murdered.