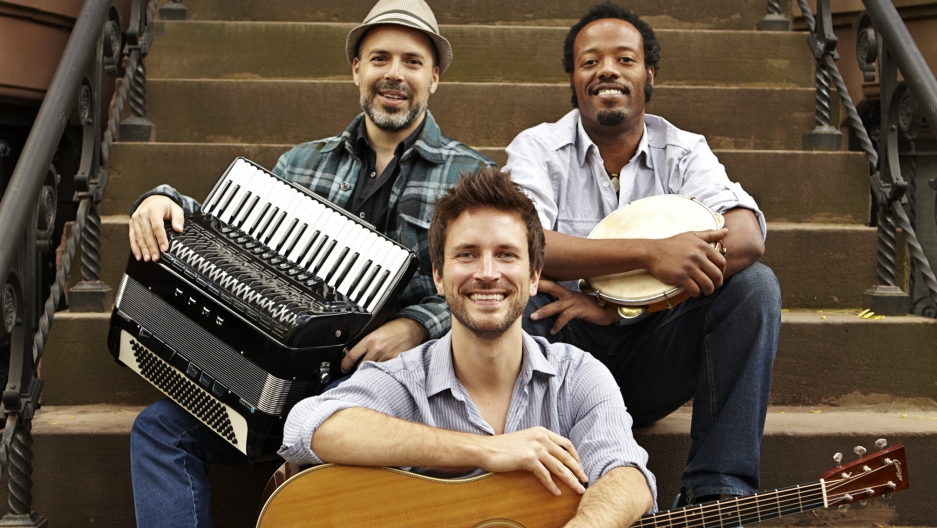 Share
By Alex Gallafent Guitarist Clay Ross grew up in South Carolina. He made a name for himself on the music scene there, but he always had some reservations about his home state—and its local music, including bluegrass. Ross said, "A lot of the rural music that I was exposed to as a kid I associated with a sort of xenophobia and racism. You know, growing up in the south I had cousins and other family members that had opinions that I didn't necessarily agree with." So Clay Ross went in another direction. In Charleston he happened upon a group of talented young jazz players, including three black musicians who became close friends. "They took me under their wing and we started a band together called The Gradual Lean," said Ross. "We named it that because when people heard us they would gradually lean forward." The band was a hit in Charleston, but Ross still couldn't escape being partly defined by his race. This time it was the pressure he felt as a young white kid to prove himself in a community of mostly black musicians. So when he turned 23, Clay Ross did what jazz musicians do. He moved to New York. First Steps "One of the first artists I met when I came here, at a jam session at Small's, was a Spanish accordionist named Victor Prieto," recalled Ross. "He was the one who exposed me to more Latin styles of music, including Brazilian chorinho, and it was very exciting." Chorinho is a musical style from Rio de Janeiro. Ross thinks of it as sort of a Brazilian ragtime. But that was just the first step for Clay Ross. In New York he sought out Brazilian musicians, or anyone playing Brazilian styles. And he quickly built up a reputation as a guitarist who could bridge jazz and music from other parts of the world. Finally, Ross actually went to Brazil— first to Rio, and then, in 2007, to the city of Recife, a port city in the northeastern tip of Brazil. "It's the point closest to Africa," said Ross. "If you look at a map you can really see how close it is to Africa." It turned out to be close to somewhere else too. "Right when I got there I said, 'Oh my god this is exactly like Charleston.'" Home Away From Home Like Charleston, Recife was a hub for the transatlantic slave trade, built up under the influence of European colonial powers.. "Then as I started to learn the music.. it sort of dawned on me. There was one song in particular that I heard. It's a song called Voa Ilza by Hermeto Pascoal that to me, the first time I heard it, right away, it sounded like a fiddle tune. It sounded like a bluegrass fiddle tune." For Clay Ross, that was the moment everything started, including the idea for his band, Matuto, based in New York. The band's publicity material describe the music in terms of a Brazilian carnaval in the Appalachian Mountains. Indeed 'Matuto' is Brazilian slang for 'country boy' or 'hillbilly', but without the negative connotations you find in the US. For Clay Ross, the name Matuto summed up a kind of rural philosophy. "A sort of sage wisdom about being content on the hillside, on the sertao, which is the desert." Clay Ross said he's come a long way from his early rejection of bluegrass. "I can't tell you how much it's changed me. It's just allowed me to embrace a lot of things that I was closed off to before, which I guess is the point now that I think about it. I was doing everything that I was critical of family members or other people in my life doing in a social context: I was doing that musically." Clay Ross finally made peace with bluegrass, with the music of his home. He just had to go to Brazil to do it.