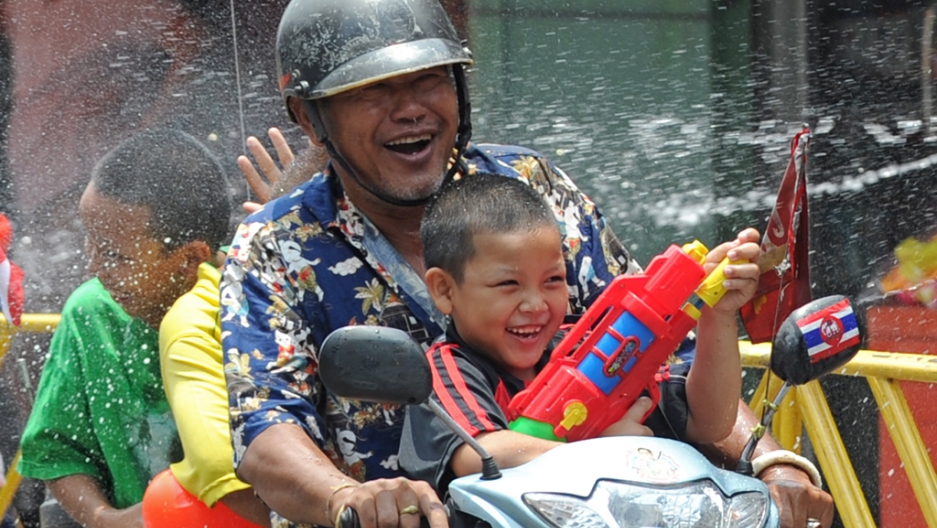 Thai children spray water at each other on Khaosan road during Songkran festival in Bangkok on April 12, 2011.
Credit: Pornchai Kittiwongsakul
Share

The work stops. Families reunite. The young bless elders with a ceremonial cleansing ritual: the sprinkling of water across the hands or shoulder.

This is where the Ministry of Culture-approved Songkran ends. Thais also know their signature holiday as the “Seven Days of Danger,” a period of excess that can leave more than 500 dead.

From 2000 to 2010, about 5,050 died and 187,300 were injured from accidents during April’s Songkran week alone, according to figures compiled for GlobalPost by the government-funded Thai Health Promotion Network.

The culprits? Water guns, moving vehicles and lots of booze.

“When Songkran comes, you stay drunk. Open your eyes, wash your face off and — boop! — start drinking again,” said Songsak Samtha, a 43-year-old motorbike taxi driver who works in Bangkok. “If you stop, your friends walk by and say, ‘Hey! You drunk yet?’”

A few decades ago, the chaste sprinkling of water upon grandma’s fingers mutated into something much more raucous: a no-rules, boozy H2O street war.

During Songkran 2.0, it is socially acceptable to chuck freezing water in a stranger’s face — even if that stranger is doing 35 mph on a motorbike.

Adults and kids alike prowl the streets with water cannons. Their preferred attack vehicle is a pick-up truck, gunmen squatting in the bed like a Somali militia. They typically reload from a trashcan full of water.

The goal is to thoroughly soak passersby down to their underwear. Extra points are awarded for direct hits on foreigners or anyone clueless enough to walk outside in work attire. Many locals cower inside until the week is over.

Social guidelines become as slippery as the sidewalks. Young girls, normally bound by strict rules of etiquette, can approach the boy of their liking and smear his face and neck with goopy powder. Men are forgiven for replacing breakfast with a $3 pint of cheap whiskey.

Songkran is as fun, and lawless, as it sounds. The air of recklessness and massive alcohol consumption, paired with driving, leaves the nation bracing for hundreds of fatalities. TV stations run a death toll each night on the evening news.

This has convinced a small-but-politically connected contingent that there is only one solution: banning all alcohol sales during the holiday.

Alcohol is the driver of Songkran deaths, said the director of Thailand’s government-affiliated Stop Drink Network. His name name is, ironically, Songkran Pakchokdee.

The network has floated its booze sale prohibition proposal in parliament, Songkran said. It has never passed. The idea remains unthinkable to many Thais.

“Impossible,” said Songsak, the motorbike driver, who plans a 10-hour trek to his home province of Srisaket. “No booze means no fun.”

But the Stop Drink Network is undeterred. “They say, ‘People will just stock up beforehand.’ We say, fine, but when they run out at least they can’t buy more. Everyone’s scared no tourists will come. We say, OK, we can exempt alcohol sales at hotels.”

Heavy Songkran deaths began in the 1980s, said Stop Drink Network’s manager, Theera Watcharapranee. That decade, and most of the 1990s, were a period of heavy economic growth that afforded many Thais enough income to buy cars and motorbikes. According to World Bank statistics, the number of vehicles in Thailand quadrupled from 1987 to 1997.

“Of course people got drunk during Songkran 50 years ago,” Theera said. “They just didn’t have vehicles.”

The Stop Drink Network’s anti-booze crusade is pit against two extremely powerful interests: the tourism and alcohol industries. Foreigners flock to Thailand for Songkran, now heavily promoted by the Tourism Authority of Thailand. The alcohol industry is even stronger, Theera said.

“They target this week to increase their market share,” he said. ”You’ll see a lot of promotions this week.”

Songkran carnage is amplified by the holiday’s homecoming tradition. For provincial Thais working in Bangkok, Songkran is a rare opportunity to return home to see family and hometown friends. As the traffic increases, and bottles are tipped, the road deaths mount.

“You have to stay on guard all the time,” said Worawut Kaewkongmul, a Bangkok 17-year-old who goes by the nickname “Beer.” (“My parents gave it to me,” he explained, “because dad likes beer.”)

Worawut recalls witnessing a particularly ugly Songkran death years ago, a motorbike-on-car smash-up that left the bike driver splayed bloody on the street. “There are people drunk, flying around without helmets. It’s normal,” he said. “I just stick to the public bus.”

But moments after recounting the accident, Worawut talked excitedly of his Songkran plans: doting on his parents by day and dousing strangers come sundown.

“I love Songkran,” he said. “It’s part of the Thai identity. No country does it like us.”