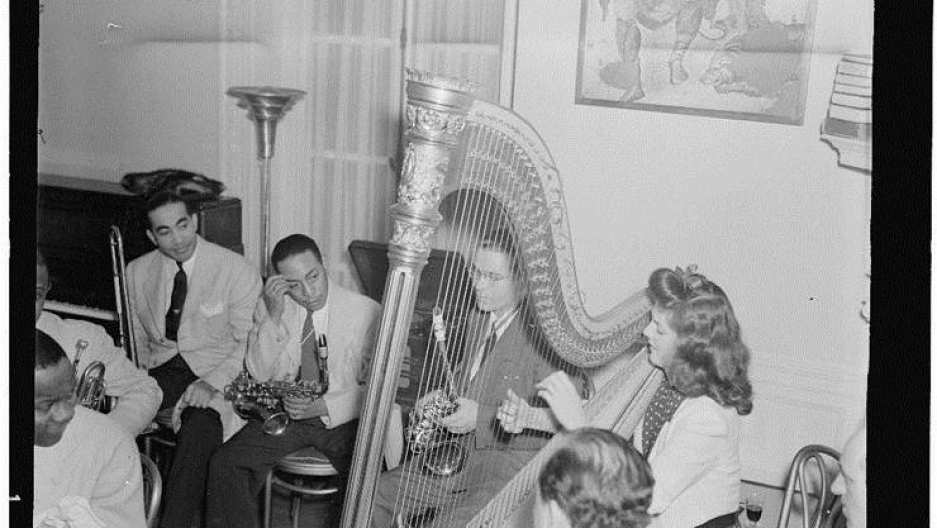 Share
By Bruce Wallace The Washington residence of the Turkish Ambassador to the United States has high ceilings, dark wood and lots of ornamental nods to the country it represents. The American architect who designed it spent years in Istanbul immersing himself in Ottoman culture. On March 1, though, the halls of the residence echoed with a different sort of culture. Jazz pianist Orrin Evans and his trio led off a series of concerts inspired in part by a history that goes back to 1934. That was the year that Mehmet Ertegun became the Republic of Turkey's second ambassador to the US. You may have heard of his sons, Nesuhi and Ahmet Ertegun. They're legendary figures in American musical history. "When I first came to Washington I thought I was coming to the land of jazz," Ahmet Ertegun said in a 2005 interview with Charlie Rose. Soon after he arrived in Washington, he headed downtown to the city's main record store. No black music "There were no records by Louis Armstrong," Ertegun said. "It was a lily-white record shop that only sold pop music, no black music. And a very nice little lady came up to me – I remember her name, it was Ms. Timmons – and she said 'I know what you're looking for. You go to Seventh and T. There are some record shops around that area. They have the records you're looking for." He found the records, and, nearby, the Howard Theatre – the city's main venue for black music. He and his brother became regulars, and they started inviting musicians they saw there back to their place. "On Sunday, we'd have lunch at the Turkish embassy and after lunch we'd have a jam session," Ertegun said in the 2005 interview. "We had the Ellington band, we had guys from the Louis Armstrong band, Benny Goodman, Tommy Dorsey." Delia Gottlieb and her late husband, jazz photographer William Gottlieb, were close friends of the Ertegun brothers (she calls them "the boys") and regulars at the Erteguns' embassy sessions. "They were wonderful, that's all I can tell you, they were totally informal," Gottlieb said. "There's something special about that kind of intimacy, where somebody is performing, and they can sense and feel that everybody there is responding and they're all getting it." At the time, Washington was still deeply segregated, so the fact that these sessions were racially integrated was significant. And it ruffled some feathers. One senator sent Ambassador Ertegun a letter, according to the current Turkish Ambassador, Namik Tan. The letter spoke of passing by the embassy every morning. "I see so many black people before your front door just coming in and out," Ambassador Tan paraphrased from the letter: "Is what I see true?" The senator went on to write that the custom of segregation was for black people to enter through back doors. Tan said that Ambassador Ertegun wrote back, saying, you're right about what you're seeing at our residence, "because we have the tradition of hosting our friends through our front door. And in the future, of course, we would love to have you visit our embassy residence, and you would be definitely welcome through the back door." Ahmet Ertegun went on to found Atlantic Records. He recorded hundreds of artists, from Ruth Brown and Ray Charles to Led Zeppelin. Nesuhi brought on board jazz greats, including John Coltrane and Charles Mingus. Music writer John Broven said the Erteguns' early willingness to cross racial boundaries to hear the music they loved eventually led them to record music that major labels ignored. Breaking down the color barriers "They spotted a gap in the R&B market that eventually became rock 'n' roll, and they were very instrumental in helping to break down the color barriers," Broven said. There were passing reminders of America's racial history at Orrin Evans's concert at the Turkish Ambassador's residence in March. Delia Gottlieb, who was at the concert, said when Evans did the last number, he inserted a few phrases from the song, 'Lift Every Voice and Sing.' The spiritual has long been known as the "Black National Anthem." But Orrin Evans later said not to read too much into that song choice. "It wasn't for any particular reason, to be honest," Evans said. "I did this because it felt good." There is one song he wishes he'd put on the set list. "The only thing I would have done different is do an arrangement of the Turkish national anthem."