Artistic greats can seem like a different breed, privileged to experience the kind of creativity we can only dream about. So it's nice to learn that sometimes even masters turn to others for inspiration.

Recently, Kurt Andersen caught up with Steven Soderbergh at New York's Pratt Institute and came back with a nice little morsel --- a list of Soderbergh's cultural diet, broken down day by day, for the last year.

Turns out that Soderbergh is a voracious reader, devouring tomes by Jonathan Franzen, Barbara Kingsolver, and David Foster Wallace in what appears to be mere days. And while his grueling work schedule might be part of the reason he soon plans to retire, he carved out time to work on his other creative love, painting.

Of course, he also logged many hours in front of film, working on his upcoming Haywire and The Man from U.N.C.L.E., as well as watching old favorites including The Godfather (1 and 2 only), Last Tango in Paris, and Raiders of the Lost Ark (three times in one week!).

Also included was "an almost comically basic syllabus" for those interested in breaking into the film industry. For a tutorial in black and white cinema, he suggests The Long Voyage Home, Mademoiselle, and Lenny. For editing, he turns to Jaws, Election, and The Graduate. 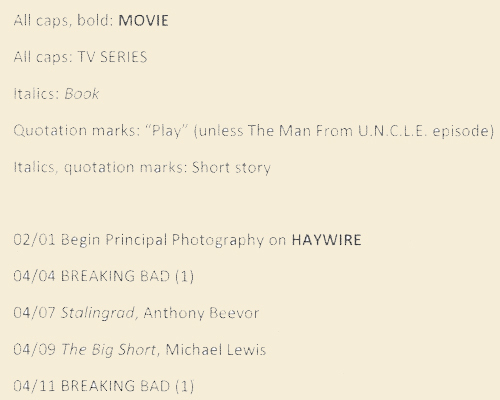 Want more recommendations from the art world's greats? We found Designers and Books, a site that provides us with just that: Milton Glaser (the mastermind behind the I Love NY logo) is a big John Berger fan, while fashion designer Cynthia Rowley has a soft spot for Calvin Tomkins.

The lists --- updated each week with a new designer --- include picks from architects, as well as designers in the fashion, lighting, and graphic worlds. It seems no matter what the artistic endeavor, everyone needs a little more than their Wheaties to get the juices flowing.