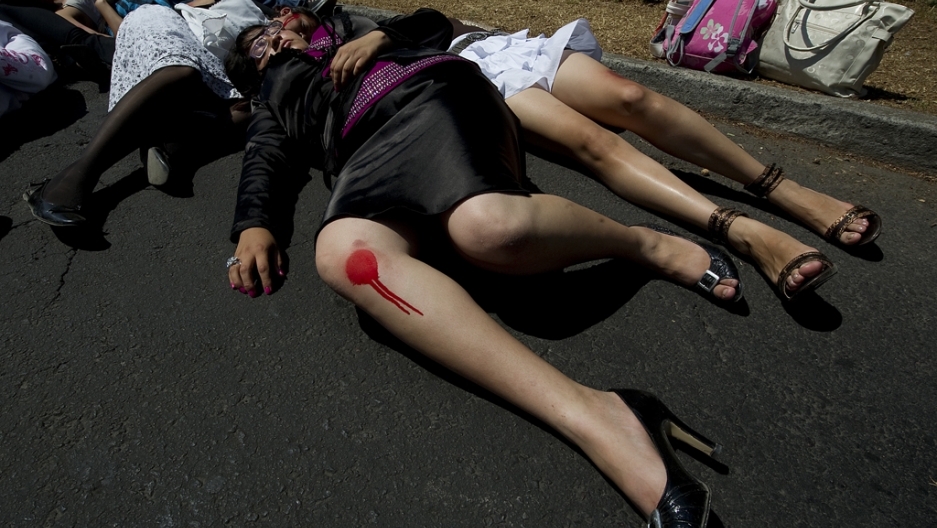 A group of women take part in a performance during a protest against the killing of women within the commemoration of the International Women's Day in Mexico City, on March 8, 2011.
Credit: Luis Acosta
Share

MEXICO CITY, Mexico — The anxious men and women crowded around the morgue in the border city of Matamoros clutching photos of their loved ones.

They held pictures of a middle-aged car dealer, a young student, a wrinkled grandfather — all last seen taking busses toward the Rio Grande south of Texas.

On Friday, police began identifying 72 corpses dug up from horrific mass graves discovered in the nearby countryside with the grieving relatives.

Most had no obvious link to the war over Mexico’s billion-dollar drug trade that has been tearing the country apart. Police pondered whether the massacres stemmed from kidnappings for ransom, a mistaken identity, or just a terror tactic to send a message.

Whatever the motives, it is clear that Mexico has suffered from a sharp increase of innocent victims as the drug war rages on. In reaction, Mexicans are increasingly taking to the streets screaming that they have had enough.

As police first began unearthing the mass graves on Wednesday, Mexicans marched in 38 cities bearing placards with the slogan, “Ya Basta” — enough. Sporadic marches and vigils in plazas continued over the weekend.

The explosion of popular protest against the violence creates a new factor in Mexico’s drug war, which has steadily intensified since President Felipe Calderon took power in 2006 and launched an offensive against gangs.

“There has been an important sea change of opinion,” said John Mill Ackerman of Mexico's National Autonomous University. “People are no longer buying the story that things have to get worse before they get better.”

However, the demands from this emerging movement are very mixed.

The protesters call on the criminal cartels to stop attacking innocent people, but also criticize abuses by soldiers fighting these gangs.

Some say the war on drugs has failed and the government should legalize narcotics. Others demand more protection from kidnappers and extortionists.

At the forefront of the demonstrations is journalist and poet Javier Sicilia, whose son Juan Francisco was killed in late March.

A 24-year old student, Juan Francisco Sicilia was last seen alive going to a bar with six friends in the spa town of Cuernavaca.

The friends reportedly had a loud conversation about the drug war. All seven were later found dead in a car next to a note that said, “This is what happens to those who make anonymous calls to soldiers.”'

“This pain of losing a son has no name because it is unnatural,” Sicilia wrote in an open letter addressed to politicians and criminals. “From this suffering, from this indignation that these deaths have caused, we are f---ing sick of it.”

Sicilia initially caused a stir by telling reporters that the government should make a pact with cartels to stop the violence.

However, on Friday his comments took a less controversial tone, as he argued that all members of society should come together.

“We have to create a national pact between everyone,” Sicilia told journalists from the plaza in Cuernavaca where he has been leading a camp for peace. “We have to leave behind ideological struggles, and political parties, and think of refounding the nation.”

Calderon has insisted he will not back down in his fight against drug gangs, which has seen record busts of cocaine and drug money, and dozens of kingpins shot down or arrested.

In an apparent answer to the protests, the Federal Security Department spokesman Alejandro Poire on Thursday read a statement reiterating the justifications for the war on crime.

“There will be no solution to the violence without justice,” Poire said. “This is one of the reasons that motivates the National Security Strategy and the decision to confront with firmness those that break the law.”

However, Mexico will hold presidential elections next year and Calderon is banned by the Constitution from standing for a second term.

Whoever takes power, analysts say, will likely rethink the security strategy and could move away from the war on drugs approach.

“The war of Calderon has not stopped drugs being trafficked and has seen a horrific amount of harm to the public,” said historian Lorenzo Meyer. “It is obvious that something is not working.”