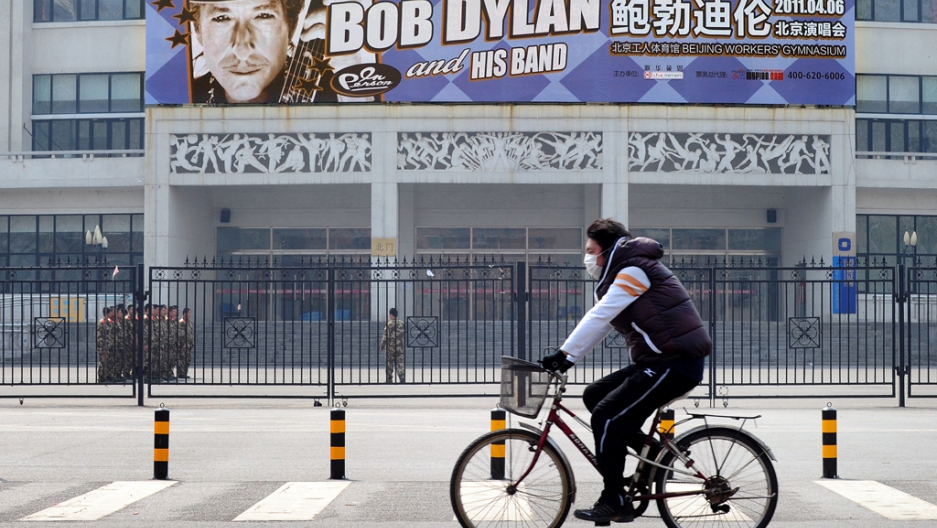 HO CHI MINH CITY, Vietnam — When Bob Dylan plays in Ho Chi Minh City on Sunday, it will be the biggest concert Vietnam has seen in a while, or at least the biggest international artist.

The Backstreet Boys, the American boy band that hit its peak in the late 1990s, toured the country in March. Concerts in Ho Chi Minh City and Hanoi attracted tens of thousands.

But both shows were the exception, not the rule. For most overseas acts, Vietnam, which requires touring artists to submit their lyrics ahead of time, has remained almost entirely off the radar.

China, too, has seen a dearth of foreign rock stars — especially since Icelandic singer Bjork's famous outburst of "Tibet! Tibet!" during a 2008 performance of her song "Declare Independence."

But U.S. music legend, Bob Dylan, has taken it upon himself to buck the trend once again. The king of the protest song will visit both China and Vietnam this week.

He made his first appearance in Beijing on Wednesday, playing a preapproved set that was notably missing such ballads of dissent as "The Times They Are A-Changin'" and "Blowin' In the Wind." A show in Shanghai followed Friday.

On Sunday, Dylan, who skyrocketed to fame during the anti-Vietnam War 1960s, will play on the grass of the Royal Melbourne Institute of Technology University in Ho Chi Minh City.

In Vietnam, MTV is popular. It seems everyone under 25 is a Lady Gaga fan. Pop music which was once banned caterwauls out of karaoke parlors in almost every city and town up and down this country of some 86 million. Hallyu, or the wave of Korean pop culture, is as popular in Vietnam as it is elsewhere in Asia. When the Korean superstar Rain came in 2006, he conquered.

Australian Rod Quinton of Saigon Sound System, which is organizing Dylan’s Vietnam trip, says that the demands of Vietnam's youth have grown right along with the middle class.

"Now there are young, aspirational people with money in their back pockets and access to the internet and cable TV. They get tired of watching MTV or Channel V and seeing Bon Jovi performing in Singapore but not here," he told GlobalPost.

But this younger generation was born long after the American war in Vietnam, when Dylan wrote some of his most well known songs, and most haven’t heard of him.

Twenty-one-year-old Ly, interviewed at Yoko Cafe, a live music venue just outside downtown’s District 1, said she had no idea Dylan was performing in Ho Chi Minh City and has no plans to go to his concert.

Ly said she has heard of Dylan but prefers Celine Dion. She loves pop and jazz the most. “In recent years people love to listen to English songs, such as pop, rock and jazz,” she said.

Like many other Vietnamese, young and old, she’s a fan of Trinh Cong Son. Son, who had long been referred to as "Vietnam’s Bob Dylan," died 10 years ago. The heavy drinking pacifist was disliked by both sides during the Vietnam War — Viet Cong and ARVN — but finished his days as one of the nation’s most well known singer/songwriters. A tribute to him will open Dylan’s show.

“There is a deep need inside the soul to understand [Son's] songs. Trinh’s songs have become a brand name nowadays,” said Ly.

Small music cafes where young people play guitar are still popular in Vietnam, especially in Hanoi, and they aren't dissimilar to the coffee houses of Dylan’s early days. One of the better known cafes is above a shop selling knock-off brand name backpacks opposite the central Hoan Kiem Lake. It's as shabby as any student cafe and, unlike the rest of the city, hasn’t really changed in years.

Nguyen Duc Hoang, a 22-year-old student hanging out at the cafe said he's heard of Dylan and saw mention of Sunday's concert on Zing, a popular local internet forum, but he hasn’t heard any of Dylan's music.

"It would be great if more international musicians come to Vietnam. Recently, so few have come,” he said, adding: “I listen to Trinh Cong Son when I’m sad and want to be alone because his lyrics are beautiful.”

Hoang says he listens to a lot of music online because Hanoi has so few affordable live music venues. “There are some expensive places but they are not for young people,” he said.

There are live music venues but they are few and far between and usually tiny when they do exist. The now-defunct Heresy Rock Cafe was nothing but a collection of inch-high wooden stools, Black Sabbath and Led Zeppelin posters and a stack of amps, all shrouded in a thick cloud of cigarette smoke. A painting of black-robed Death, an American metal band popular in the 1980s, playing a bleeding electric violin adorned one wall.

The newer Hanoi Rock City in the nation's capital is, by all reports, attracting larger crowds and bigger acts.

Rockstorm, a yearly concert series, tours the country with a line up of rock and metal acts and these days corporate sponsorship, especially by liquor companies – Jagermeister is involved with death metal heroes Black Infinity – has helped. Tiger Beer sponsors events and helped bring Australian act Regurgitator to Hanoi in 2008.

But for the overseas acts now so popular here, it’s harder.

“Rockstorm’s been a fantastic thing,” said Nick Greenfield, part of CAMA Productions which has brought acts like Girltalk, Ratatat and Dengue Fever to Hanoi. But “in Vietnam there’s a lack of venues which is a major issue. As a result the market for live music is very limited and what people have been exposed to is very limited.”

“The scene here is very, very young,” he said.