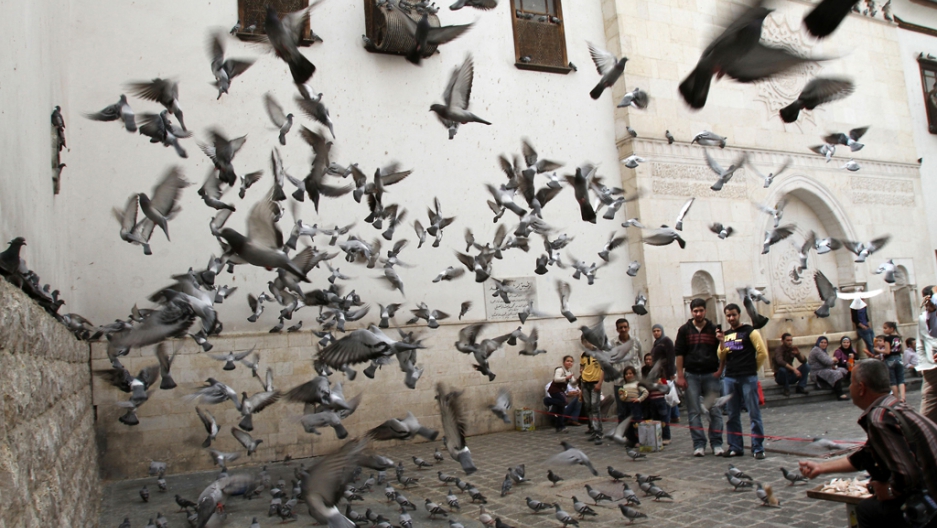 DAMASCUS, Syria — They’re known to the locals of Lattakia as the ghosts — Al Shabeha — but when these phantoms dress up, it’s in black and their terror is tangible.

In a port city dominated by Sunni Muslims, which comprise three-quarters of Syria’s population, and surrounded by mountain villages that are home to Alawites, a minority that has ruled over the country for 40 years, these roaming gangs of black-clothed armed thugs have turned peaceful, united protests calling for freedom into violent, deadly chaos.

Syria’s President Bashar al-Assad warned in a speech last week that such gangs were part of a “huge conspiracy” by “foreign elements” attempting to drive a wedge between Syria’s different religious and ethnic communities.

But GlobalPost has gathered testimony from residents, journalists and eyewitnesses in Lattakia and almost all say the same thing: the shabeha instigating and fueling violence against protestors are almost exclusively Alawites from the region, described by one source as the private militia of the Assad family itself.

It was just such plain clothes security that was suspected of opening fire from rooftops and the street last Friday into a large crowd of unarmed demonstrators calling for freedom in the Damascus suburb of Duma, killing at least eight people. Video posted to YouTube shows what appear to be snipers in civilian clothes firing from rooftops as protesters cry out below.

Straddling Iraq to its east, which descended into sectarian slaughter after the U.S.-led invasion, and Lebanon to its west, where competing religious identities fueled a 15-year civil war, the specter of sectarian strife looms large in Syria’s national psyche.

“The president has said Lattakia is a sectarian problem firstly to get carte blanche to quell it — no one wants to see a new Iraq,” said a local political analyst who asked not to be named for security reasons. “And second in order to mobilize minorities, Alawites, Christians and Druze out of fear of life under a Sunni majority. They argue it’s the regime or the Muslim Brotherhood.”

Yet eyewitnesses to the pro-democracy protests in Lattakia over the past fortnight insist they began with both Sunnis and Alawites calling for change together.

“The protesters were chanting, “Freedom, freedom” and “No Sunni and Alawites, we are all Syrians,” said Hiam Gamil, a youth activist in Lattakia.

An eyewitness to a demonstration in Lattakia, an Alawite, said a peaceful protest on March 26 had descended into deadly violence after snipers on rooftops shot at both anti- and pro-regime demonstrators. At least 12 people were killed.

“Then we saw cars with armed men in the streets shooting at people indiscriminately, Alawite, Sunni, pro-regime or against the regime, everyone,” he said, adding that Lattaki was now “in a state of terror.”

“The regime has made sure that no one goes down to protest in Lattakia … They split Lattakia in two and the tension will remain. The excuse of sectarian conflict succeeded, unfortunately,” the eyewitness said.

As the source predicted, the authorities later claimed outsiders had instigated the fighting.

“It is obvious Syria is the target of a project to sow sectarian strife,” Buthaina Shaaban, the president’s adviser, told Sana, the state news agency on March 26, a few hours after the deaths in Lattakia.

Ali, a middle aged Sunni shopkeeper from Lattakia, described a separate demonstration last Friday in which hundreds of worshippers had taken to the streets calling for freedom.

“Hundreds of security men in plain clothes shouting pro-Assad slogans came and started to push us,” Ali said. “It was then that the security forces began to fire on us.”

A local journalist who spoke to 10 residents of Lattakia over the past week said they had all delivered the same message about who the agitators roaming the streets were.

“All of them are saying one thing, ‘They are shabeha’,” he said.

A Syrian political expert, who declined to be named, said he had no doubt the shabeha had been used on the streets of Lattakia.

“They are the ones who are on the streets shooting people,” he said. “It’s a kind of out-sourcing: They are the regime, but they’re not the regime. The regime doesn’t want to take the risk of using an official security body to start the shooting of protestors.”

Begun in the 1970s, when Hafez al-Assad, the president’s father, took power, the shabeha are nothing new to many Syrians but remain largely unknown to those outside the country.

With easy access to arms through their close ties to Syria’s military and security forces, the shabeha, according to a number of experts on Syria, hail from the mountain stronghold of Qardaha, which overlooks Lattakia, and answer to the orders of local Assad family elders.

The gang’s wealth, according to experts, comes from distributing goods imported tax-free through Lattakia’s port, which they control.

“Syrian security has used the shabeha in Lattakia and armed them to spread fear in the city and say to the Syrian people that the freedom you wish for will bring sectarianism,” said Radwan Ziadeh, director of the Damascus Centre for Human Rights Studies and a visiting scholar at the Carr Centre for Human Rights at Harvard University. “They are the sons and brothers of the Assad family.”

Nadim Houry of Human Rights Watch in Beirut, who has been gathering reporting on Syria, said he had also heard eyewitness accounts of the shabeha being used in Lattakia.

“People we have spoken to in Lattakia said the shabeha had been responsible for shooting at demonstrators and had even injured police who were trying to intercede between the shabeha and the protesters,” Houry said.

Local activists have documented the killing by security forces of at least 173 Syrians during the violent crackdown against the unprecedented protest movement, which last Friday saw tens of thousands demonstrating in major cities across the country.

But if the shabeha are seeking to divide, the protesters appear fully aware of the dangers.

“One, one, one!” chanted hundreds of worshippers trapped inside Damascus’ Al-Rifai mosque on Friday, after security forces refused to let them leave following prayers, fearing mass demonstrations.

“People of Syria are one!” they cried.

A second GlobalPost reporter, who cannot be named for security reasons, contributed to this article from Damascus and Lattakia.