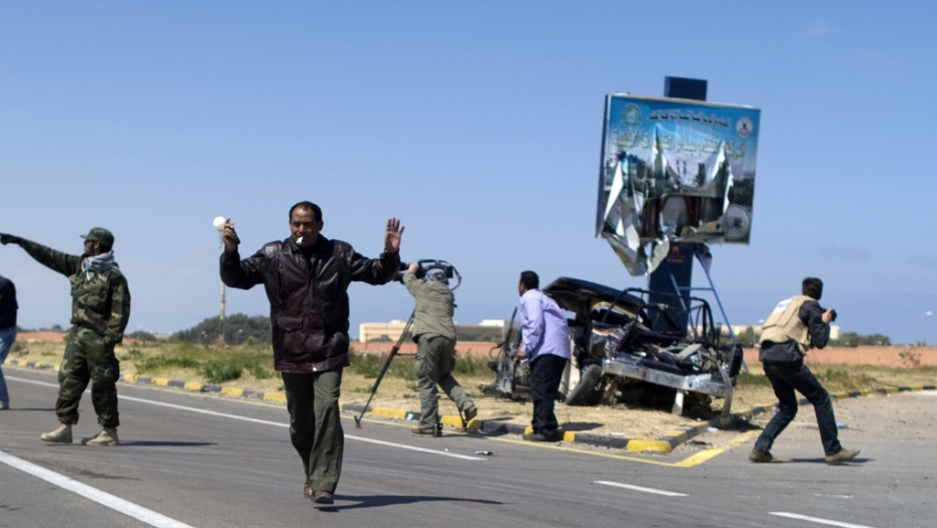 Rebel fighters and journalists run for cover as troops loyal to Moamer Kadhafi fire at the entrance of the university of the key oil port of Brega on April 4, 2011.
Credit: Odd Andersen
Share

The four were driving in a van near Brega on Tuesday when they were halted by nearby shelling. Gaddafi forces captured the journalists and released the driver, according to eye witness reports relayed to GlobalPost through Human Rights Watch. The journalists’ whereabouts are unknown.

The alleged detention is one of more than 70 attacks on the media covering the war, according to the Committee to Protect Journalists, which is keeping a log.

These include “two fatalities, a gunshot injury, 41 detentions, 11 assaults, two attacks on news facilities, and the jamming of Al Jazeera and Al Hurra transmissions,” the committee stated. Additionally, “at least six local journalists are missing amid speculation they are in the custody of security forces.”

On March 15, four correspondents from the New York Times were captured by Gaddafi’s forces near Ajdabiya, after their driver “inadvertently drove into a check point,” the Times reported. The four journalists had entered Libya by crossing the Egyptian border without visas in the early days of the fight, to cover the rebel-held areas in the east.

During their six days in captivity they were tied up, beaten and threatened, before being flown to Tripoli where they were well-treated, they reported. Meanwhile, the Times had launched in intense search effort, eventually winning promises for their release with the help of the Turkish diplomats. The negotiations were tense, however. For three days, the Libyan government repeatedly changed the terms. In the meantime the allies launched the air campaign against Gaddafi’s forces. They were freed on March 21.

Reporters working for other media outlets are still unaccounted for. A female Syrian reporter has been missing since March 28. Three Al Jazeera journalists arrested on March 16 are still being held in western Libya, according to Reporters Without Borders. The three are from Mauritius, Norway and the United Kingdom. A fourth Al Jazeera correspondent, from Tunisia, was released on March 31.

In recent days, Gaddafi’s government has been moving to deport foreign reporters. Journalists from 20 news organizations — including CNN, Fox News, the New York Times and the Los Angeles Times — have been told to leave the country by April 9, according to npr.org. Some of the journalists had visas that were expired and were waiting for renewals, while others are being expelled despite having valid visas, the site reported.

On Wednesday, the names of 26 foreign journalists being expelled from Libya were posted in the lobby of the Tripoli hotel where they were staying, according to Reporters Without Borders.

(Watch videos and read stories from James Foley about Libya and Afghanistan.)