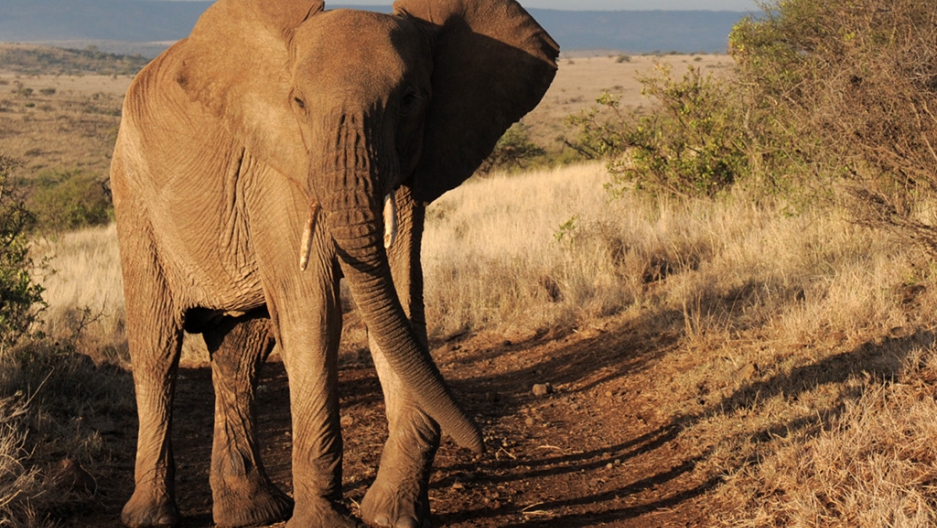 There has been a sharp increase in elephant poaching in the communities adjacent to northern Kenya's Lewa Wildlife Conservancy, where this photo was shot.
Credit: Roberto Schmidt
Share

NAIROBI, Kenya — Many blame China for the rise in elephant killings in Africa.

The growing appetite for ivory in Asia, coupled with the increasing influence of China in countries across central and southern parts of Africa, has led to more elephants being killed for their ivory tusks.

In the latest incident to point to this trend, Thai customs officials seized two tons of ivory hidden in the hold of a ship arriving from the Kenyan port of Mombasa.

The 247 tusks discovered on March 30 are thought to are estimated to be worth about $3.3 million, illustrating the lucrative nature of a global illegal trade that threatens to decimate Africa’s wildlife.

The head of Kenya’s wildlife authority blamed the Chinese for the slaughter of more than 100 elephants and 20 rhinos in this East African country alone last year.

“Ninety percent of all the people who pass through our airports and are apprehended with illegal wildlife trophies are Chinese,” said Julius Kipng’etich, director of the Kenya Wildlife Service (KWS).

China is investing billions in Africa every year in deals that swap roads and railways for the minerals and natural resources that fuel its growing economy. But wildlife experts say there is a dark side to the Chinese presence.

“China is the major driver for trade in ivory and that is linked to China’s phenomenal economic growth, the level of disposable income there, a re-embracing of traditional culture and status symbols in which ivory plays a role and the phenomenal increase of Chinese nationals on the African continent,” said Tom Milliken, regional director for east and southern Africa at TRAFFIC, a group which monitors the global wildlife trade.

An embassy cable written by the United States ambassador to Kenya, Michael Ranneberger, in February last year and published by the website WikiLeaks said: “KWS noticed a marked increase in poaching wherever Chinese labor camps were located and in fact set up specific interdiction efforts aimed to reduce poaching.”

Ranneberger added, “The [government of China] has not demonstrated any commitment to curb ivory poaching.”

The slaughter worries wildlife and conservation workers. “All the pointers are that poaching has grown very rapidly, very recently,” said Richard Leakey, a renowned Kenyan conservationist and former head of the national wildlife authority.

Global prices are now so high that fears are growing of a return to the collusion and corruption that allowed poaching to flourish in the 1970s and 1980s.

According to some estimates, ivory is selling for about $100 per kilogram at source in Africa and rhino horn for up to $6,000 per kilogram. By the time the contraband reaches Asia’s black markets, prices are perhaps 10 times higher. Such sums are a fortune to the criminal gangs who shoot the animals, often peppering them with machine gun fire.

TRAFFIC analyzes data on seizures of ivory for the global Elephant Trade Information System and notes correlations between corruption and the illegal ivory trade, something Interpol has also noted.

“The rewards are such that you inevitably run into corruption issues, it’s happening all the time,” said Peter Younger, wildlife crime program manager at Interpol.

Leakey accused the Kenyan wildlife service of complicity in the trade. “We’re right back where we were in the 1980s. I suspect that a lot of the killing that is being done in Kenya is either carried out by wildlife department personnel or with their full connivance,” he alleged. “It is very, very similar to the 1980s.”

Similar allegations have been leveled at authorities in South Africa, Tanzania, Zimbabwe and elsewhere.

Kipng’etcih denied any collusion by wildlife officials. “If you look at the seizures it is clear they are not coming from government stocks, because those are marked with indelible ink in accordance with regulations.”

Kipng'etcih added that the wildlife service has “counter-intelligence” measures to keep an eye on its own staff: “Any member of staff who was involved in poaching knows the consequences: They lose their job, they may go to jail.”