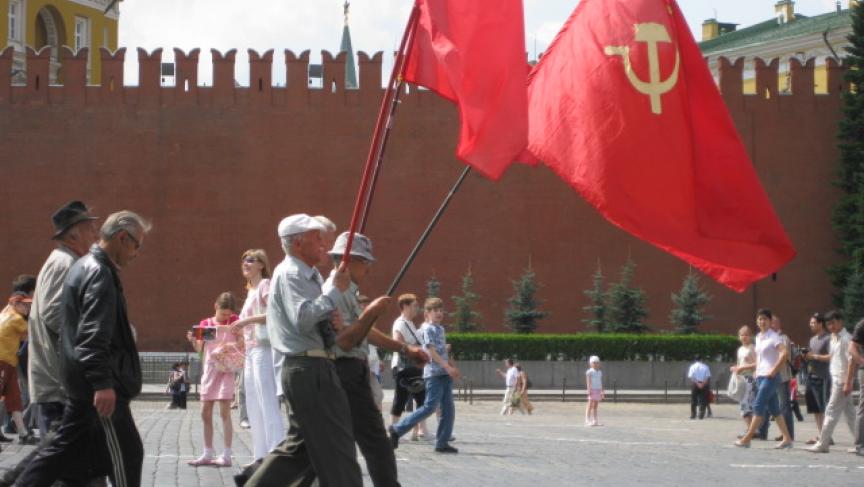 Share
By Jessica Golloher At a time when most of the former Soviet Union appears resigned to the fact that Russian voters will once again next year choose between two presidential candidates from The United Russia Party; a new era could be emerging. The United Russia Party — the party of President Dmitry Medvedev and Prime Minister Vladimir Putin — holds about 65 percent of the seats in the country's parliament. But the Communist Party believes it's time to go red or go home. Someone with ties to the party posted an action-packed video on YouTube. It mockingly shows the country's leaders, Medvedev and Putin, vying to be the country's next leader. [From video] PUTIN: I am president of the Russian Federation. MEDVEDEV: I am! PUTIN: I am! MEDVEDEV: I am! PUTIN: I'm not joking! "I didn't expect it," said Christopher Boian, chief of the foreign languages news department at RIA Novosti, a state-run news agency. "I thought it was pretty creative. An original piece of advertising from the Communist party. I didn't expect to see this. Boian is not the only person who was surprised by the video. It's gotten more than one million hits since it went viral on YouTube several days ago. "Very Hollywood!" said Victoria Hargrave, an advertising account manager at Edelman in Moscow. "It's fun it's engaging. I took me a few minutes to realize that it wasn't a trailer for a movie. I think that's what's most catchy. It doesn't come off immediately like a campaign ad or an advertisement. It's flashy, there's lights, there's bangs, there are explosions! That's what a really good advertisement does. It gets people talking about you. And talking about the video they are. Andrei Zolotov is editor in chief of the magazine "Russia Profile." "I would never vote for the communist," Zolotov said. "The communist party has a unique chance to attract creative people who want to come up with an opposition to United Russia." [From video] The battle for power for 2012 elections … there is always a choice But in the wake of this unexpected burst of communist creativity, will people actual choose the party next year? Not terribly likely, say most analysts? Translation of the Video ANCIENT RELIGIONS PREDICTED IT VO: Repent, the end is near IT IS INESCAPABLE VO: The world as we know it will soon come to an end Putin: The next presidential election in the Russian Federation in 2012… VO: I thought we would have more time… TWO CANDIDATES ONLY ONE CAN REMAIN Medvedev: Let me start by saying what I think about this as the President… Putin: I am President of the Russian Federation… Medvedev: I am… I am…I am… back and forth Putin: I'm not joking! TREACHERY Computer hacker: What's going on? Putin: We have created a very effective tandem with President Medvedev Medvedev: That's a lie! Computer hacker: But I'm concerned about something else. Putin: Mr Medvedev and I are people of a traditional orientation! Medvedev: That's a lie! Computer hacker: So that's how it is! THE PRE-ELECTION RACE VO: Is starting… Woman: It's on all the new channels![shots of Medvedev dancing and Putin singing "Blueberry Hill"] THERE WILL BE NO HOLDS BARRED MUDSLINGING THREATS Putin: (hard to make out what he says) HIGHER POWERS Where is the President, Sally? He's praying, Sir. In a situation like this, it's not such a bad idea… THE TIME HAS COME Danny! Look what's behind us! Oh my!… THE BATTLE FOR POWER Medvedev: Is he up in the air?… Beautiful! SOON VO: According to the first unconfirmed reports, large areas of the dessert are under water… VO: The whole world is going to be destroyed godammit! 2012 ELECTIONS VO: There is no choice www.kprf.ru THERE IS ALWAYS A CHOICE