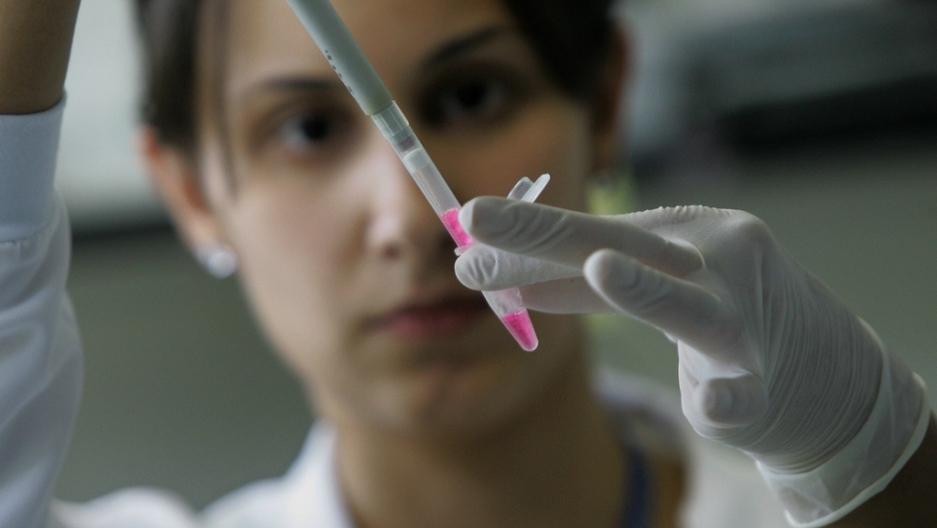 A scientific researcher extracts the RNA from embryonic stem cells in a laboratory in Sao Paulo.
Credit: Mauricio Lima
Share

RIO DE JANEIRO, Brazil — Wagner Seixas may be one of Brazil’s up-and-coming young scientists, but he nearly became a television repairman.

The cheerful, round-faced biochemist grew up in one of Rio de Janeiro’s more dangerous neighborhoods and had little chance of going to college. But just as he was finishing a TV and radio repair program, Seixas secured a rare spot in a pioneer program that trains low-income teenagers in science. It began with a course held during his school holidays.

“It was a real division in my life — before this course and after this course,” said Seixas, 34, in the university lab where he now heads a research group. “It gave me opportunities and changed my life.”

Seixas and researchers like him represent a remarkable boom that has transformed Brazil from science backwater to emerging powerhouse. Yet even as the number of researchers, laboratories and published papers have surged, some here worry the momentum won’t last.

After eight years of investing heavily in science, Brazil recently slashed the budget of the Ministry of Science and Technology by 23 percent. Meanwhile Brazil’s lackluster public schools are producing far too few students who can handle college-level science.

Brazilian scientists say their country stands at a crossroads.

“This is a really delicate moment,” Seixas said. “A cut of 23 percent for a budget that isn’t yet adequate could have serious consequences."

Seixas is one of a growing number of Brazilian postdoctoral students trained in the U.S. and Europe who chose to return to home. Seixas spent three years at Harvard Medical School, then turned down an invitation to stay on longer.

“I came back because I was attracted by the possibility of developing quality science here in Brazil,” Seixas said. “Right now I’m very motivated, but there’s no guarantee that I won’t end up frustrated in five or 10 years.”

Before the recent cuts, science funding had steadily increased along with Brazil’s growing economy under former President Luiz Inacio Lula da Silva. In 2001, before Lula took office, investment in science and technology from public and private sources was $10.6 billion. By 2009, investment reached $30 billion.

“We used to joke in the University of Sao Paulo that the best way to do science is to go to the airport. That has changed,” said Miguel Nicolelis, a Duke University neuroscientist who moved to the United States 23 years ago. “There are lots of people returning — people that went for post-docs and graduate school returning — and there are more senior people, like me, considering going back.”

Nicolelis splits his time between the United States and Brazil. He’s founded a neuroscience institute in the country’s poor northeast, and is working to attract industry to a research park next to the institute.

Nicolelis said the institute and research park make up the largest scientific inactive in Brazil, but it’s just one among a host of bold projects currently underway here. They range from a $700 million energy research center in Rio de Janeiro to an expedition to drill ice cores in Antarctica. It will be the country’s first research trip ever to the South Pole.

“It’s a sign that we have much more investment in science,” said Jefferson Simoes, the expedition leader.

Simoes himself represents yet another example of how things have changed. When he wanted to seek a doctorate in glaciology in the 1980s, his only option was to study in England. Now he heads an institute that trains glaciologists here.

Still, almost any researcher here can list a host of factors holding Brazilian science back.

Brazil’s notorious bureaucracy adds months onto efforts to import chemicals and vital equipment. Simoes estimates researchers spend a third of their time on paperwork. And while science investment has increased, it needs to keep on increasing to rival the amount spent on research and development in the U.S., Europe and even China.

“To reach that goal we must have an increase every year,” said Luiz Davidovich, a physicist who serves on the Brazilian Academy of Sciences board of directors. “And if you go back one year that means that we have to make a bigger effort in the next years.”

Doubling Brazil’s science investment to 2.5 percent of GDP is a key goal for the next decade, Davidovich said, adding that training more scientists poses an even bigger challenge. Only 16 percent of college-age Brazilians attend university, according to a recent United Nations study. By contrast, that figure is 40 percent in the United States.

In addition, while Brazil’s population is two-thirds that of the United States, it has just 10 percent as many researchers.

“We are not going to be competitive if our development is based on a fraction of our population,” Davidovich said. “We really have social apartheid here. Which means that children who come from richer families they have reasonably good schools. … While children from poor families go to public schools.”

The vast majority of public school students graduate ill-prepared to compete for limited spots in public universities. And they can’t afford tuition at private ones. Scientists here say efforts to remedy the inequality have so far fallen short.

The program that almost-TV repairman Wagner Seixas participated in is a good example. Most of its low-income participants have made it into college, partly because they received a fellowship to study for a college preparatory exam. But passing that test meant overcoming a lifetime of bad education.

“Things people learn over the course of three years, I had to learn in six months,” said Reinaldo Sousa dos Santos, a biochemistry Ph.D. student who participated in the program. “This was the most difficult thing.”

And Santos is exactly the kind of student Brazil needs to court. Like a quarter of Brazil’s population, he lives in an urban slum. His neighborhood is still under the control of drug gangs and he’s the first member of his family to attend university.

But Sousa dos Santos’ experience has only emphasized that he’s still very much the exception. He recently traveled to Brazil’s poor and underdeveloped north to teach a supplemental course for poor students in a rural village.

“You see kids who’ve never touched this sort of thing, and you see a resourcefulness and aptitude for proposing experiments, for seeing where things go wrong, for figuring out what to improve,” Sousa dos Santos said. “You say to yourself, ‘Wow, if only these kids had some opportunity.’”