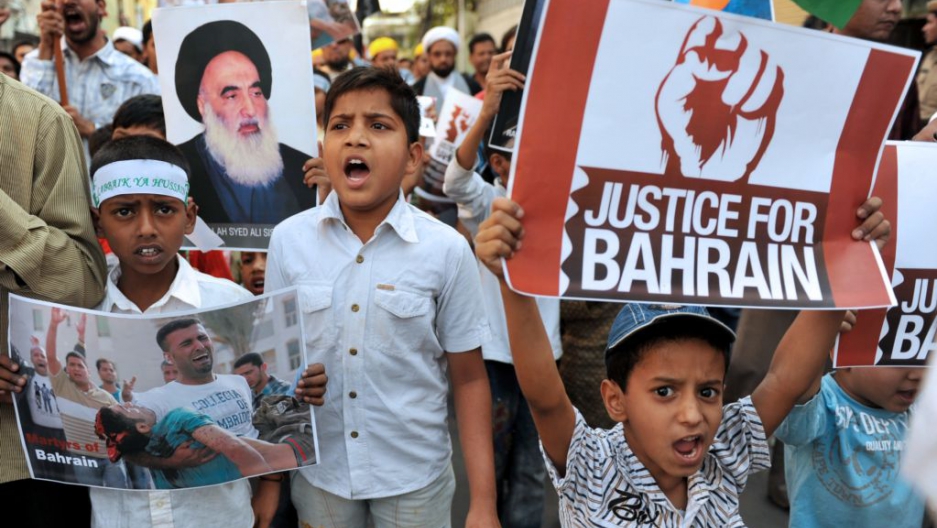 Young Indian Muslims pose with placards during a protest rally against the ongoing political turmoil in Bahrain on March 27, 2011.
Credit: Noah Seelam
Share

MANAMA, Bahrain — At first, she didn’t expect much from the demonstrations that began in mid-February. They drew only a few hundred people, and she had grown accustomed to her government ignoring its citizens.

“The government didn’t care about what the people say,” said the middle-aged woman.

But like similar movements in Egypt and Tunisia, the protest movement expanded beyond expectations. Its semi-permanent base camp at Manama’s Pearl Roundabout acquired a stage, big TV screens and tents for those staying overnight and for the 30-plus political factions and parties proselytizing to the crowds.

The woman, who has a writing career and is a mother, was taken in. Propelled by the feeling that her country was passing through a special time that “will not come again,” she became a regular visitor to the roundabout. The Arab world’s revolutionary fever had hit Bahrain and “showed us we can change ... as Barack Obama said, ‘Yes we can.’”

Today, that euphoria is gone and Bahrain’s protest movement is in tatters. Many of its leaders and activists are imprisoned and its followers, most of them Shiite, subject to harsh repression under emergency laws. Where Tunisia and Egypt saw change, Bahrain saw more of the same.

The woman who related her experience of those heady days initially agreed to be named in this story. But she said later she was too afraid to be identified, citing the continuing arrests of Shiites like herself.

Interviews with Bahraini political figures, human rights activists and journalists suggest that the movement’s failure was due to miscalculations on all sides. But most agree that its defeat was mainly due to the ascendance of hard-liners in both the government and the protest movement. A request to interview a government official was unsuccessful.

In the beginning, the protests were responding to a call by unidentified political activists on the newest revolutionary weapon: Facebook.

There was no visible leadership, although one of the first activists to show up was Abdul Wahab Hussein, head of Al Wafaa, a militant party that wants the royal family overthrown.

This demand, however, never became the protest movement’s majority opinion, which was for a constitutional monarchy, an end to corruption and to job discrimination against Shiites, a majority of Bahrain’s population.

Although most protesters were Shiite, Sunnis also joined them.

“What I liked was to have this space of freedom,” said one young Sunni who works as a driver. “It was the first time that people said ‘No,’ and our royal family is not used to hearing this and they got freaked out.”

On Feb. 17, the government raided Pearl Roundabout, forcibly dispersing the protesters and leaving four dead. Two days later, it reversed itself, and evacuated police from the site, allowing protesters to regroup there.

King Hamad bin Isa Al Khalifa apologized for the deaths on television and offered a dialogue. But the killings spurred many more Bahrainis, including the female writer, to join the protest movement.

But mindful of past, unmet promises from the royal family to enact genuine political reforms and perhaps increasingly confident as more Bahrainis joined the protests, the opposition set stiff conditions for dialogue.

According to A. Nabi Salman, deputy secretary general the Democratic and Progressive Al Minbar Society, an opposition group, those conditions included the release of more than 90 political prisoners, an investigation into protesters’ death, which by now was seven; an end to anti-Shiite incitement in the state-run press and the immediate resignation of Prime Minster Khalifa bin Salman Al Khalifa, widely seen as a security hard-liner within the royal family.

The opposition also wanted an elected Constituent Assembly to draft a new constitution.

At the same time, radical Shiite opposition parties were pursuing a more militant agenda, and stirring up crowds in Pearl Roundabout to reject a dialogue. On March 8, radical leader Hassan Mushaimaa, head of Al Haq, announced that he and Hussein’s party had opted for “bringing down the existing regime in Bahrain and establishing a democratic republican system,” as quoted in a report by Reuters.

This was a turning point because the government has long maintained that Al Haq has ties to Iran and though he did not say an “Islamic” republic, which is what Bahraini Sunnis believed he meant, according to a Bahraini university professor who declined to be named.

Though Mushaimaa only called for a republic once, said novelist Ramadan, “it was the once which killed us.”

More provocations from militant protesters followed, including a march by protesters to Riffa, where members of the royal family live, on March 11, and the erection of barricades on a highway cutting access to Manama’s financial district on March 13. A Bahraini journalist said Hussein, the militant activist who’d first appeared at the protests, organized the barricade.

“We have a big problem with radical Shias,” said the journalist, who is Shiite. “They give a bad image about Shias to the regime. They are always shouting.”
Another protester miscalculation, said Ramadan, was taking street action to Salmaniya Hospital, where the parking lot became a tent-filled annex to Pearl Roundabout. Some of its medical staff, who are predominantly Shiite, were outspoken in criticizing the government.

The Crown Prince was still trying, meanwhile, to get talks started. But he would not accept opposition demands for an elected constituent assembly and the immediate departure of the prime minister, who is his uncle. He did propose that the prime minister, who has been in his post 40 years, would step down later, in three months, according to A. Nabi Salman.

But the opposition still dithered, concerned that their radical Shiite brethren would make things difficult if they entered a dialogue without significant government concessions.

“We wanted to go as a unified opposition” but were “delayed by” Mushaimaa and other radicals, Salman said.

Meanwhile, state-run television and press, controlled by royal family hard-liners, also were not helping the Crown Prince. These media outlets did not support a dialogue and consistently featured militant Sunni community leaders who spoke demeaningly of Shiites, accusing them of being loyal to Iran and suggesting they leave the country.

Government officials also raised the specter of Iranian interference, accusing it of backing the protest movement, though there is little evidence of this, U.S. officials have said. Sunni leaders like Abdel Latif Mahmoud organized meetings at which they stoked Sunni fears about a Shiite take-over of the island.

“I attended one meeting,” said the woman writer who by now was growing increasingly nervous. “I heard how they filled people with this idea of how the Shiite are just for Iran and made them afraid.”

And so a new phenomenon began to appear in Bahrain: roaming gangs in civilian clothes, armed with guns or long sticks. Often masked, they were sometimes clad in military boots — which many Bahrainis took as proof that they were state security force members. These men began manning their own checkpoints and attacking Shiites. In one incident at the university, they pounced on a group of female students standing outside classrooms.

In the days just before the government began its crackdown on March 16, the Crown Prince and opposition were still trying to reach an accommodation. But hardliners in the government were pushing ahead with other plans.

On Monday March 14, around 1,200 Saudi troops entered Bahrain, followed by 500 United Arab Emirates policemen under a Gulf Cooperation Council mandate. On Tuesday, a state of emergency was called and the next day, Bahraini security forces began, as an official statement put it, “the cleansing” of Pearl Roundabout.
A severe crackdown on those who openly supported the protest movement continues. “I don’t feel safe now,” said the female protester, relating how three of her cousins have been detained.

“We don’t want to feel that everything is finished,” she sighed, her voice choking. “Those days I spent in the roundabout for the first time I felt like I breathed free,” and that “something new in Bahrain” was coming. But that is now in the past.

“I feel they killed the hope inside us.”