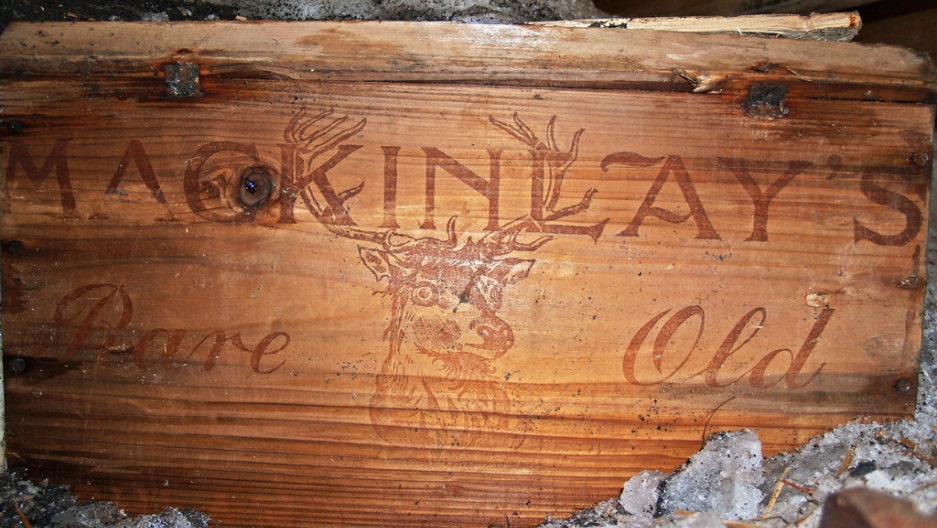 A crate of whisky discovered in the ice of Antarctica under the hut of explorer Ernest Shackleton.
Credit: Emily Stone
Share

CHICAGO — Few of us would want to relive Ernest Shackleton’s arduous and ultimately unsuccessful trek to the South Pole 103 years ago. But a Glasgow distillery is betting that a whole lot of people will want to sip the Scotch that Shackleton had with him on his Antarctic adventure.

Three crates of the explorer’s whisky spent a century forgotten and frozen to the rock underneath the hut he used as a staging ground for his attempt at the pole. Once they were discovered, it took another four years of strategizing before the crates could be safely removed, a sojourn in New Zealand where the bottles were thawed under precise laboratory conditions, a private jet ride back to Scotland, and eight weeks of exacting analysis, but the moment has arrived: Shackleton’s Antarctic whisky has been recreated and is ready for mere mortals to drink.

Whyte & Mackay, the company that now owns the distillery that made Shackleton’s spirit, announced this week that it had tasted the original blend, deemed it delicious and created “an exact replica.”

Fifty thousand bottles will go on sale in two to eight weeks, said Rob Bruce, the company’s head of global public relations. Sales will start in the United Kingdom, then roll out to key markets in Europe, the United States, Australia and New Zealand.

The bottles will cost £100 ($160), with 5 percent of each sale being donated to the New Zealand nonprofit responsible for conserving Shackleton’s hut.

“I hope I have done our forefathers and Ernest Shackleton proud with the replica,” Whyte & Mackay Master Blender Richard Paterson said in a statement. Paterson, who is known in the whisky world as “The Nose,” has been lobbying since the whisky’s discovery to get a sample and read its history, so to speak, by nosing and tasting it.

Paterson expected the whisky to have a heavy, peaty flavor, which was the fashion at the time. Instead, according to his tasting notes, he discovered a Scotch with “delicate aromas of crushed apple, pear and fresh pineapple. It has a whisper of marmalade, cinnamon and a tease of smoke, ginger and muscovado sugar.”

Bruce wouldn’t say much about the process Paterson used to create the replica.

“He used existing single malts, including liquid from the original Mackinlays distillery,” Bruce wrote in an email, referring to the company that made Shackleton’s stash. “We are not revealing any more than that at this stage.”

Whisky writer Dave Broom verified that the new spirit tastes exactly like the original, according to Whyte & Mackay’s statement. Paterson and Broom are the only two people in the world to have sipped both drinks.

The whisky crates, along with two of brandy, were discovered in 2006 by workers with Antarctic Heritage Trust who cleared out a century’s worth of ice that had accumulated under the hut during each year’s freeze-thaw cycle.

The hut sits on a spit of black volcanic rock called Cape Royds, and the wooden crates had frozen to the porous ground. It took four years for the conservators to return with the correct tools to gently remove the crates.

Nigel Watson, Antarctic Heritage Trust’s executive director, called the potential £250,000 ($400,000) in proceeds from the replica sales, “a very substantial and welcome donation.” The money will be used toward the group’s conservation work, which includes the upkeep of the hut used by Robert F. Scott on his fatal expedition to the South Pole.

When Shackleton (and Scott’s surviving crew) abandoned their huts to head north, they left behind much of their gear and provisions. The whisky was likely stored under the hut and either forgotten about or deemed unnecessary once the men were en route back to civilization.

Paterson’s tests revealed that the forsaken whisky has a 47.3 percent alcohol content, which is high. He believes this was to help prevent the liquid from freezing. The result, he said in his notes, is that it “gives plenty of impact, but in a mild and warming way. It has whispers of gentle bonfire smoke slowly giving way to spicy rich toffee, treacle and pecan nuts.”

No doubt just the things Shackleton and his men were longing for back home.