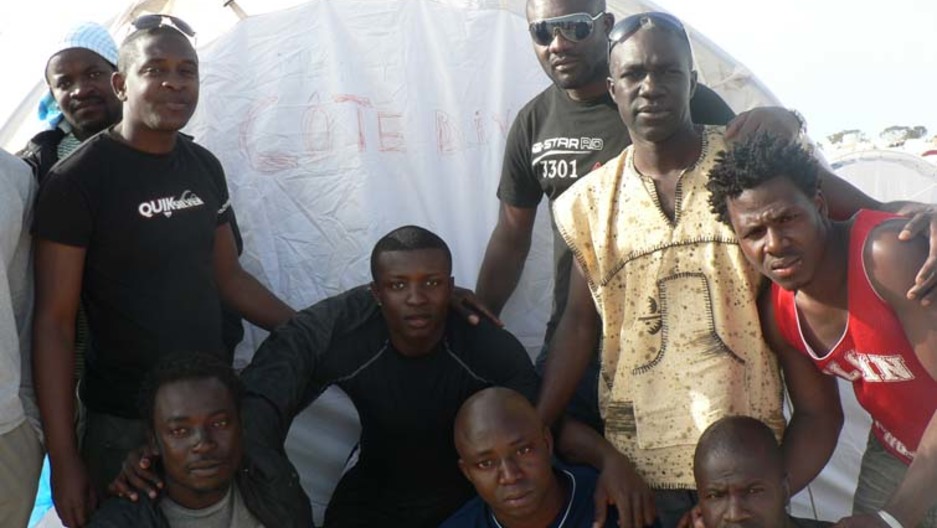 Share
By Marine Olivesi Over 400,000 people have fled the violence in Libya according to the International Organization for Migration. About half of the displaced population have sought shelter in Tunisia since the crisis began in late February. Most of them were foreign workers who've already been repatriated. But up to 12,000 migrants remain, according to the latest United Nations figures. They've either just arrived from Libya, or can't return home. Among the stranded, about 80 Ivoirians are stuck at Choucha camp, caught between two civil wars. The Red Cross phone tent is where they contact their families with the good news that they made it out of Libya safe and sound. But Ahmed Diakité looks somber as a volunteer dials the number he hands her. He isn't calling his family to say he's fine. He wants to check on them. Ahmed's sister and three brothers are stuck in their house in Ivory Coast's main city Abidjan. Violence has escalated there in the past few days as forces loyal to the internationally recognized president Alassane Ouattara close in on the stronghold of incumbent Laurent Gbagbo. Last time Ahmed called, his older brother told him they were running out of food. His brother also said he brought a gun home, just in case things turn ugly in their neighborhood. Ahmed said the thought of a gun in the house only makes him more worried. Ahmed gives his brother scant details about life at Choucha camp. He said nothing about how cold it is at night, how sand keeps blowing in his eyes, or about how he hates the sticky macaroni they keep serving here. He just tells his brother he's fine. Once he hangs up the phone, though, he lets out his anger about what's going on here and at home. "The crisis in Ivory Coast started before the crisis in Libya. The international community said Ouattara won the elections, so why didn't they step in right away?" he asked. "Instead, they hold a summit here, another summit there. In Libya, they intervened fast. Look at us now: We can't go to Ivory Coast, and we can't go back to Libya either!" Ahmed is one of 80 Ivorian refugees here caught between two wars raging in Africa. They want to get out of the camp, but they're afraid to be sent home too soon. Another Ivorian here named Mariko Paul is a long-time supporter of Ouattara. Mariko held a position of authority in Ouattara's party back in 2006. But he started receiving threats and decided to leave the country. He went to Libya where he worked in a clothing store. Mariko said even if Ouattara were to be invested with full presidential powers Wednesday, there would still be unrest. He believes Ivory Coast won't be any safer for him. Veronique M'tri agrees. She's the only woman in the group of Ivoirians here. She said France, Ivory Coast's former colonial power, should offer them asylum, at least for a few years. But UN refugee officials have said it would be easier to relocate them to one of Ivory Coast's neighbors in West Africa. For Veronique, that's out of question. She said there's no work there. "We're asked to go to Burkina Faso," M'tri said. "What are we gonna do there? Mali? It's no good either. In Senegal, they're protesting against their President. So where are we gonna go? Where?" One thing Ivoirians at Choucha camp do know: they might be stuck here for a while. UN officials told them on Friday it could take up to three months to get their asylum cases processed.