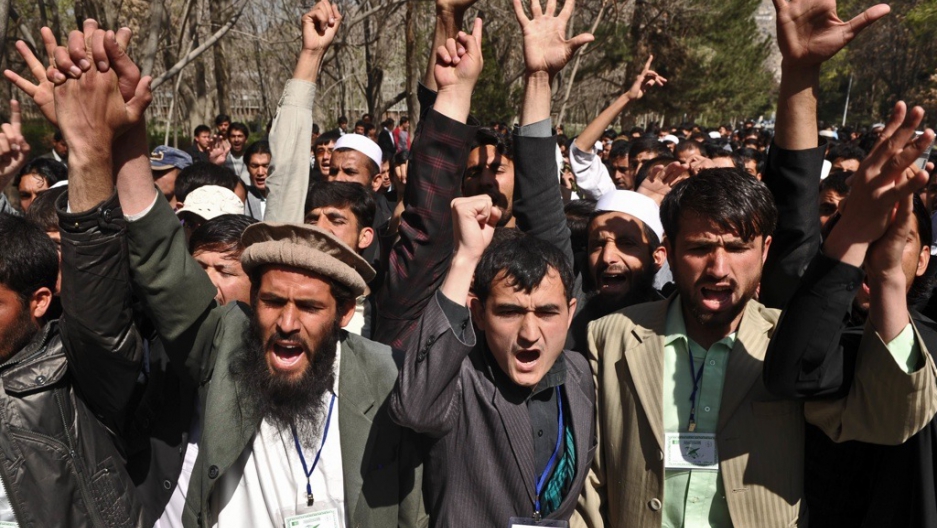 Afghan university students chant as they take part in a demonstration on April 5, 2011 against the earlier burning of a Quran by U.S. pastor Terry Jones.
Credit: Massoud Hossaini
Share

KABUL, Afghanistan — One of the stranger and more ironic by-products of the Florida Quran-burning incident has been the destruction by fire of many Qurans — several dozen, according to local estimates — in the violence and rage sweeping Kandahar.

One foreign observer, a long-time resident of Kandahar, said he had never heard so much gunfire in the city over such a prolonged period.

In two days of carnage, mobs have torched schools, shops, Internet cafes, many of which carry a copy of the Quran as a matter of course.

“Some crazy guy in Florida burns one Quran and here in Kandahar we burn hundreds,” said one disturbed Kandahar resident. “This is not the Islamic way.”

More than 20 people have now died in protests that have followed the “trial” and “execution” of Islam’s Holy Book in a small and poorly publicized ceremony in Florida on March 20.

Misguided religious fundamentalists are not unique to the United States, of course: the mullahs who whipped up the crowds in Mazar-e-Sharif last Friday are cast in the same mold. It is Afghanistan’s tragedy that circumstances allowed for the mindless riots that cost seven U.N. workers and five Afghans their lives. And it is Afghans, of course, who have paid the price in Kandahar and elsewhere.

“What sense does that make, killing ourselves to protest the act of some American?” grumbled one young Afghan.

But it is becoming more and more apparent that the outpouring of anger and frustration now gathering steam throughout Afghanistan has less to do with the actions of one crackpot preacher than with the sum total of U.S. performance in Afghanistan over the past 10 years. Afghans are angry, disappointed, and afraid.

Religion might serve as the vehicle for the violence, but it is not the underlying cause.

This is not to let Pastor Terry Jones and his Dove Outreach Center off the hook. Jones is certainly not going to be nominated for the Nobel Peace Prize any time soon.

Everyone from U.S. President Barack Obama to U.N. envoy Staffan de Mistura has condemned the pastor, using words such as “insane and despicable,” “intolerance,” and “bigotry.”

As a BBC interview with Jones last October revealed, he is also far from the brightest bulb in the chandelier. In the radio piece he appeared poorly informed, inconsistent, and often defensive when unable to parry the deft thrusts of master interviewer Owen Bennett-Jones.

Jones freely acknowledged that he had not read the Quran, since everything he needed to know about Islam he already had read in the Bible. The fact that the Bible predates Islam by more than a millennium did not seem to interfere with his reasoning at all.

There are many who wish there were a legal way to silence the man. Why, they ask, are Jones’ actions not akin to shouting “fire” in a crowded theater? Words that can reasonably be expected to cause a violent reaction and serve no useful purpose are not protected under the First Amendment.

But it will take more than Terry Jones and his mini-church to cause a massive upheaval in the U.S. Bill of Rights. Terry Jones is the sideshow in this mounting tragedy, Forrest Gumping his way into history.

President Hamid Karzai, of course, has milked the issue for all it is worth, and earned widespread condemnation for doing so.

Many have pointed out that it was Karzai himself who publicized the act, after the U.S. media wisely refused to give the Florida firebrand yet another 15 minutes of fame.

On March 24 Karzai issued a press release calling the act of burning the Quran “a crime against a religion and the entire Muslim umma (community).” He also called on the United States and the United Nations to bring the perpetrators to justice, something he knows very well is impossible under U.S. law.

His reaction to the violence in Mazar-e-Sharif was characteristic of this consummate politician. He asked for the U.S. Congress to condemn the Quran-burning, and has hinted that he would like to see Terry Jones put on trial.

He, of course, is being blatantly opportunistic, using a chance to shore up his shaky position at home by getting tough with his increasingly prickly ally, the United States.

But Karzai is just doing what politicians do. As the scorpion said to the tortoise, as they both drowned in the old tale of self-destructive betrayal, “It is my nature.”

Rather than blaming Terry Jones, the Mazar mullahs, Karzai himself, or “unseen hands” behind the rage, it is time to look at underlying causes.

Afghans are angry. I have just heard reports of renewed house raids in a village near Kabul. A province that is supposedly ready to be handed over to Afghan security forces is still being patrolled by U.S. Special Forces that enter and search houses at will.

Militias trained, paid for, and equipped with U.S. funds are once again plying their trade in the country — abusing the population. There’s that scorpion thing again.

Airstrikes kill innocent civilians, and then the U.S. military accuses Afghan parents of burning their own children to up the casualty count.

If counter-insurgency is still the order of the day, then something has gone terribly wrong. Protecting the local population and winning hearts and minds are the centerpieces of counter-insurgency strategies. But anti-American sentiment has never run higher in Afghanistan than right now.

For the present, the situation seems to be winding down. But it will not take much — perhaps Terry Jones again, with his threats to burn the Quran in Michigan or put the Prophet Mohammad on trial — to stir things up again.

It is going to be a long, hot summer, and the Taliban spring offensive could very well be the least of it.