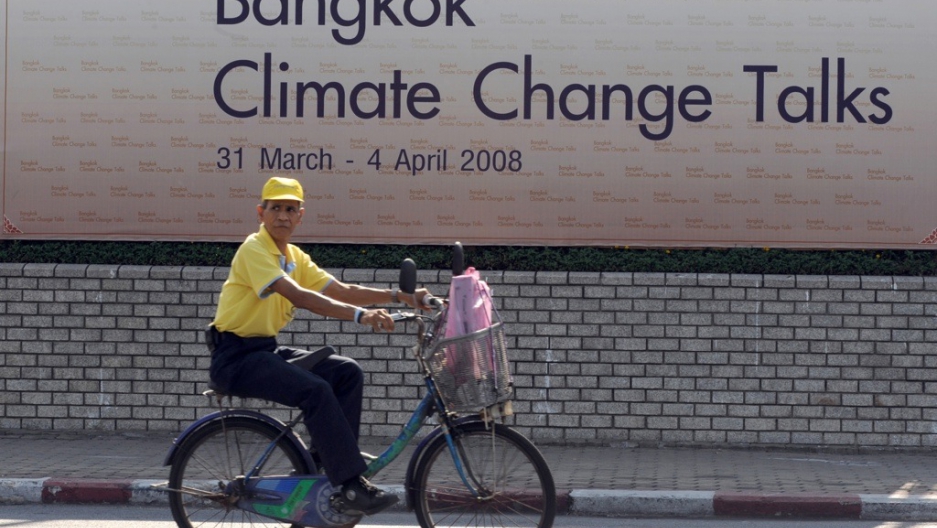 A man rides past by a banner in front of the United Nations building in Bangkok on March 30, 2008, on the eve of an earlier U.N. climate warming conference.
Credit: Saeed Khan
Share

BANGKOK, Thailand — Once again, the United Nations has assembled world governments to stop humanity from overheating the planet.

And once again, despite increasingly foreboding rhetoric, consensus on climate change appears elusive.

More than 170 delegates from nations rich, poor and in-between have gathered in Thailand’s capital to hammer out a plan to reverse global warming. Their stated goal: reducing carbon emissions so that the earth’s average temperature rises no more than 2 degrees Celsius (3.7 Fahrenheit) above pre-industrial temperatures.

While 2 degrees is still bad — a Sudanese delegate has called it “certain death” for Africa — it’s considered a realistic target that should spare many countries from huge crop losses and catastrophic floods.

But there is no overall plan to hit this 2-degree target. Even if every government met its goals to reduce emissions, the world would still climb to a destructive temperature, according to the United Nations.

“The sum of these national promises so far equals only 60 percent of what science says is required to have a medium chance of staying below the 2-degree goal,” said U.N. Climate Chief Christiana Figueres.

By Friday, delegates hope to work out a legally binding plan they can all sign by the year’s end, when they’ll regroup in South Africa. But there are three major setbacks they’ll need to resolve.

THE END OF KYOTO

Adopted in 1997, the Kyoto Protocol is proof that most of the world’s governments can agree to limit emissions. Of course, the treaty has its flaws. The United States never signed it for one, while another huge polluter, China, is largely exempted as a “developing country.”

Still, many are panicking as the world’s first and only sweeping climate change treaty nears expiration in 2012. Even Figueres, the U.N. climate chief, conceded that “a gap in this effort looks increasingly impossible to avoid.”

The current patchwork of nation-level promises put the planet on a course to 3- to 4-degrees of global warming above its pre-industrial state, said Tim Gore, senior climate change advisor for Oxfam, an international nongovernmental organization.

Environmentalists are urging delegates to agree on a “bigger and better” version of Kyoto that legally binds major polluters to their promises, Gore said. “But it would be complete madness,” he said, “to start again from scratch.”

Bangkok’s climate conference is playing out against a backdrop of environmental calamity in Japan, where authorities are still struggling to cool a nuclear plant damaged by tsunami waves.

(Read full coverage of the earthquake, tsunami and nuclear disaster that struck Japan on March 11.)

The crisis is expected to shake up many nations’ plans for more nuclear power plants, which produce steam and radioactive waste but not greenhouse gasses. Before the quake, Japan planned to build 14 more nuclear plants by 2030. China is pressing ahead with plans to build 28 more on top of the 12 already operating.

But nuclear plans in other fast-growing nations, such as disaster-prone Indonesia, may face blowback from environmentalists. Safety reviews are underway in the United States, United Kingdom, Germany and Spain. And environmental groups will likely redouble their battle against nuclear energy, particularly in light of the radioactive seawater now washing out from Japan’s coast.

“That is, in one word, outrageous,” said Naoyuki Yamagishi, climate change policy officer with World Wide Fund for Nature — Japan. “There’s no such thing as safe nuclear power plants.”

In December, at the U.N. climate change meeting in Mexico, delegates agreed to put up a staggering $100 billion to help poor countries cope with rising temperatures.

But they have not yet decided where the money will come from.

“It’s a bit like a nice, shiny hospital, with a queue of patients outside the door, but no doctors or nurses inside it,” Gore said.

This week, delegates hope to decide how to fill this fund. Previous meetings, namely the last Bangkok gathering in 2009, saw acrimony develop between poor and wealthy countries.

Less-developed nations insist they bear the brunt of rising temperatures, largely through crop losses and floods, even though they contribute the least environmental damage. Many want rich countries that pollute heavily, such as the United States, to offset their losses and pay for their transition to cleaner energy.

“The crisis facing the world is pressing and urgent,” Gore said. “And it’s hitting the poorest people who are the least responsible for it.”