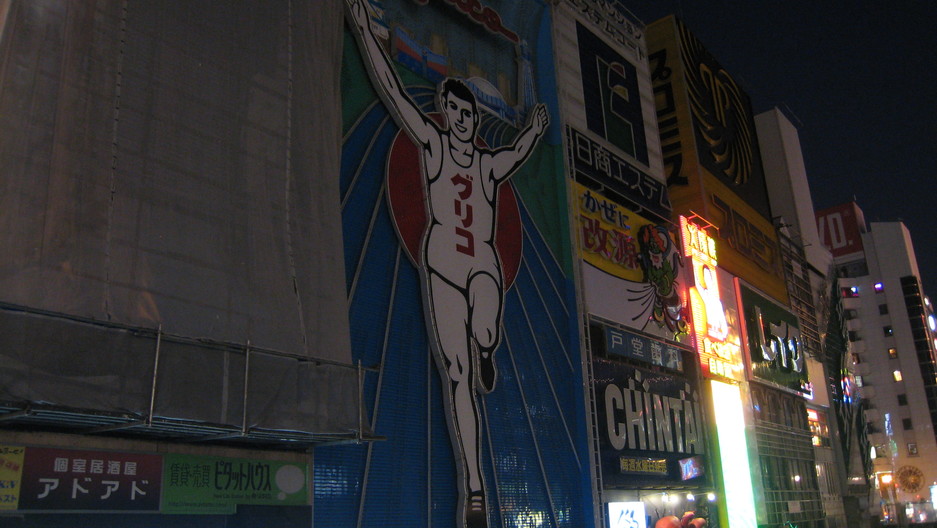 Share
By Sonia Narang Osaka, a bustling western Japanese city known for its bright lights and lively entertainment districts, has turned off some of its most famous light displays to exhibit self-restraint in a time of national grieving. In Osaka's Dotonbori area, office workers, young people and tourists gather on the famed Ebisu Bridge every night. Massive neon displays usually light up the night in this part of town, which is thought to have inspired scenes from the movie Blade Runner. These days, however, the atmosphere here is a lot more subdued. Osaka didn't face power outages like other parts of Japan, but the bright lights are off. Even Osaka's giant Glico Man billboard, a Japanese company's advertisement which shows a man running on a track, has gone dark. It's Osaka's equivalent of a flag being lowered to half-mast. Osaka resident Kotaro Kobayashi, who works for a local TV news station, said people in Osaka are trying to restrain themselves ever since the earthquake hit the eastern part of the country. "In the current climate, being loud and flashy is not appropriate," he said. The practice of self-restraint is known as "jishuku" in Japanese. It has become commonplace here in recent days. Many have expressed a desire to cut back consumption when so many of their countrymen in the tsunami-ravaged northeast are suffering. On a recent evening, Osaka's Ebisu bridge is packed with a group of volunteers collecting written messages of support for survivors. One of the volunteers, Takako Kamada, said this is a time of sadness for the entire country. "If there's something terribly wrong in our country, we want to show our grief, so we do things like cut down electricity to express our feelings of pain," she said. "If there are people who are sad in Japan, we want to have the same feelings that they are having." After the earthquake and tsunami, people in Osaka began reducing their power use, thinking they could send electricity to those facing shortages. Since the country's electric grid is split, the local electric company announced it could not send extra electricity to affected areas. But, many have continued to conserve. Hiro Atarashi organized the messages of support on Ebisu bridge. "Even though our lives are unaffected by the disaster, we also try to restrain our lifestyles," he said. "We try to think as much as possible what can we do for the people in the northeast." That urge to sacrifice is part of Japanese culture, said Kensuke Suzuki, an associate professor of sociology at Kwansei Gakuin University near Osaka. Suzuki said people who could not help tsunami victims reduced their own consumption as a way to cope with their frustration. He also described the Japanese concept of "gaman," which means to tolerate a painful situation. "The rationale for cutting back on electricity is connected to the Japanese idea of gaman," he said. "Japanese people willingly put themselves through hardships, because they believe if they tough it out now, things will get better for them in the future." Even Osaka's 24/7 convenience stores, known for their high-wattage neon signs have shut off exterior lights. Minoru Inayama, the owner of a Daily Yamazaki store in Osaka, said the company's headquarters told the individual stores to conserve electricity. "We can't just think we don't have to worry about what's happening elsewhere in Japan," he said. "I think we should help with whatever we can, even if it's a little bit." And no one wants to be criticized for acting like it's business as usual. Still, some say Osaka shouldn't come to a standstill. As college student Aya Yamada and her friend buy crepes from a kiosk near Dotonbori, she said she'd like to help in whatever way she can. But she thinks people here should carry on with their lives. "If we continue with our daily activities, it will encourage people in the affected areas to become more positive and show them that everything is going to be okay," she said. Kotaro Kobayashi said there may be a downside to all this restraint. "I understand the current mood, but if we don't resume normal activities, the economy could suffer," he said.