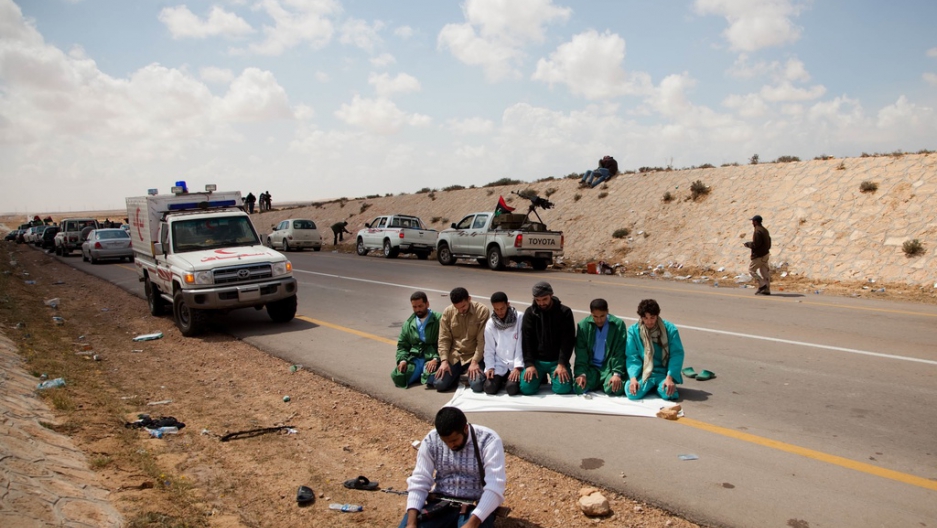 A medical team pauses from prayer on the front lines of the battle for Brega.
Credit: Nicole Tung
Share

BREGA, Libya — As the conflict in Libya increasingly looks like a stalemate between rebels and forces loyal to Libyan leader Muammar Gaddafi, a government envoy has traveled to Europe to discuss an end to the fighting.

Libyan Deputy Foreign Minister Abdelati Obeidi flew to Athens Sunday with a message from Gaddafi that he wants the conflict to end, Reuters reported. The Libyan government official met with Greek Prime Minister George Papandreou and is expected to then travel to Malta and Turkey.

"It seems that the Libyan authorities are seeking a solution," said Foreign Minister Dimitris Droutsas, according to Reuters.

Rebels and Gaddafi's forces have been fighting for control of Libya for more than a month. Despite air strikes and bombardments by coalition forces, the rebels have been unable to take and maintain the upper hand.

Gaddafi's forces now control the capital Tripoli and the west of Libya, while rebels maintain control over Benghazi in the east. The war is bogged down in the strategic oil town of Brega, about 500 miles east of Tripoli. The town has changed hands six times in as many weeks.

Rebel forces had reached the gates of Brega on Monday in an attempt to retake the city from Gaddafi's forces. The rebel military, in a sign of learning from past mistakes, said they will hold Brega before advancing again, according to General Ahmed Kitrani, a Benghazi brigade commander.

“We’re making a defensive line so not to lose it again,” Gen. Kitrani said.

The rebels have surrounded Brega in a crescent formation and pounded Gaddafi's forces with heavy Katusha rockets late in the evening on Monday.

In Benghazi, there’s a growing sense of dissatisfaction with air strikes since NATO took over, both because of a friendly-fire incident in which 13 rebel volunteers were killed this weekend, and a perception of slowing strikes as a prelude to a international community concession with Gaddafi or his sons. There were relatively small protests of the NATO strikes on Monday in Benghazi.

“From Tuesday there have been no air strikes, but they killed our rebels,” said Omar Mustafa, a father of six girls. “We don’t know why NATO is not working. We think there maybe a conspiracy for the oil moon of Ras Lanuf, Brega and Sedra.”

The New York Times reported that two of Gaddafi's sons have a plan to push their father out to make way for a constitutional democracy under the direction of his son, Seif al-Islam el-Gaddafi.

It was unclear if the proposal by the sons, Seif and Saadi el-Gaddafi, had the endorsement of their father.

"The proposal offers a new window into the dynamics of the Gaddafi family at a time when the colonel, who has seven sons, is relying heavily on them," it states. "Stripped of one of his closest confidantes by the defection of Foreign Minister Musa Kusa and isolated by decades of attempted coups and internal purges, he is leaning on his sons as trusted aides and military commanders."

A Turkish ferry called the Ankara arrived in Benghazi Sunday carrying hundreds of wounded people, many injured fighters, from the town of Misurata, which saw heavy fighting this weekend, the Washington Post reports. The ship picked up more wounded in Benghazi and will then travel on to Turkey.

Misurata is Libya's third-largest city and the last major hold out for opposition fighters who have been resisting bombardment and attacks from Gaddafi's troops for weeks.

Medical officials told the AP that government forces had killed 37 civilians over the past two days and that an attack had burned down the city's main stocks of flour and sugar.

“There’s no safe place in Misurata,” Faraj Ahmed, 31, a doctor on the ship, told the Washington Post. “There are bombs everywhere, in the homes, in the cars ... The situation is really bad. There is no food, no formula for babies.”