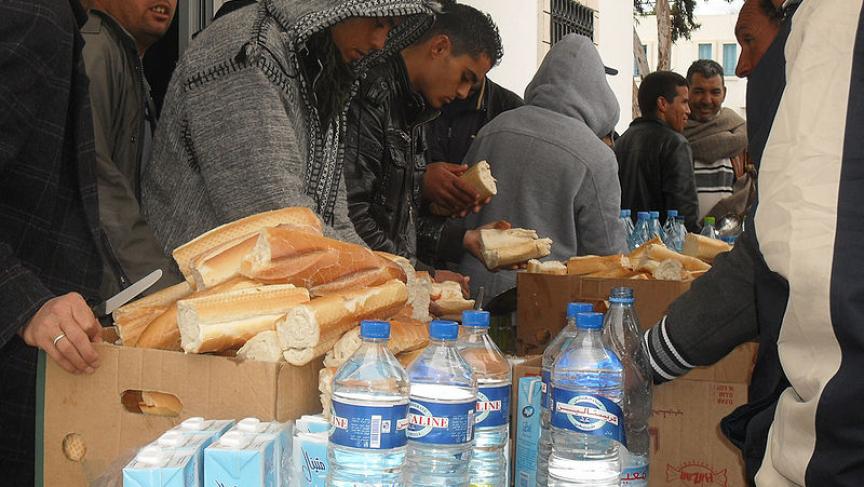 Authorities have begun moving thousands of refugees from North Africa off the Italian island of Lampedus to other parts of the country. Lampedusa is closer to Tunisia than to Italy itself and has been overwhelmed by people fleeing the uprisings. Italian officials say they’re dealing with a humanitarian crisis and worry they’ll run out of food and water. They’re also scolding the rest of Europe for not helping more.

More than 6,000 North African refugees have been huddling in camps on Lampedusa. That’s more than the native population of the island. Italy’s Health Ministry has called the situation a ticking time bomb, as both residents and refugees complain — sometimes loudly — about inadequate conditions.

Last week Italian authorities began evacuating thousands of refugees to other parts of Italy by boat. But rough seas put the operation on hold until Monday. Also hampering the effort, officials say, is the reticence of other Italian regions to take people in.

Cono Galipo heads Lampedusa’s immigrant holding center. He says fellow Italians might be more open to resettling refugees if other parts of Europe shared the burden too.

“I believe Europe as well as Italy has to make an effort to take the refugees from Lampedusa,” he said. “The effort has to be robust.”

But so far Italy’s neighbors have been slow to react. European Union officials in Brussels point that they have given several million dollars to help with the refugee crisis. But Italy wants EU countries to share the human burden.

So far none have offered to take in refugees. The highest profile European visitor to Lampedusa to date has been the far-right French politician Marine Le Pen. Le Pen wants the EU to help Italy, but not by accepting refugees. Rather, she said, Europe should seal its borders to stop immigrants from being smuggled north.

“Europe cannot handle any more clandestine immigration,” she said on a visit to the island’s immigrant holding center. “ We Europeans are impoverished enough and already have a lot of immigrants who come legally.”

Le Pen’s anti-immigrant message is finding larger audiences across Europe these days, with high unemployment still battering the continent. That partly explains why Italy’s neighbors have been quicker to commit fighter jets to defend civilians in Libya than to take in those fleeing the same conflict.

At an immigrant asylum office in Barcelona, Spain, for example, foreigners of mainly African origin line up to argue why they should be allowed to stay. Spain is Europe’s other gateway from Africa.

Local asylum attorney Jose Luis Numba said so far Spain has not received asylum seekers from the ongoing North African and Middle East revolutions, but he believes it will soon enough. He said Europe should embrace the refugees, while supporting democratic change in their home countries.

“These people are going to get their freedom at home,” he said. “So while we might see a big wave of immigration now it will only last for a short while. Once the situation stabilizes in North Africa we’ll see the flow of people come back into the balance we’re looking for.”