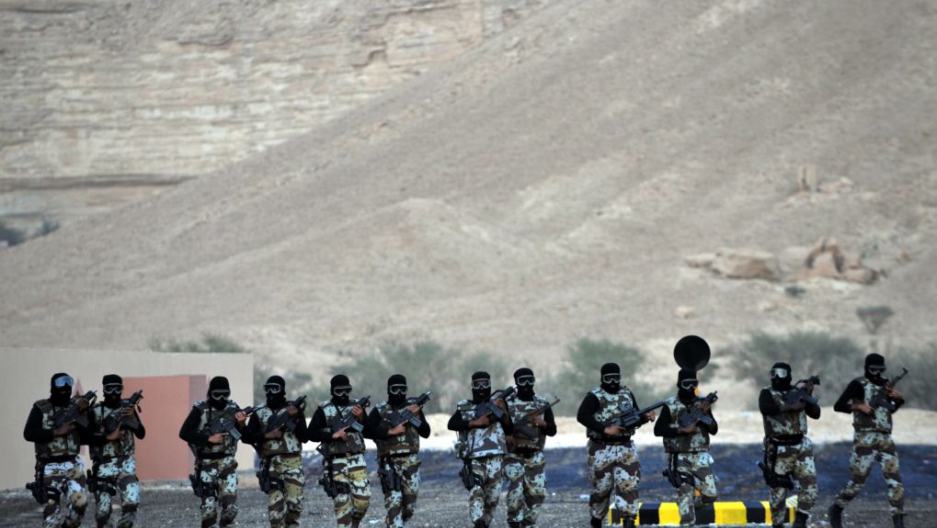 Saudi Arabia's special forces members of an anti-terror unit march during a display of their skills on March 22, 2011.
Credit: Fayed Nureldine
Share

RIYADH, Saudi Arabia – In its first comprehensive accounting of detainees arrested in connection with its eight-year campaign against Al Qaeda, the Saudi government has disclosed that more than half of the 11,527 persons detained for alleged terrorist-related activities – 5,831 – have been released after serving sentences for minor, non-violent crimes.

Of the 5,696 still held, 1,612 are serving prison sentences following their convictions, the Ministry of Interior announced Saturday. Another 603 are being tried in on-going proceedings; 934 are awaiting the start of their trials; and 616 are still being investigated, the ministry said.

In relation to 1,931 other detainees, the authorities have completed their investigations and the results are being forwarded to prosecutors for a decision on whether to take the case to trial or not, the ministry stated.

It is perhaps no coincidence that the release of this once tightly held information comes on the heels of several small demonstrations outside the Interior Ministry in Riyadh in recent weeks during which male and female relatives of detainees protested that their family members were being held for years without trials or charges.

On another occasion, around 200 angry relatives of detained persons spent a day inside the ministry demanding to see the Interior Minister Prince Nayef bin Abdul Aziz, according to a relative who was there to seek information on his brother.

The government had also come under fire from human rights groups for not releasing information about long-held detainees.

“It’s very important to think about the situation of these families,” said religiously conservative writer Mohammad Al Hodaif, who has three male relatives that have been detained for long periods without charges. “This case has been going on for many years and this file has to be closed.”

Interior Ministry spokesman Gen. Mansour Al Turki said the information was released in order to give an accurate accounting of the number of people detained and to demonstrate that “not everyone who is arrested will stay forever [in prison]. We have released more than fifty percent.”

Al Turki said that of the 5,831 released none were “found to be involved in any criminal activity which resulted in a death or injury to anyone ...They made a mistake, but the mistake did not require them to go for a long period in prison … some were sentenced to months, some to years.”

He added that they were prosecuted before the special court in Riyadh that handles terrorist-related crimes was established.

Asked if none of the 11,527 arrested since 2003 in the government’s battle against Al Qaeda were found innocent, or wrongly detained, Al Turki said that the 11,527 total did not include those arrested but released within days after authorities determined they were wrongly detained.

In May 2003, Al Qaeda launched a violent campaign to destabilize the kingdom, targeting residential compounds, Saudi policemen, foreign embassies and vital installations. The last major attack was in February 2006, when extremists attempted to attack the world's largest oil processing facility at Abqaiq.

In 2008, Interior Minister Prince Nayef, who also serves as second deputy prime minister, disclosed that Al Qaeda militants had executed more than 30 attacks, killing 164 people, including 74 security officials, and injuring 657 police and 439 civilians. He added that more than 160 other “terrorist operations” had been foiled.

Although Prince Nayef had promised that all detainees would be brought to trial, information has been extremely scarce about the number of people prosecuted, what they were found guilty of, and the length of their sentences.

In July 2009, the government disclosed that up until then, 330 people had been tried on terrorist charges with seven acquitted. Of the 323 convicted, who included 41 non-Saudis, 13 were sentenced to prison terms of more than 20 years. One was given the death sentence. These 2009 figures are included in the statistics released Saturday, Al Turki said.

Trials are held in Riyadh in a special court for terrorism charges. Human rights organizations and some local lawyers have criticized the proceedings for being closed to the public and for not giving defendants a fair trial. Family members have told human rights groups that defendants did not have their own lawyers.

The Interior Ministry also said Saturday that it has spent 32 million riyals to compensate 486 detainees for having been jailed longer than their allotted sentences.
Al Turki acknowledged that some detainees with completed sentences are still held being. He said that a committee headed by a judge had determined that they are still “dangerous” to society. He did not know how many are in that situation.

The spokesman also said that the ministry has spent 529 million riyals on stipends to families of detainees, whether they are convicted or not. This financial support is necessary, he said, because “if we leave them, they will be lost ... and somebody might take advantage of that and might recruit their kid.”

Apparently aiming to counter claims by relatives that detainees are held incommunicado, the ministry said Saturday that in the past four years, more than 858,000 relatives and friends had visited detainees in prisons.

Editor's note: This story was updated to reflect the Saudi government's announcement that the 5,831 prisoners released had served sentences for minor, non-violent crimes. They were not, as originally reported, released because they were innocent.