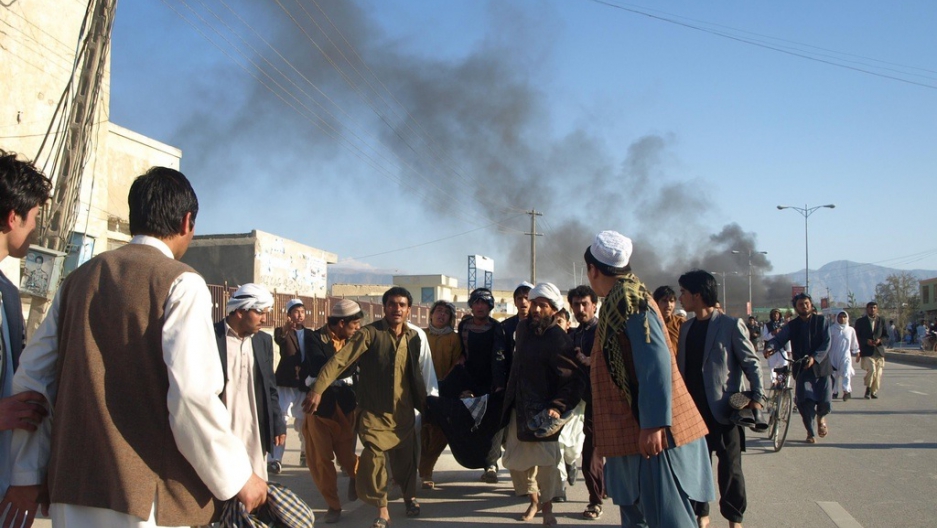 Smoke billows from the U.N. compound as Afghans carry a man wounded by security guards when protesters attacked the U.N. headquarters in Mazar-i-Sharif on April 1, 2011.
Credit: STR
Share

KABUL, Afghanistan — At least seven foreign United Nations workers were killed Friday, two of them reportedly beheaded, in an attack on a U.N. compound in Afghanistan by demonstrators protesting the burning of a Quran by a U.S. pastor.

Five Afghans also reported to be among the dead in Afghanistan's northern city of Mazar-e-Sharif.

The protests were incited by the burning of a Quran in a small Florida church two weeks ago. Evangelical pastor Wayne Sapp help a "trial" for the Muslim holy book, and after the book was found guilty, he set it on fire, the AFP reported.

In Mazar-e-Sharif — the site of the attack on the U.N. compound — a crowd numbering in the thousands was was stirred into frenzy by a small number of mullahs who cited the incident in Florida.

The sermon, delivered to those attending Friday prayers at the city's iconic Blue Mosque, urged for protests calling for punishment of those responsible in the desecration of Islam's most sacred text.

Reports indicate that the mob, chorusing anti-American phrases, overran the Nepali security personnel guarding the compound before ransacking the offices and killing a number of people inside. Initial accounts from those on the scene indicated that two of the bodies had been beheaded, though this was subsequently denied by an Afghan police spokesperson.

A U.N. spokesman Dan McNorton said that details remained unclear, but that the top U.N. representative in Afghanistan, Staffan De Mistura, was traveling to the area to handle the matter, CNN reported.

The attacks, occurring on the traditional day of rest and prayer for many Afghans, are particularly troubling due to the perception of Mazar e-Sharif as one of the country's most stable and peaceful cities. Many foreign organizations with offices around the country remain on total security lock-down.

The incident indicates just how volatile the situation in Afghanistan appears to be. Widespread frustration at the longterm foreign presence continues to sporadically combust into violent confrontations like the one seen today.

Thousands of demonstrators also reportedly marched through western city of Herat and abound 200 through Kabul, but there was no violence at either protest.

Under U.N. rules, officials will have to consider pulling out staff members or shutting down operations all together, according to the Guardian. After an attack on a U.N. guesthouse in 2009 that killed five staff members, hundreds of workers were temporarily relocated to Dubai.

— Freya Petersen contributed to this story.