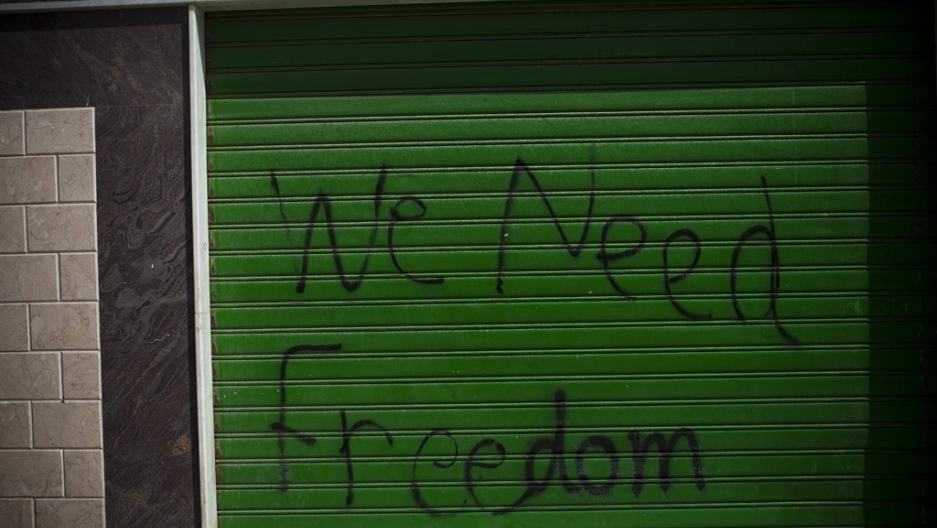 "We need freedom" is written across the green storefronts that pepper the city. From his green book to the national flag, green was the signature color of Gaddafi's regime.
Credit: Nichole Sobecki
Share

BENGHAZI, Libya — Off of a battered street, up a trash-strewn stairwell and inside a nicely-furnished apartment with a flat screen television turned to cable news, sat Ahmed Ali, 56, with his wife, two boys and three daughters.

They are one of the few families who stayed here in Benghazi through the "bad times," participating in the revolution through the internet and peaceful marches rather than on the front lines.

Their choice to stay in this heartland of the rebellion meant suffering through a prolonged siege by forces loyal to Libyan leader Muammar Gaddafi, having to watch their every move and from their balcony, witnessing the brutality of the leader’s secret security forces.

Ali, an oil turbine mechanic, watched as the revolution began, his daughters videotaping the first rock throwers and the police vans that tried to run them down.

Two weeks ago they labored over whether to stay or flee as Gaddafi’s network of secret police and informers entrenched themselves in buildings all over Benghazi, and a column of loyalist tanks rolled in from the outskirts.

The family was horrified as they witnessed rooftop snipers gun down peaceful protesters.

These days, with Gaddafi’s forces pushed back by a disorganized rebel army and a barrage of international air strikes, the family is now besieged by a whole new, but not unfamiliar, threat — a barely functioning economy.

“When Gaddafi hit Gaminis, 50 kilometers outside Benghazi,” Ali said, “lots of people left for the East. My wife was crying the blues. She was worried the soldiers would rape my daughters in front of us.”

“I live in a big apartment building and only five families stayed,” he added. “We were roosters, the rest were chickens. Even one of the [former] colonels left with his family.”

But with most shops closed and little work to speak of, Ali now struggles to meet even his family’s basic needs.

“All of the oil fields have been shut down,” he said. “I was supposed to return to work on Feb. 27. I haven’t been paid in two months. I have 11 dinars in my bank account.”

Rafa Lobi, 31, waiting in a crowd outside a Benghazi internet cafe to contact a brother in Tripoli, echoed Ali’s complaints. Lobi is an accountant for an international oil company, and their operations too were shuttered when the revolution began.

“It takes a long time to save,” he said.

Ali’s son Mohammed, 22, who has a university degree, is now driving a cab to make money. His other son, Islam, 20, had been training to become a medic when the revolt began. He is now volunteering on the war’s front lines.

Until things improve, many Libyan men in Benghazi are relying on short-term loans.

“My brother is a bank manager,” Ali said. “He told us the priorities for money are first the families of the dead, then for those on the front, and those with captured relatives. I can borrow maybe 200 more. After that I can borrow 100 from each of my brothers. But that’s it.”

For many of the city’s youngest residents, concerns of money and economic survival are fleeting, especially when compared to the far-reaching goals of the revolution, which most have embraced wholeheartedly.

When Gaddafi reached out to protesters in an apparent effort to end the revolt several weeks ago, it was too late for most of the city’s youth. To Ali’s surprise, even his 18-year-old daughter had joined calls for the leaders removal.

The girls, he said, were typically less prone to revolution because their families supported them financially. The boys, on the other hand, were often left to fend for themselves, and had become increasingly frustrated by the lack of economic opportunities.

“When the revolution began, at first I was with Gaddafi,” Ali’s daughter, Hanen, said. “When I saw what Gaddafi was doing to my brothers in the street, however, we went with the revolution.”

“I didn’t tell her to change her mind,” her father replied proudly.

Hanen, like many of the youngest voices of the revolution, has the exuberance of teenager in the middle of something big. She, like many of her friends, has tracked the protests from the start through Facebook.

The tension had been simmering in Benghazi for years, fueled by decades of repression. But the storm exploded when Gaddafi’s troops turned their guns against the protesters.

“It was the first time I see blood in my life,” Hanen said.

The city of Benghazi is no stranger to Gaddafi’s brutality and, in fact, had often been the target of it.

More than two years ago, a small group of families here began to take to the streets in an effort to seek the truth about a 1996 massacre of more than 1,200 inmates at the Abu Salim prison in Tripoli, Libya’s capital. Notorious for torture, Abu Salim is run by the country’s internal security agency and is home to most of the country's political prisoners.

When, on Feb. 15, police arrested Fathi Terbil, a lawyer that had been documenting the Abu Salim violence, hundreds more were inspired to join the families of the victims in protest.

Hanen showed us a home video of protesters chanting, “Call Al Jazeera, Gaddafi is sending arms to kill us!”

Eptisam, 25, who’s covered more traditionally than her younger sister, said she filmed most of the protests from their balcony before a sniper bullet came through the window, piercing both curtains.

She said she supported the revolution because she wanted the freedom to pursue her dreams.

“I graduated in 2004, and all I’ve done is cook in the house,” Eptisam said. “I’d like to cook in another city, to specialize in a restaurant.”

Hanen insisted she wouldn’t return to her studies at the nearby dental school until the curriculum was overhauled.

“In the university we don’t have real subjects. We study the Green Book for a grade,” she said, referring to the ideological handbook written by Gaddafi. “Now I have a special feeling: We can say ‘no.’”

Since leaving school, Hanen said she has volunteered to help organize medical supplies being sent from Egypt and Qatar for various hospitals around the city and for fighters on the front lines.

The girls admitted they were afraid the night and following morning that Gaddafi forces neared Benghazi. But they were glad that they refused to leave.

“We will change the money because of Gaddafi’s face,” Eptisam said.