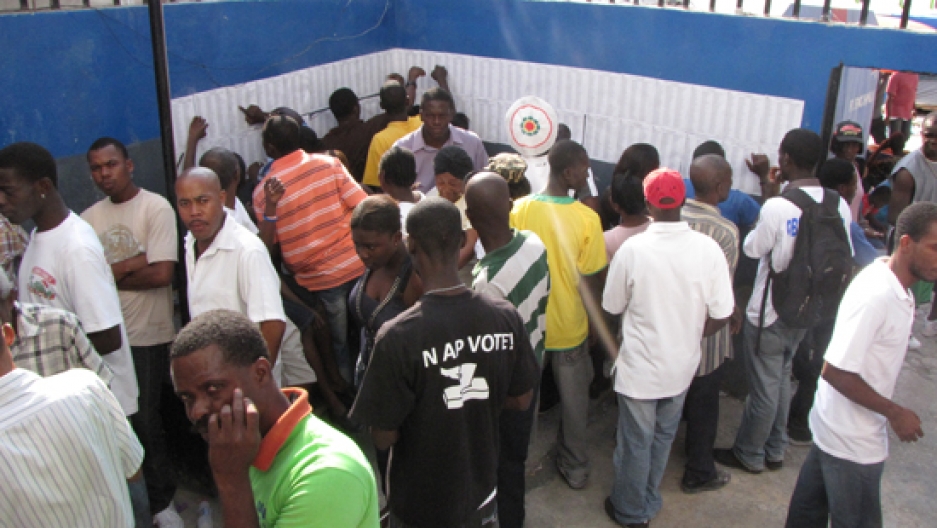 Share
By Amy Bracken Haiti has waited a long time for the results of their presidential election. And people there will have to a little longer. Preliminary results from this month's runoff were due Wednesday, but election officials postponed them until next week citing "fraud and irregularities." Irregularities in the first round provoked violent protests in 2010. It's down to two candidates now. The two candidates, Mirlande Manigat and Michel Martelly, could not be more different. Manigat is a 70-year-old professor of constitutional law and former first lady. Martelly is a 50-year-old pop star whose raw lyrics would be banned from US airwaves. Both candidates have passionate supporters. Martelly's fans have been especially lively at concerts organized by his campaign. His hot pink billboards, posters and T-shirts can be seen all over town. Even at banks and formal restaurants, employees sport the bright pink Martelly rubber bracelet. Martelly's campaign mascot is a bull, and he has a forceful presence, as in the televised debate. For many, that's part of the appeal. "Martelly is not going to be a man who's going to be a soft man in power. He's going to be a very strong man," said Philippe Armand, a prominent Haitian businessman. He says Martelly would be a welcome change from the current President René Preval. "The most important thing today is to restore the authority of the state," Admand said. "Martelly says he's going to tackle corruption. We're one of the most corrupt countries in the world, so if he does that in a dictatorial way, why not? If you don't do that, the country cannot move forward." Back in December, Martelly's supporters took to the streets to protest election results that would have kept Martelly out of the runoff. After a week of sometimes violent demonstrations, there was a partial recount. That put Martelly back in the running. There could be trouble Pras Michel, a member of the Fugees and a friend of Michel Martelly's, says if Martelly doesn't win, there could be trouble. "The people focused, they want Michel, and nothing's gonna distract them," Michel said. "If the results are not what they want them to be, then you're probably gonna have some issues." That worries Jean-Junior Joseph, a supporter of the opposing candidate, Mirlande Manigat. Joseph says Martelly is a populist. "Mr. Martelly get to the second round based on the streets," Joseph said. "Not based on the tally sheets. And everybody knows that. It's like a movement, a populist movement, which is very dangerous." Politically, the two candidates aren't that far apart. Both are considered right of center. Both identify education and rebuilding post-earthquake as top priorities. But Manigat takes a more measured approach. She's seen as the establishment candidate, even though she was only first lady for five months, before her husband was ousted in a military coup in 1988. And where Martelly yells during a debate, Manigat speaks in a quiet, deliberate way. Jean-Jacques Augustin, a photographer for the newspaper Le Matin, followed her on the campaign trail. Like a mother "She was always very calm … it's like a mom who teaches her kids," Augustin said. "Everywhere we went, people declared, 'Ba m Maman m' ('Give me my mom'), and she presents herself as a mom. In my opinion, Haiti deserves a leader like her." But Martelly and his followers are not her only adversaries in this race. There's also public weariness. Voter turnout was estimated at a little more than 30 percent. Manigat herself points out that many simply didn't see the point. "What is the reward of the democratic fight of the Haitian population so far?" Manigat said. "What are the results for him? He still lives in the slums, his children do not go to school. His wife can die due to lack of medicine … democracy does not mean concrete realizations to him. For the very large part of the population in Haiti, democracy doesn't mean anything." That was true for 38-year-old Vanissia Delisca. She lost her home and business in the earthquake. On Election Day, Delisca sat outside her makeshift shack in a tent camp. "I'm not going to vote," Delisca said. "Because I voted in the past, and I didn't see any change. And from time to time you hear it's a disaster; vagabonds are throwing rocks and spoiling the elections. I'm discouraged." Delisca wasn't the only one in her camp who didn't vote. Others said they couldn't walk the long distance to the polls. Much more accessible was a nearby church tent. Camp residents poured in, some to pray for a leader who could bring change to their country.