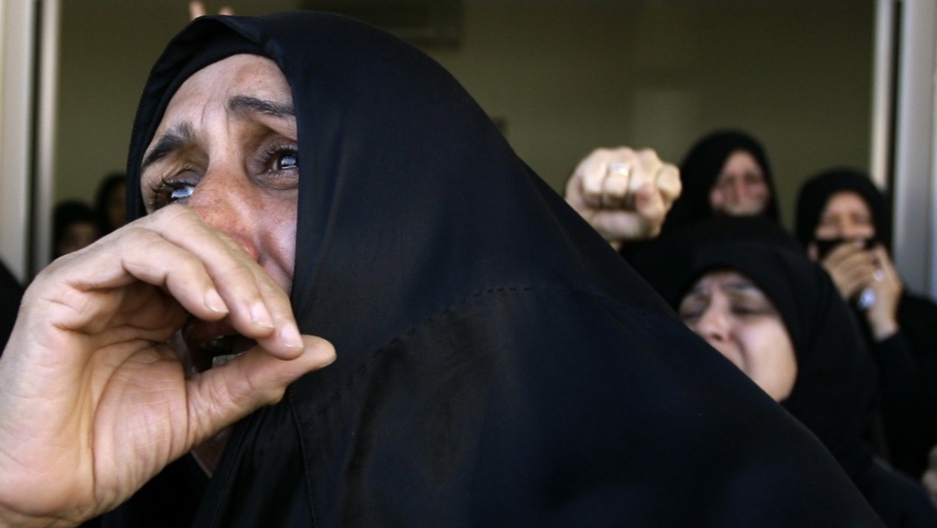 MANAMA, Bahrain — It was late Friday afternoon. The deserted roads of this capital city were blanketed with soldiers, faces masked, seated atop armored personnel carriers. Checkpoints secured access roads to outlying Shiite villages, where squads of police were out in force to foil any protest that might erupt.

My taxi driver stopped at one checkpoint. Three riot policemen in blue uniforms bent down to look in the car.

“Where are you going?” one asked.

“I’m bringing her back to her hotel,” my driver said.

The next question — “Where are you coming from?” — carried this tagline: “Shit on you and your face.”

The driver kept his cool, replying: “Before you say that, you should look at my identity card — by the way, I’m Sunni.”

“I’m sorry,” he said, embarrassed by his mistake in assuming my driver was Shiite just because we were in a Shiite area.

The incident underscores the deep trauma afflicting this Gulf kingdom, whose citizens say they once reveled in the comforting intimacy that infuses life on a tiny island.

No more. Bahrain today is a fearful abode of sectarian division, fueled largely by the Sunni-led government’s violent suppression of a once euphoric protest movement, and a campaign of Shiite intimidation that is both pitiless and petty.

The “situation” has included nighttime arrests of political opposition leaders, protest movement activists, human rights monitors, and even artists who supported the reformist movement. Shiites stopped at checkpoints, sometimes run by masked men in civilian clothes, are often insulted, and then robbed of their money and mobile phones, Al Mosawi said.

The home of opposition figure Munira Fakhro was firebombed twice; the offices of her party, al Wa’ad, were burned down, and the presses of the opposition Al Wasat newspaper were vandalized. Scores of people are missing, according to Al Wefaq, the political party.

A journalist, who asked not to be named because he feared retaliation, noted that official statements used the word “cleansing” to describe the security forces’ routing on March 16 of the protesters camped in Pearl Roundabout, a traffic rotary that served as the movement’s main staging ground.

“It’s right to add ‘ethnic,’” the journalist added, saying that he believed the aim of the two-week-old campaign “is to instill fear and horror in the Shiite community and make everyone succumb to the authorities.”

Human Rights Watch reported Tuesday that 11 people have been killed since the crackdown began, most of them “by security forces using excessive force, namely crowd-control equipment at extremely close range and live gunfire.” Four members of the government security forces were also killed. Prior to the crackdown, seven protesters had been killed.

Inspired by protest movements in Tunisia and Egypt, Bahrainis launched their own on Feb. 14, and it swelled beyond expectations. The demands were political reform, with most calling for a constitutional monarchy and an end to corruption. Protesters were mostly Shiite — 60 percent of the island’s population is Shiite — and they were demanding a fairer distribution of jobs as well as an end to their political marginalization.

The government of King Hamad bin Isa Al Khalifa, now dominated by a hardline faction within the royal family, declared “a state of National Safety,” or emergency law, on March 15 and raided Pearl Roundabout the next day.

Violent clashes followed over several days as security forces also took over Salmaniya Hospital, whose parking lot had become another base for protesters, and sought to subdue Shiite villages where residents had erected checkpoints to keep police out.

The government said it was acting to restore stability and security and indeed, some actions by protesters appeared to be deliberately provocative. For instance, on March 13, a few hundred youths, working at dawn’s light, set up barricades to block the main highway into Manama’s financial district. According to another Bahraini journalist, this move was organized by hardline opposition figures that had called for the abdication of the royal family — a minority but vocal faction in the protest movement.

The leader of Al Wefaq, the largest Shiite political party, called for outside mediators to break the tension-filled impasse between the Sunni government and the Shiite population, which is not only ripping apart Bahrain but inciting sectarian sentiments around the Middle East as Sunnis and Shiites elsewhere watch events here.

“There is very deep distrust between the government and the people and we prefer that some third parties come to help for this dialogue,” Sheikh Ali Salman said in an interview Saturday at his party’s headquarters.

It was reported the next day that Al Wefaq had accepted a mediation offer by a Kuwaiti delegation. But the government is in no mood for dialogue with the opposition, which Foreign Affairs Minister Shaikh Khalid bin Ahmed bin Mohammed Al Khalifa made clear a few hours later in a tweet: “Any talk about any Kuwaiti mediation in Bahrain is not correct at all …”

Interviews with human rights activists, Shiite politicians, journalists and others over several days elicited numerous examples of how the government appears to be aiming to demoralize those who participated in or sympathized with the month-long protest movement.

It is not just Shia being targeted. The Sunni leader of Wa’ad Party, Ibrahim Sharif, who supported the protest movement, was also detained. Fellow Wa’ad party member Fakhro said she believes he was arrested “because the government doesn’t want a Sunni voice aligned with the Shia voices, because this has to be sectarian.”

State-run Bahrain television and the leading government paper, Al Watan, which are both controlled by government hardliners, are seeking to rally the Sunni population by stoking anti-Shiite feelings, Bahrainis said. Both media outfits regularly feature Sunni extremists who speak of Shiites in demeaning ways, accusing them of being disloyal, partial to Iran and suggesting they leave the country.

In a move likely to increase tensions, the military prosecutor on Monday banned the publishing of any news about investigations done by his office relating to the emergency laws in place.

Those investigations may cover injured protesters taken against their will from Salmaniya Hospital to a military hospital. A government spokeswoman last week said that 12 transferred patients “are subject to a criminal investigation.” Another 10 also under criminal investigation remained at Salmaniya, she added, “as their medical condition still required close monitoring.”

Violence perpetrated by masked thugs in civilian clothes carrying guns and sticks — widely believed to be part of the security force — is something new and troubling in their country, Bahrainis say.

And so is the pettiness of the crackdown. Forty students abroad had their government scholarships suspended because they allegedly “called for the downfall of the ruling system,” an education ministry official said.

And when Bahraini artist Mohsen Ghareeb was taken from his home in the middle of the night by a force of almost 40 persons, some in military uniforms and some in civilian dress, they also destroyed items in his home, including art works belonging to Ghareeb, according to Bahraini novelist Fareed Ramadan.

Asked why Ghareeb might have been detained, Ramadan replied by email that Ghareeb’s family still has no idea.

“All I remember,” wrote Ramadan, is that he went to the Pearl Roundabout “where he used to draw.”

But government spite is at its height, perhaps, in the growls of the bright yellow pavers and rollers that are working night and day to finish asphalting over Pearl Roundabout, whose iconic Pearl Monument was torn down the third day of the crackdown. The newly configured intersection will have traffic lights.

And the memory of Bahrain’s short but vibrant protest movement will fade away, or so the government appears to hope.