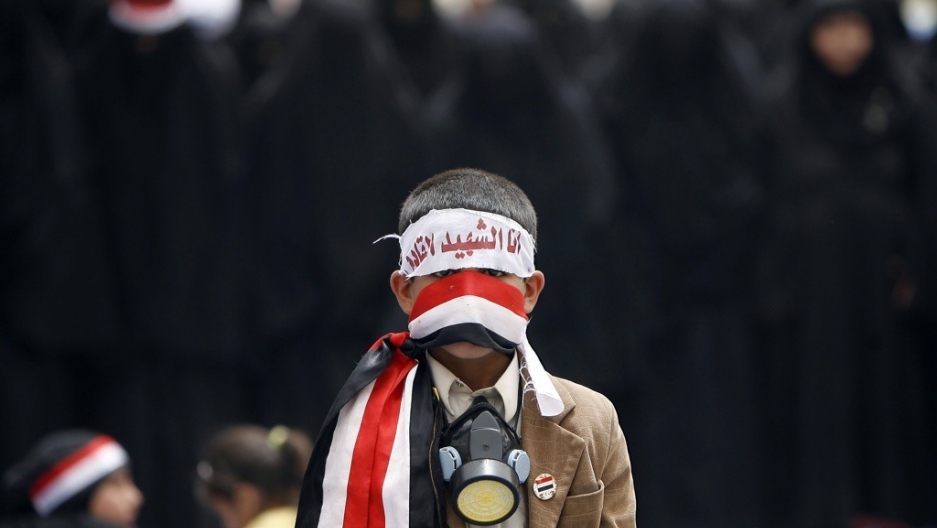 A young Yemeni wears a headband reading in Arabic 'I'm the next martyr,' during an anti-government demonstration in Sanaa on March 27, 2011.
Credit: Ahmad Gharabli
Share

The move appeared to coincide with a deadly explosion at an ammunitions factory in Abyan on Monday that killed more than 100 people. The explosion took place outside the city of Jaar as someone lit a cigarette, igniting explosive materials inside the facility, witnesses said.

Yemen’s state news agency issued a statement claiming that Al Qaeda in the Arabian Peninsula was responsible for the explosion.

“The incident happened after Al Qaeda terrorist elements seized the factory on Sunday and looted its contents, which led to inflaming of gunpowder and explosives in the factory,” according to Saba state news agency.

About 30 armed and hooded gunmen looted the factory on Sunday and made off with four vehicles and cases of weapons, according to news agencies.

Giving up control of Abyan province, a center of Al Qaeda activity, Yemen's president might be out to prove to the United States and Saudi Arabia — two former allies who have remained quiet as a widespread pro-democracy movement has taken hold inside the country — that his ouster would lead to a resurgence of terrorist activity, analysts said.

Yemen’s tribal regions have long been a destination for Al Qaeda militants who have taken advantage of the lack of government presence to organize, train and plan attacks. The United States has cooperated with the Saleh administration on counterterrorism efforts and now, one of the last-remaining elite military forces still under Saleh’s control is an American-trained counterterrorism unit, led by the president’s oldest nephew. It is this unit that withdrew from Abyan.

Abdul Ghani al-Iryani, a prominent Yemeni political researcher and analyst, said there had been no clashes between militants belonging to Al Qaeda in the Arabian Peninsula and the Yemeni military before or after the withdrawal, indicating the territory was voluntarily given up.

“The military has pulled out of Abyan. Yemen’s elite, American-trained counterterrorism units have been stationed in Abyan for months. For some reason, they have been pulled out. It is ridiculous to think that these elite units could not have held off an ill-equipped Al Qaeda advance. If Al Qaeda in the Arabian Peninsula was strong enough to take control of an entire governorate, they would have done so much sooner.”

Al-Iryani said that Khalid Abdul Nabi, an Al Qaeda member previously thought to have been “rehabilitated” through a government program, has been the driving force behind the Al Qaeda advance in Abyan. Abdul Nabi has served as a close ally to the Saleh government until his disappearance in January 2010.

Since a number of top military leaders defected to join protesters calling for the president’s resignation, Saleh has insisted that should he be forced out of power, Al Qaeda in the Arabian Peninsula would begin to take hold throughout the country and Yemen would become a “time bomb.”

U.K. Defense Minister Liam Fox has echoed that concern, saying that Al Qaeda’s presence in Yemen, coupled with the growing unrest, was worrying.

U.S. Secretary of Defense Robert Gates also expressed concern that Al Qaeda could take advantage of political unrest in Yemen, but declined to comment on whether the situation would be less worrying if Saleh remained in power.

"So if that government collapses, or is replaced by one who is dramatically more weak, then I think we'd face some additional challenges out of Yemen, there's no question about it. It's a real problem," Gates told reporters during a press conference in Russia last week.

Protesters on the ground in Sanaa are worried that the United States and the United Kingdom will fall for Saleh’s bait.

“The Al Qaeda in the Arabian Peninsula presence is overstated in Yemen,” said youth protest organizer Adel al-Sarabi. “The U.S. and the U.K. must understand that it is in their interest to develop a relationship with the protesters. Saleh is going to go and we are the new Yemen.”

Gregory Johnsen, a prominent expert on Yemen who is based in Egypt, said in an email that the political unrest is giving time for Al Qaeda in the Arabian Peninsula to regroup.

“AQAP and other militant groups are able to move around much more freely and there is concern that they will be able to acquire weapons and money from abandoned posts. The longer the transition drags on the more AQAP will benefit from the unrest,” he said.