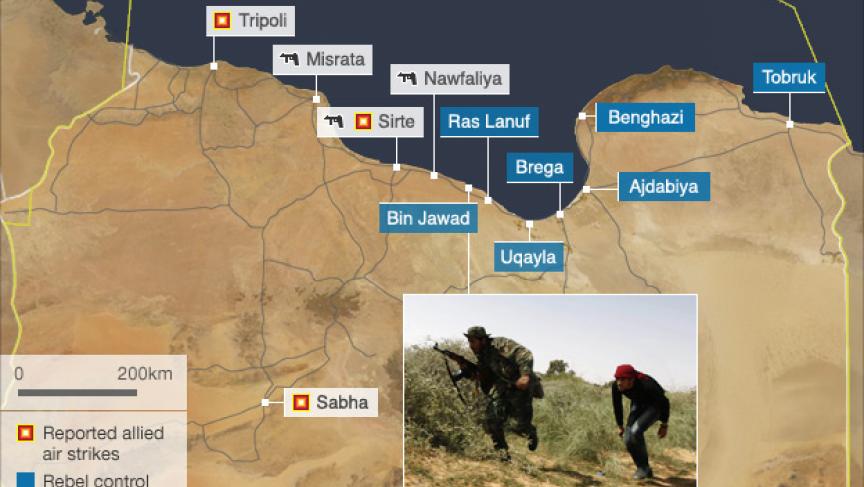 Share
By Ben Gilbert Rebels retreated east Tuesday from Libya leader Muammar Gaddafi's hometown of Sert — half way between the rebel stronghold of Benghazi and Ghadafi's capital of Tripoli. It comes after a weekend in which the rebels had regained ground after coalition airstrikes forced Gaddafi's troops to withdraw to Sert. In addition to the ground war, there's a media war going on in Libya. And the rebels in the east are trying to get their message to all t heir countrymen through "Free Radio Libya." Radio Free Libya It's not easy to find the studio of "Libya Al Hurra" or "Radio Free Libya." The location is a closely guarded secret. We had to get approval from the head of the media section at the rebel's provisional council, and were escorted by a member of his staff. Eventually, we drive to the station, at a former army base near Benghazi. Men with assault rifles guarded the entrance. The staff said they still fear an attack by Muammar Gaddafi's "sleeper cells." An engineer named Ramadan has been working at Free Libya Radio since the day after it started a month ago. He said the station's all-volunteer-staff is still in danger. "We received many messages threatening us, death threats: 'We will kill you one day, we are coming from the west to kill you,'" Ramadan said. Ramadan said the broadcast reaches listeners around the country — including Libya's capital, Tripoli, nearly 600 miles away. And Free Libya Radio has a symbolic history. Ramadan said this is the same transmitter that broadcast Gaddafi's announcement of his revolution in 1969. "And I hope his downfall or death will come also be announced from this station." The station broadcasts 12 hours a day in pursuit of that goal. It airs patriotic music that encourages the rebellion. Talk radio-style programs take calls from around the country about the current situation. The station also brings in hosts from the rebel-held east to talk about the revolution. Free to Speak Tuesday a host named Noureeya, from the town of Durna, read revolutionary poetry from 11 a.m. to 2 p.m. Poems like this one: "After 42 years of corruption and killing, the youth of Libya, the new youth rises up so they can destroy this old regime, and try to turn the table. But he's still killing and making massacres," Noureeya isn't new to radio, she used to host a cultural program on a radio station in her town. Now she's happy to broadcast to the whole country. "I come here to say some things about Libya. All the Libyans we are happy to say what we say," Noureeya said, "because when Moammar Gaddafi was here, I can't speak about what I want to speak. I can't." The Beginning Free Radio Libya was created spontaneously by one of the engineers previously responsible for keeping Gaddafi's broadcasts on the air. Bakab Khater shows us what he called his "workshop." It's filled with wires and other broadcasting gear. He worked here for 20 years as an engineer for the state-run broadcaster. And it's in this workshop that he set up Free Libya Radio's first studio on February 21. On that day, Gaddafi's forces had been defeated by protestors. Khater and a dozen others took the opportunity to enable the rebels to counter the state run media propaganda. They brought in some microphones and a mixer. "By simple things we made the studio here in my workshop, and connected to the transmitter, in one hour and twenty minutes. That's all it took," Khater said. The first words on the air were "we are with the revolution." Khater said he's always hated Gaddafi's regime. But he never thought the day would come when he could speak freely, and enable others to do so.