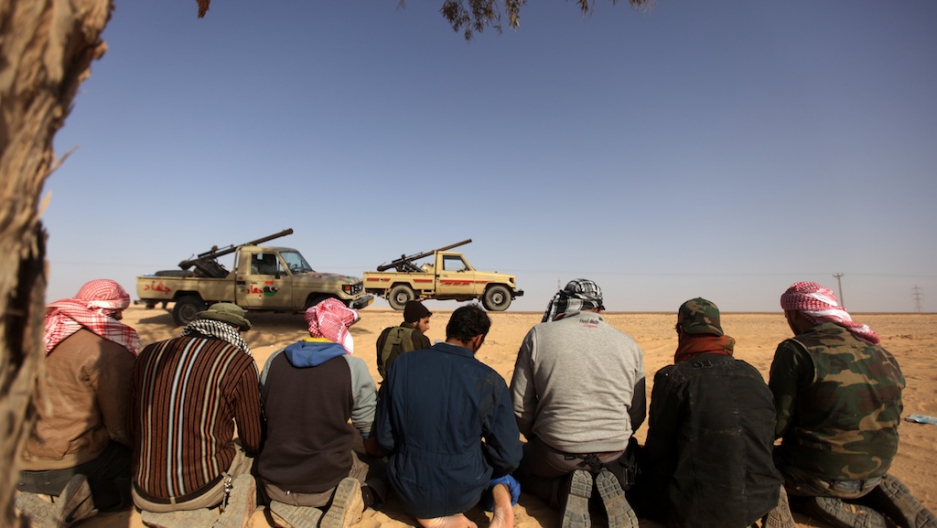 Libyan rebels pray on March 27, 2011, near Ajdabiya, which was the scene of fierce fighting the day before.
Credit: Patrick Baz
Share

Libyan rebels were advancing on Muammar Gaddafi's hometown Sirt on Monday after a night of international air raids targeted government forces in the strategic midway point on the road to Tripoli.

The strikes came after Libyan rebels recaptured two oil refineries and a port town this weekend and as NATO agreed to take full command of all military operations in and around the country.

Libyan state television confirmed airstrikes on Sirt and the capital Tripoli late on Sunday, saying they were being hit by "crusader imperialist bombardment," the Wall Street Journal reports.

NATO denied its air strikes were being used to provide air cover for the advancing rebels, with Lt.-Gen. Charles Bouchard of Canada, NATO's commander for Libya, saying the goal was to "protect and help the civilians and population centres under the threat of attack."

Sirt, a Gaddafi stronghold, is about halfway between the rebel-held east of the country and Gaddafi-controlled west. It will be difficult for rebels to capture the city given the strong support for Gaddafi, but such a victory could energize the opposition and give rebel fighters momentum as they try to capture Tripoli.

Some residents were fleeing the city of 100,000, The Associated Press reported, as soldiers from a brigade commanded by Gaddafi's son, al-Saadi al-Gaddafi, streamed to positions on the city's outskirts to defend it, witnesses said.

As the bombardment of Libya continued, NATO agreed at a meeting in Brussels to take over the mission. The decision, which will be implemented immediately, relieves the United States of leading the campaign and will enable it to play a more subordinate role in the operations.

NATO will now be responsible for not only enforcing a no-fly zone over Libya and arms embargo but also protecting civilians from Gaddafi's forces.

"We are already enforcing the arms embargo and the no-fly zone, and with today's decision we are going beyond. We will be acting in close co-ordination with our international and regional partners to protect the people of Libya," NATO Secretary General Anders Fogh Rasmussen said as reported in BBC.

The precise rules of engagement have not been disclosed, BBC states.

Rebels recaptured the gateway city of Ajdabiya Saturday and then went on to retake Brega and Ras Lanuf, two strategically important oil towns.

"The ease of the rebel march west along the coast underscored the essential role of Western airstrikes, now focused mainly on Colonel Gaddafi’s ground troops, in reversing the rebels’ fortunes," the New York Times states. "But it also framed anew the question of how the poorly equipped and disorganized rebel forces might fare against Colonel Gaddafi’s garrison in Sirt, where air cover may be less useful than it was along the open coastal road."

“Some were attacked as they were clearly moving westbound,” Ibrahim said. “Clearly NATO is taking sides in this civil conflict. It is illegal. It is not allowed by the Security Council resolution. And it is immoral, of course.”

President Obama will address the nation Monday night to explain the situation in Libya to the American public. He has faced questions over the necessity of the campaign as well as its mission and duration.