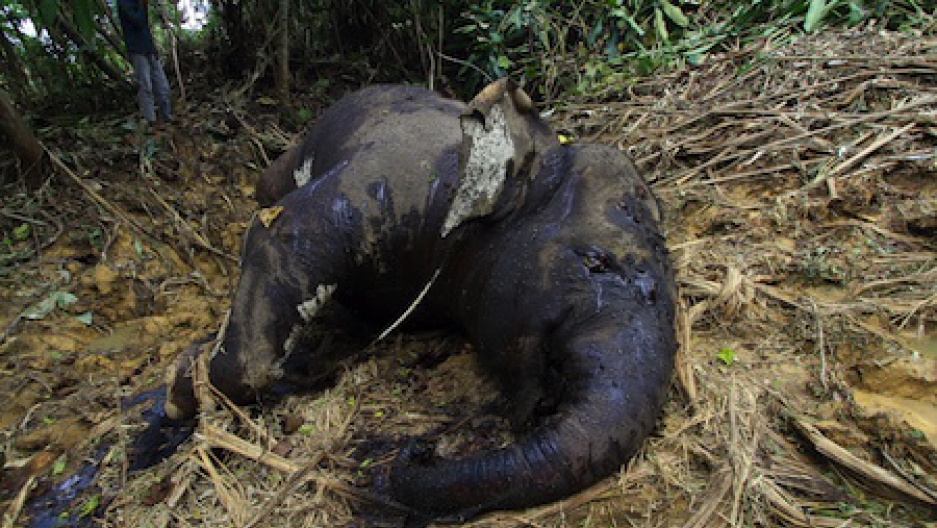 A villager closes his nose as he stands next to a dead elephant at Serba Jadi sub-district in East Aceh, Aceh province, on December 10, 2010. Three endangered Sumatran elephants have been found dead after their herd rampaged through a village in western Indonesia, a conservationist and officials said. The cause of the animals' deaths is being investigated but a local conservationist said they might have died after eating poison intended for wild boars as they scavenged for food at village stores. There are up to 3,350 Sumatran elephants remaining in the wild, according to the environmental group WWF.
Credit: SUTANTA ADITIYA
Share

If elephanticide isn't a bummer, I don't know what is.

Wildlife groups and local authorities in are working to unravel an odd murder case: three dead elephants, possibly poisoned, in a village on Indonesia's island of Sumatra.

Who would snuff out an elephant? Perhaps villagers who've suffered repeated elephant stampedes. In December, the pachyderms barged into their fields, devoured their crops and even looted their homes, according to the Jakarta Globe.

That was the motive behind five other elephant deaths the previous month. In the same province, Riau. (Authorities don't appear to suspect poaching, which is also a threat to Sumatran elephants.)

The latest elephant body dropped in Riau last weekend, right in the middle of the street, the Jakarta Globe reports. This one, an adult female, likely succumbed to severe malnutrition and hydration instead of poison -- though a villager interviewed by the Globe said her ears were scarred from hurled stones. Sadly, she left behind two young calves.

The deaths have become so frequent that the World Wildlife Fund has offered to set up a human-elephant conflict resolution team. Who's the blame here?

It's easy to blame this poisoned elephant epidemic on villagers. But they've suffered too. In Indonesia, where many get by on just $2 a day, an elephant feeding frenzy in your fields could literally prevent someone from feeding their kids.

The real problem, a local conservation officer told the Globe, is the clearing of nearby forests. A starving elephant is unlikely to turn down an unguarded field of crops.

This string of elephant deaths isn't even native to Indonesia. The Times of India reports on a "growing tussle for land" between elephants and locals in the country's northeast. Death toll: four elephants. Suspected cause of death: poisoning.