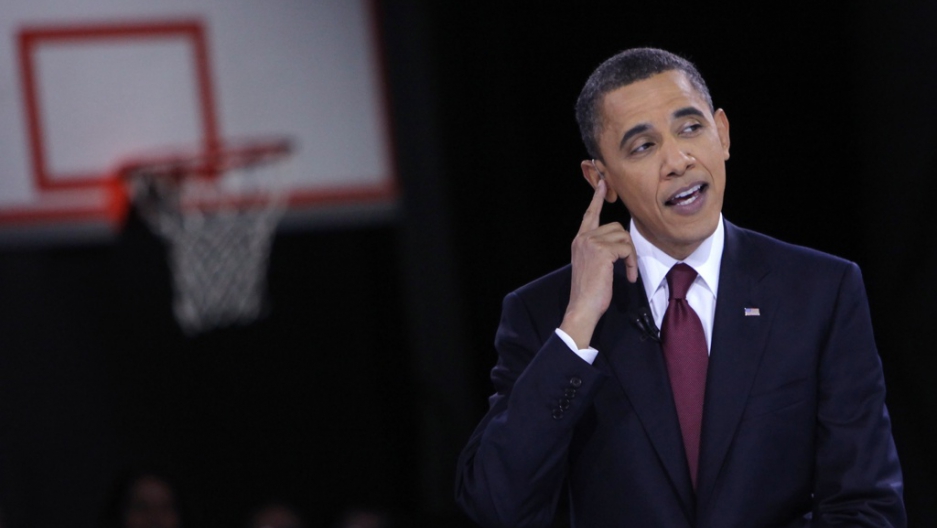 President Obama's speech Monday night may have been designed to reassure Americans about the latest front in the Muslim world.

But there's one powerful group whom the speech did nothing to assuage: Washington's foreign policy elite. They fret that the policy is too ad-hoc; that the United States is engaged in a bombing campaign that lacks clear, acceptable objectives; and that the president hasn't yet faced the imperative that he will have no choice but to finish the job.

“You get the feeling that [Obama] is saying, ‘well, we’ve just got to do something, so let’s bomb those sites,’” said Danielle Pletka, a vice president at the American Enterprise Institute, a conservative Washington, D.C. think tank, who moderated a conference on the war today.

“But if you have no actual vision of where to go, there’s no possible means of getting there. In fact, don’t you guarantee a stalemate of some sort or another?” she asked.

(Read a transcript of Obama's address to the nation Monday night.)

To put a finer point on the matter, the president faces a quandary. It’s not so much that he's unsure of the outcome he wants in Libya. Since anti-government protests turned violent more than a month ago, he has repeatedly stated that Libyan leader Muammar Gaddafi must go.

Instead, the war presents a dilemma that strikes at the heart of his foreign policy worldview — namely, that American military muscle should be used sparingly, and only with the consent of the international community.

A fierce critic of President George W. Bush’s penchant for unilateralism, Obama insisted on getting the go-ahead from the United Nations before intervening in Libya. But the U.N. approval that he received falls short of allowing the explicit targeting of Gaddafi.

Deprived of that permission, there are three possible outcomes for Operation Odyssey Dawn: a rebel victory over Gaddafi, a Gaddafi defeat of the rebels, or a stalemate.

In recent days the rebels have made significant advances, thanks to the close air support the allies are providing. But they are largely an untrained, undisciplined and poorly-armed force. Taking the capital and toppling Gaddafi poses an enormous tactical challenge.

On the other hand, Gaddafi isn’t likely to win while allied warplanes are effectively implementing a no-fly and no-drive zone. So experts say that the administration needs to prepare for chance of a longer war, or a drawn-out stalemate, with all of the gruesome and destabilizing possibilities that one would bring.

“I believe that it was right to intervene in Libya because of the pressing humanitarian concern,” said Kenneth Pollack, a Middle East expert at the Brookings Institution. “The question is, now what? The problem with no-fly zones is that they are not decisive military operations…. It’s all well and good to be praying every night that someone is going to put a bullet in Gaddafi’s head, but that’s not a strategy.”

Pollack offered a cautionary tale illustrating the potentially dire consequences of not eliminating Gaddafi. In 1984, he says, Gaddafi launched “one of his many quixotic invasions of Chad. The French deployed a military force to Chad, bringing the Libyan invasion to a halt. Gaddafi and [French President] Francois Mitterrand struck an agreement whereby both sides would pull out of Chad. And of course the French abided by the agreement, and the Libyans didn't. They left their forces in place, camouflaged them and resumed the invasion as soon as the French were gone. So the idea that you could stop the slaughter of civilians and then walk away, leaving Gaddafi in place doesn't make sense.”

In the current conflict, “The most likely outcome is some form of ‘operational pause’ … in which the rebels are not well enough organized, are not mobile enough, don’t have enough fire power, particularly to bust through the gates of Tripoli. And Gaddafi doesn’t use his frequent flier miles to go to Caracas, or wherever he would end up,” said Thomas Donnelly, an analyst at the American Enterprise Institute and a former staff member on the House Committee on Armed Services.

Anything short of defeating Gaddafi would be unacceptable, argued Paul Wolfowitz, a visiting scholar at the American Enterprise Institute and a lead architect of President Bush’s invasion of Iraq.

“We have never dealt with Gaddafi in the state he will be in if he succeeds in keeping control of half of Libya. With $6.5 billion dollars, more or less, in gold bullion and probably a lot of bank accounts we still haven’t had access to, Gaddafi is going to be insanely bent on revenge and much more dangerous than anything we’ve encountered before,” he said.

If a stalemate emerges, Obama’s political options are unenviable. With China and Russia on the Security Council, he’s very unlikely to get U.N. authority to eliminate Gaddafi. Moreover, American-led regime change in Libya would not play well with Obama's Democratic base, nor would it set a constructive precedent for future efforts to get international approval for limited military intervention.

So what are his options?

“The administration has some difficult choices to make,” said Michael O’Hanlon, a security expert at the Brookings Institute. Unless the rebels make rapid progress, “Chances are in the next one to two weeks, they are going to have to figure out if they are going to escalate. And that escalation could cover a wide range of possibilities. Some of which could raise legal issues, such as arms transfers to the rebels. Others could involve putting American Special Forces on the ground or other people to try to figure out what’s going on, to get better battlefield intelligence and help the rebels coordinate more effectively.”

If the conflict drags on, another possibility would be to use the CIA to “start building up the Libyan opposition, although that’s going to take years,” Pollack said.

In the 2001 Afghanistan invasion, O’Hanlon points out, “The use of American airpower, plus some Special Forces on the ground did remarkable things in conjunction with the Northern Alliance,” succeeding in toppling the Taliban regime. “The administration is going to have to think hard about whether it would contemplate such options.”

“One of my great concerns about Libya is that when American troops are in combat, that’s where our attention goes,” Pollack, the Middle East expert, said.

He argued that the United States has higher priorities. One is Egypt, the regional giant and most critical country, which Pollack fears Obama is starting to neglect. Another is Iraq, “where we’ve had this democratic experiment going on, and I think the administration has done a pretty poor job of pursuing it.”

Wolfowitz added that a Gaddafi victory or a protracted conflict would complicate America’s ability to help shepherd a positive outcome elsewhere as the “Arab Spring” unfolds.

“Arabs are suddenly discovering that there’s no reason why they can’t have freedom,” he said. “The Western world has a chance to embrace the idea of freedom for the Arab world, and that’s something that Al Qaeda and Iran are in no position to do. If we fail to take advantage of that common interest than we have really lost a historic opportunity.”