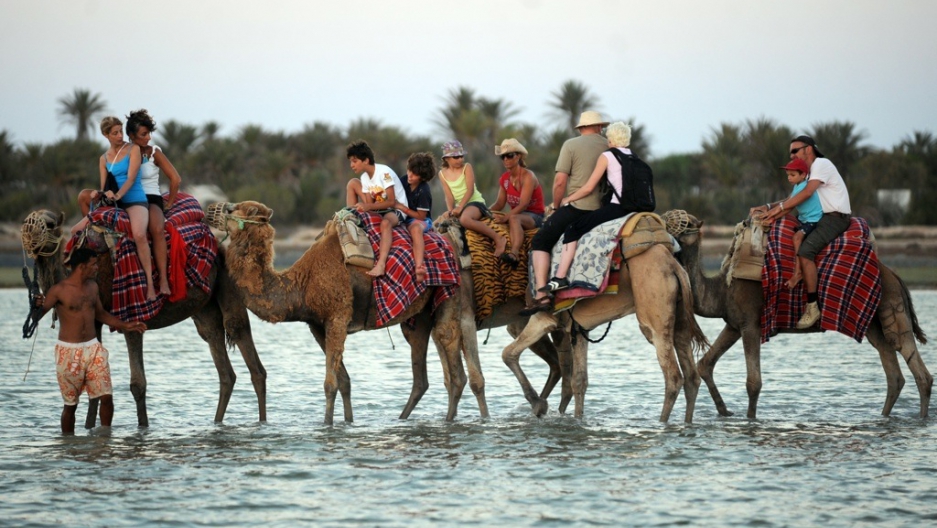 Tourists enjoy a camel ride during their holidays in Djerba on August 1, 2010.
Credit: FETHI BELAID
Share

HAMMAMET, Tunisia — A few months ago this former Mediterranean fisherman's village was a bustling, popular destination for European tourists.

But now, several weeks after Tunisia's "Jasmine Revolution," the white sand beaches of Hammamet are empty. The old fortified town that is normally a busy attraction is deserted: The museums and most souvenir shops are closed, and waiters stand around in empty restaurants hoping for visitors to show up.

“I haven't sold a thing in weeks,” said Jihad, a young man who works in a clothing shop. “There are very few tourists here and they don't leave their resort out of fear.”

When the protests started in the center of Tunisia in early December and made their way up north, thousands of tourists were evacuated from the resort towns. After the fall of President Zine El Abidine Ben Ali, the country saw a drop of 40 percent in the number of tourists in January.

Things haven't improved since then either: With a bloody insurrection in neighboring Libya, demonstrations still rocking the Tunisian capital and a reported rise in crime, cancellations have skyrocketed.

In late January, the credit rating agency Fitch cut its 2011 growth forecast for Tunisia from 5 percent to 2 percent, saying that political unrest would hit the tourism sector the hardest. That is a crisis for this country of 10 million people because the tourism sector employs about 400,000 Tunisians and hundreds of thousands more live indirectly from it.

“The entire town lives from tourism," said Azais, a taxi driver in Hammamet. "Less people have been coming and so many people's lives are affected.”

The interim government has launched the “I love Tunisia, the place to be ... now!” campaign to attract people back to the country and tour operators have significantly slashed their prices. Today, a package vacation to the four-star Hammamet Regency can be booked for 200 euros instead of 450 euros a week — but still very few tourists are coming.

Earlier this month, Tourism Minister Mehdi Houass said the Jasmine Revolution's overthrow of Ben Ali was " good promotion" that may help the sector because Tunisia had become famous worldwide.

"The revolution has made our country known around the whole world," he told Reuters. "We want to tell all our friends [abroad] that they can come to Tunisia [and experience] an atmosphere of peace [and] freedom."

But European tourists are avoiding countries affected by the Arab revolutions like Egypt, Tunisia and even Morocco. The largest European tour operator, German-owned TUI, has predicted a possible loss of 35 million to 60 million euros. Club Med announced a loss of between 5 million and 8 million euros, and British operator Thomas Cook expects a cut in profits of 24 million euros in the second quarter of this year.

"I am certain Egypt and Tunisia will recover quickly and reclaim their place on the tourism map," he told journalists in Berlin last week.

Market research shows a different picture. Only 54 percent of French tourists who planned to go to Tunisia this year kept their bookings, while 41 percent plan to wait several months, and 5 percent several years, according to the firm GFK.

Tunisia is hoping that European tourists will return to enjoy the country's 875 miles of Mediterranean coastline, Roman ruins and the Sahara desert.

The Chich Khan hotel, a gigantic resort in Hammamet owned by the Spanish chain Iberostar, has decided to keep its doors open. Most of the rooms are empty, and the hotel is barely making enough to support its costs.

“Currently, we mostly have Tunisian guests — February has been extremely slow,” said Walid Rakez, the assistant general manager of the hotel. “It's picking up slowly. I am very optimistic. People who want to discover the new free Tunisia will come in great numbers. I think we're going to see more of cultural tourism.”

Tunisians, however, are not regretting the high economic price they are paying for overthrowing a dictator.

“As the old expression goes: 'Dignity before bread,'” said Mohammed, a hotel reception manager on the southern island of Jerba, the other major tourist destination in Tunisia. “People are happy to be able to speak, to be free.”