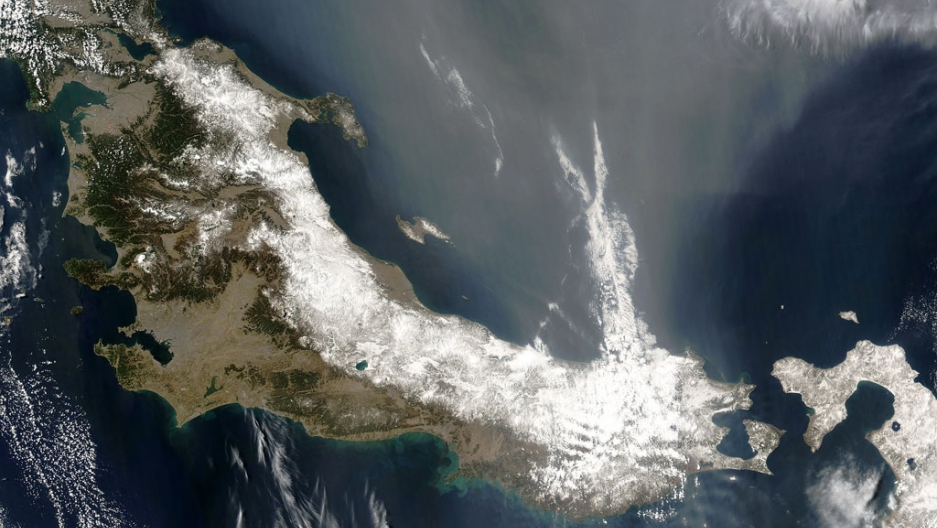 A satellite view on March 13, 2011, of northeastern Japan following a massive earthquake that hit the area on March 11.
Credit: NASA
Share

TOKYO, Japan — Workers at a stricken nuclear power plant are exposed to dangerous levels of radiation; parents in Tokyo are told not to give contaminated tap water to babies; tainted milk, fruit and vegetables are subject to export bans.

If that wasn’t enough, today’s reports of soaring radiation levels at another reactor at the Fukushima Daiichi atomic power station served as a reminder that Japan’s nuclear crisis is far from over.

Radioactivity levels in one part of the stricken Fukushima Daiichi nuclear plant were reported at 10 million times higher than normal on Sunday. Tokyo Electric Power Co. (Tepco), the plant's operator, has subsequently said the readings were lower than first reported. But that has done little to calm the nerves of people for whom a daily stream of grim news from the nuclear plant is fast becoming a fact of life.

Moreover, tests conducted on the surface of a pool of water in the No. 2 reactor revealed radioactivity of 1,000 millisieverts per hour – four times the level deemed safe by the government. Hidehiko Nishiyama, a spokesman for Japan's nuclear safety agency (Nisa), said: "This is quite a high figure." The water was "likely to be coming from the reactor."

And yet for all the public anxiety over exposure to radioactivity, Japan is fighting an equally critical health emergency on another front.

More than two weeks after a tsunami devastated the country’s northeast coast, tens of thousands of evacuees face serious health problems and a future clouded by trauma.

Repairs to supply roots and the steady stream of aid and volunteers have eased food, water and fuel shortages for some of the 250,000 thousand people enduring freezing, cramped conditions in thousands of shelters in the disaster zone.

But health workers on the ground in the three worst-hit prefectures – Fukushima, Miyagi and Iwate – report shortages of medicines and vital equipment as they struggle to provide even basic care in a region whose health infrastructure will take years to rebuild.

Some hospitals were engulfed by the tsunami; those that still stand are barely functioning amid shortages of staff and supplies.

Emergency shelters are a breeding ground for ailments that pose a threat to the many elderly people who have been made homeless by the tsunami, or forced from their homes by the nuclear evacuation.

Meanwhile, the estimated 75,000 children who have been displaced by the disaster will require counseling to prevent the hideous scenes of the past two weeks from having a lasting impact on their mental health.

Doctors and other health professionals are working in conditions far worse than they have ever experienced.

Junichi Yabe is one of countless doctors who have become volunteers in the wake tsunami. He is better placed than many to gauge the size of the medical crisis unfolding on Japan’s northeast coast.

The 48-year-old doctor, a former specialist in coronary heart disease in Tokyo, lives in Sukagawa, a city of 80,000 people located 60 kilometers from the Fukushima nuclear plant – inside the 80-kilometer evacuation zone advised by the United States.

For the past two weeks he has been treating some of the 1,200 local people forced out of their homes by the nuclear crisis, as well as those from the city and beyond who lost their homes in the earthquake and tsunami.

Yabe’s experience mirrors that of numerous colleagues across the quake zone: depleted medicines and other supplies, a lack of mobility due to a fuel shortage and an evacuee community dominated by the elderly.

“In this area we still have enough drugs in stock,” he said. “We can administer injections and put people on intravenous drips, but we are beginning to run low. Most of the people here are elderly, which reflects the local demographic. The average age of the patients at my clinic in Sukagawa is over 70.”

Yabe and about 10 other doctors regularly tour evacuation centers and hold consultations for people with non-life threatening illnesses. In recent days he has noticed an increase in the number of children suffering from common colds, diarrhea, fevers and, in a few cases, influenza.

Elderly victims, meanwhile, face grave threats to their health. Many were already suffering from chronic illness and disabilities before the tsunami. Some scrambled to safety as waves engulfed their homes, only to die of exposure or other health complications in the shelters.

The enormity of the health crisis facing post-disaster Japan is evident at a nursing home in Miyagi prefecture, where of the 1,579 victims identified so far, 45 percent were aged 70 or over.

Forty-six of the home’s 136 residents died when water swept through its lower floors. The survivors were taken to shelters, but 10 have since died from suspected hypothermia, dehydration and thrombosis. All of them were aged well over 80.

Across the quake zone, hospitals are overrun with patients clinging on to life in conditions no health worker could ever have envisaged. The stench of excrement fills wards that lack basic hygiene due to a lack or water and power.

Conditions in the some shelters are even worse. Volunteers lack water to wash their hands and plates, while occupants are forced to defecate in hastily dug latrines. In desperation, some have taken to drinking water from streams and rivers.

Under those conditions, it is no surprise that health workers are reporting outbreaks of diarrhea, gastroenteritis and other ailments associated with poor sanitation. Aid workers say that the disposal of sewage and provision of clean drinking water is essential if the shelters are to avoid falling victim to even more serious diseases such as typhoid and cholera.

Even when homes are rebuilt and communities reunited, Japan’s health-care system is poorly equipped to deal with long-term mental health problems triggered by the disaster.

Thousands of victims will be in need of long-term trauma counseling to cope with the loss of their relatives, friends and homes.

Save the Children, a British charity that has been in Japan since soon after the quake, says child evacuees are suffering from insomnia and anxiety.

“They have lost their homes, all their belongings and in some cases their family and friends in sudden circumstances,” said Stephen McDonald, the organization’s response leader in northeast Japan.

“It is essential that children are given all the support they need to come to terms with what has happened so they can avoid emotional problems later on.”

Save the Children has set up child-friendly spaces in evacuation centers where children can play, supervised by professionals, while the adults can focus on securing food, water, work and proper accommodation.

“I’m happy we have this because we can meet other children,” Mai Miura, a 12-year-old evacuee said. “I haven’t seen my friends for a long time, and we have been very bored in the evacuation center.”

Patrick Fuller of the Red Cross’s International Federation says the gradual re-opening of supply routes will improve access to drugs and pastoral care for those exhibiting signs of post-traumatic stress disorder.

But Fuller, who is based near Otsuchi, an Iwate prefecture town where more than half the 19,000 population is thought to have died, says nothing could have prepared them for the size and complexity of the humanitarian crisis: “It’s the sheer scale of it. You could have a thousand helicopters and it still wouldn’t be enough. There must still be pockets of people out there who haven’t been reached.”

Dr. Yabe shares concerns held by other health workers about the psychological toll the disaster and uncertainty over the nuclear plant are taking on evacuees.

“People here are very uneasy,” he said. “Some have lost their homes and have no idea where they will go after this. And everyone, myself included, is worried about the nuclear power plant. I’m not a psychologist, and for the time being all I can do is reassure people and tell them that no matter what they’re going through at the moment, things will get better

“In my 23 years in medicine, I have never seen anything as terrible as this.”