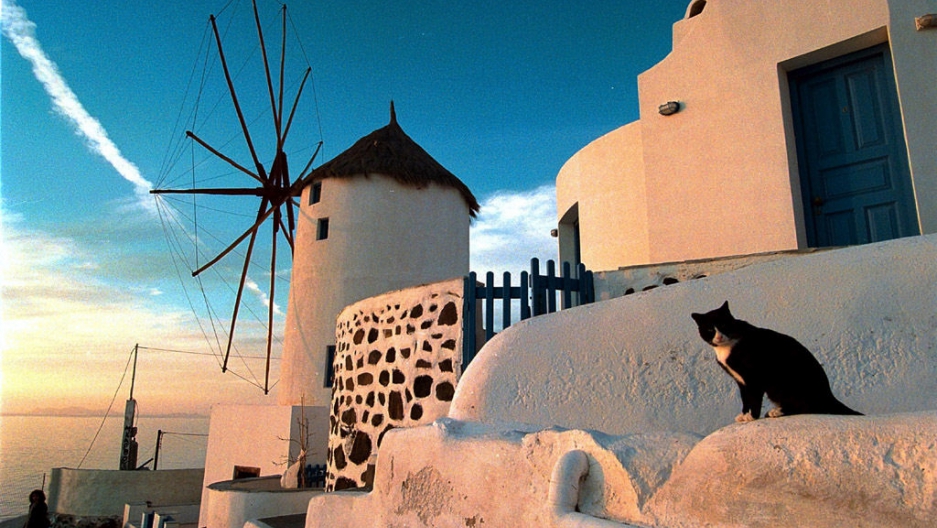 This cat in Santorini, Greece won't be alone for long if tourists flock, as expected, to southern Europe in the wake of unrest in North Africa and the Middle East.
Credit: Milos Bicanski
Share

ATHENS, Greece — As Marcos Mourtzanakis, a 41-year-old Greek-Lebanese hotelier, learned last year, violent demonstrations at home are really bad for business. In 2010, as anti-austerity strikes and Molotov-fueled street fights in Athens made international headlines, reservations dropped at the small eco-hotel he runs with his wife, Smaragda, in an olive-tree-dotted valley in northern Crete.

This year, though, the big protests are in North Africa and the Middle East, and the bookings at Achlada-Mourtzanakis Residence — as for most hotels in southern Europe — have rebounded. That’s an especially happy development for Greece, Portugal and Spain, where tourism could revive struggling economies.

“It’s good news, at least for right now, since last year it was all strikes and turmoil here,” said Mourtzanakis, who opened his hotel in 2008. “It’s an opportunity for the region, but it will be interesting to see what we do with it.”

According to a spokesperson for Thomas Cook UK & Ireland, the second-largest European tour operator, the revolution in Egypt diverted many tourists to Spain and Greece in the first three months of the year. Bookings to the Balearic Islands near the eastern coast of the Iberian Peninsula increased by 30 percent compared to last year, while bookings to Greece went up 20 percent. And the trend appears to be holding through April, which has seen a 25 percent increase in bookings in Spain, especially the Canary Islands, the tour operator said.

Andreas Andreadis, president of the Hellenic Hotel Federation, said he expects a 10 percent increase in tourism arrivals to Greece because of the unrest in North Africa. “We were already seeing an improvement from last year, but the events in North Africa sped things up,” he said.

But a spokesperson for the United Nations World Tourism Organization said southern Europe should not expect this diversion in tourism to last long. Travelers are already returning to Egypt and Tunisia, and the the organization is still expecting international tourism in the Middle East to increase by at least 7 percent.

Southern Europe accounts for some 18 percent of international tourist arrivals and 19 percent of international tourism receipts, the organization said. Tourism makes up 11 percent of GDP in Spain and Portugal, and at least 16 percent of GDP in Greece, which has relied on a steady stream of income from millions of tourists, especially to marquee islands such as Santorini in the Cyclades, with its postcard views of whitewashed homes on black-rock cliffs around a deep-blue caldera.

But in recent years, European tourists seeking the sun-and-sea experience have gone to Tunisia or Egypt, where it’s cheaper. American tourists, meanwhile, often choose the Caribbean or Hawaii for beach vacations and have traveled to southern Europe “out of tradition,” said Paul Cohen, president of Partner Concepts, a marketing firm in Annapolis, Md. “For Americans, European countries like Italy and Greece were where you went when you grew up and acquired wealth," he said.

But Cohen added that the high value of the euro, the currency used in the European Union, has made most European vacations expensive for Americans in the last few years. And in the last two years, Greece in particular has also struggled with a bad image. In late 2008, the country was hit by weeks of rioting, especially in the capital, Athens, after the fatal shooting of a teenager by a police officer. That was followed in 2010 by near-constant strikes that grounded flights and docked ferries, as well as demonstrations that often became violent. Three young workers died last May after fringe protesters firebombed a bank.

The demonstrations last year were sparked by austerity measures approved by the government in exchange for 110 billion euros ($153 billon) in international loans to avoid bankruptcy. The country is more than 300 billion euros ($423 billion) in debt and is struggling through the third year of a deep recession that has pushed up unemployment to nearly 15 percent.

The country’s dire straits have prompted “a lot of soul searching, especially in the tourism industry,” said Andreadis.

“For years, many people thought they could make easy money by opening a small, cheap hotel and partnering with a tour operator who would automatically bring them busloads of guests,” he said. “They didn’t try very hard because they thought people would come here no matter what.”

Andreadis said Greece is trying to reinvent itself as a tourist destination and steer away from its beach-party, night-clubbing past to a more erudite future that emphasizes culture, the environment and boutique hotels that cater to specialities such as ecotourism and regional food and wine.

Marcos Mourtzanakis, who runs the small eco-hotel in Crete, said he hopes this new attitude will help revive the country’s appeal and go a long way in improving its economy through tourism.

He said he and his wife built their hotel on family land not far from the city of Aghia Pelagia, a once-beautiful and traditional beach town that, like many tourist destinations in Greece, has succumbed to a nondescript resort culture of bars, fast food and big-box hotels.

A few miles inland, in a rocky mountain valley surrounded by 500-year-old olive groves, he and his wife saw a bit of paradise. They first walked through the family land in 2005, trailed by a herd of sheep, and were moved by an epic view of a burnt-orange sunset sparkling on the sea. So they built four traditional villas, a communal dining space, a patio and two small pools on the land.

“If we want to make any increase in tourism permanent, and really help our economy, we have to offer something more than a temporary refuge based on a reaction to world events,” he said. “We can’t keep making the same mistakes we made in the past.”