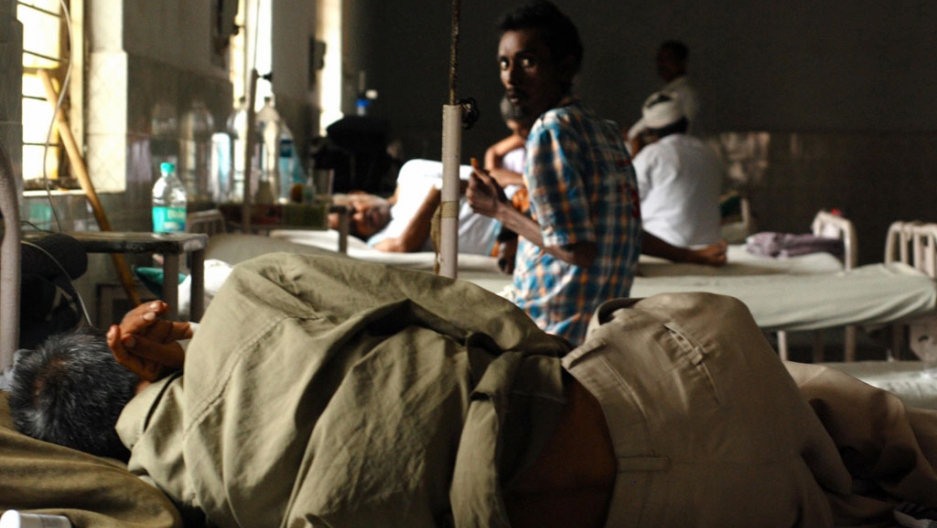 A ward of the Tuberculosis Civil Hospital in Ahmedabad, India, on July 16, 2009.
Credit: Marine Simon
Share

MUMBAI, India – Nearly four decades ago a janitor at a Mumbai hospital raped a young nurse, strangling her with a dog chain. The nurse, Aruna Shanbaug, plunged into a vegetative state from which she never recovered.

Thirty-seven years later, the courts say she could be allowed to die — should those who care for her deem it the best decision. Right-to-die activists are heralding the landmark ruling as as step forward, though in a somewhat surprising turn of events, the nurses who care for Shanbaug have not chosen to exercise this new right.

Regardless, the court's decision to allow passive euthanasia has once again provoked debate over whether terminally ill patients should be allowed to die willfully.

India’s Supreme Court laid out guidelines this month that will allow so-called passive euthanasia in exceptional cases, adding India to a handful of countries that permit some form of the practice. Passive euthanasia is when life-saving treatment is deliberately withheld from a patient.

“It’s a progressive step forward,” said Surendra Dhelia, joint secretary of the Mumbai-based Society for the Right to Die with Dignity. “With this judgment, at least we have started talking about passive euthanasia.”

However, the court simultaneously denied a plea for euthanasia to be applied to Shanbaug.

Author and activist Pinki Virani had petitioned the court for Shanbaug to be allowed to “rest in peace” after nearly four decades of brain damage and paralysis. The judges, though, decided that the decision was not Virani’s to make.

The court ruled that the nurses who have been feeding and caring for Shanbaug at King Edward Memorial Hospital, where she used to work, have become her virtual family and are the only ones in the position to decide her fate. The nurses pushed to keep Shanbaug alive and celebrated the court decision.

In Europe, Luxembourg, the Netherlands, Belgium and Switzerland allow some form of euthanasia. And in the United States, Oregon, Montana and Washington have legalized it for certain patients.

In India, the court’s guidelines will restrict use of the practice to only extreme cases. The guidelines are legally binding until parliament passes a law on the practice.

The guidelines stipulate that passive euthanasia will be allowed for patients who are in permanent vegetative states when family members request it, and courts and doctors approve and oversee it.

The guidelines do not allow voluntary euthanasia, in which the doctor gives a terminally ill patient a lethal dose of a drug, or physician-assisted suicide, in which the patient ends his or her own life with help from a doctor.

Activists and doctors in India who support euthanasia said they hope the judgment leads to the further legalization of the practice here.

Dhelia said that India should allow people to end their lives peacefully by fully legalizing voluntary euthanasia. Furthermore, the court should prevent cases like Shanbaug’s, in which someone falls into a vegetative state and cannot make a decision, by giving legal sanction to arrangements people make ahead of time such as living wills.

“We should be allowed to have a peaceful exit,” he said.

Some also argue that allowing voluntary euthanasia will help not only patients but also family members who have to bear the emotional and financial burden of caring for terminally ill loved ones.

“Not only does the patient suffer, it’s the family around the patient that is suffering,” said Ahmad Mecklai, the chief of operations and projects-in-charge at Mumbai’s Prince Aly Khan Hospital. Mecklai hopes this represents the first step in allowing voluntary euthanasia.

A combination of a cultural practice to care for one’s parents, a scarcity of hospices, poor health insurance options and a refusal by most hospitals to keep patients for long leaves many families taking on the emotional and financial responsibility of caring for terminally ill parents at home, he said.

The debate over the nurse has led to concerns that people might exploit the practice to benefit from a wealthy relative, said Sharad Agarkhedkar, the president of the Pune chapter of the Indian Medical Association.

Agarkhedkar said that euthanasia should also be outlawed because it jeopardizes the chance for a recovery.

“Sometimes we do see miraculous recoveries,” he said, referring to cases he has had of patients who managed to gradually come back after what appeared to be life-threatening injuries or disease. “So why should we not give them the chance to recover?”

Rather than legalizing euthanasia, he said, the country’s healthcare system should be revamped to provide better care to India’s terminally ill citizens.