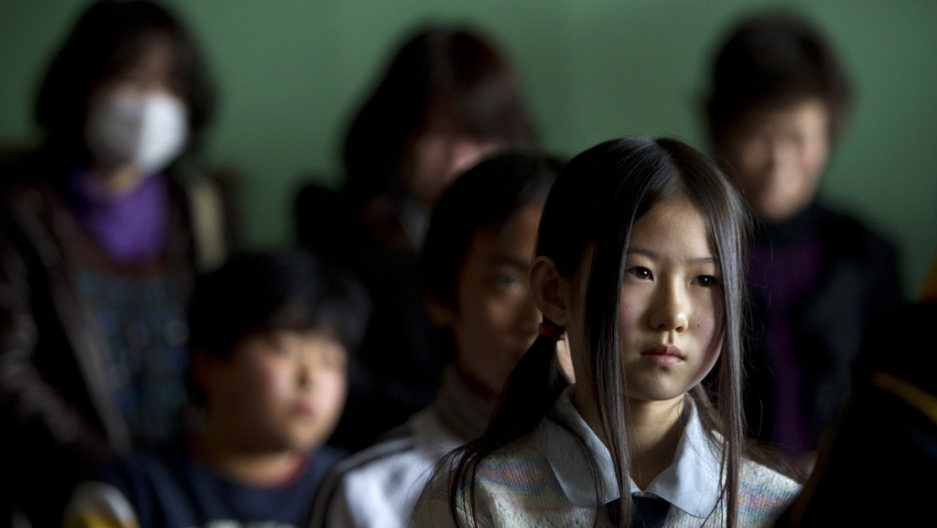 OOKAWA, Japan – After the earthquake struck on March 11, the tsunami warning sounded near Ookawa Elementary School, located in this riverside town two miles inland from the sea in Ishinomaki, northeastern Japan.

But having never been hit by post-quake waves before, nobody in the town thought it would reach them. The teachers filed the more than 80 children out of their classrooms and onto the playground, where they thought they would be safe from aftershocks.

One of the teachers, Jinji Endo, pleaded with the others to seek higher ground. He took the one child who would listen to him and fled up the steep hill behind the school.

Everyone else was still inside the school grounds when the 25-foot wall of water rose out of the Kitakami River, up and over the nearby rice paddies.

All but a shell of the school was washed away by the tsunami. Only the one teacher who went up the hill and a couple of dozen pupils survived, most of whom were absent that day.

Heavy digging equipment was only able to reach Ookawa on Thursday, 13 days after the disaster, revealing the full scale of the devastation that occurred here.

The roads had been impassable for large vehicles. Two hundred feet of a connecting bridge was carried a mile upstream, and the only other road was torn to pieces by the tsunami.

“I can't help thinking that if they had only gone up the hill just behind the school, they would likely have survived,” said Emi Ogata, whose two children were among those who died. “The teachers did their best to protect the children, they died too. I can't blame them.”

Rescue workers have found the body of her son, 10-year-old Ryusei, but not yet her daughter, Karen, 7.

“We can't cremate the bodies as the person who does it died too,” said their father, Kazutoshi Ogata. “We got special permission to bury him, so we laid him in the grounds of the temple, which is just up the hill. At least we have buried our son; we can only wait to find our daughter.”

“We found our son's school bag, his safety helmet and calligraphy brushes, but nothing of our daughter's yet. My elder son, who is 13, is still alive — he was at the nearby junior high school and was saved. All I can do is live for him now.”

“They were such lively kids, all three of them do karate, and Ryusei was already a black belt,” said Kazutoshi Ogata as his wife showed a photo of their two youngest children in their karate suits at a local tournament.

Once the diggers arrived, bodies were found by the dozens.

“I've looked at so many dead children trying to identify my own, and most of them are friends of my kids, or classmates, it hurts so much,” said Kazutoshi Ogata, who helped firefighters with the initial search using shovels and his bare hands.

No buildings in Ookawa were left standing, save the shell of the school and a hospital. Only foundations bear witness to more than a hundred houses that once stood here. Residents say fewer than 100 of the town's original 500 survived, though nobody yet knows for sure.

Kazuo Takahashi, 60, is still looking for the bodies of his wife, mother and two grandchildren.

“In 300 years no tsunamis have hit this area, so most people didn't try and escape when the warnings came. They thought they were safe,” he said.

The Fukudas also lost two children: the body of their daughter, Risa, 12, who was due to graduate the sixth grade last week, has been found, while their son, 9-year-old Masaki, is still missing.

“I walked here to the school after the tsunami, in knee-deep water. There were rumors that some of the children had been helicoptered out, but it wasn't true,” said their mother, Miyuki Fukuda, 43.

“They were such good kids, they got good grades and they listened to what we told them. Risa was learning the piano and had just started learning English,” she said. “She was only 12 but she was taller than me, and really mature, like an adult.”

“My son had such a beautiful face, he really did. He was a fast runner and enjoyed being in school plays, and he was good in them. People used to compliment me about it, but being Japanese, I would say 'oh no, not really.' I couldn't say it when he was alive, but I can now,” she said with a broad smile, her eyes filling with tears. “He was good in them, he was really, really good."