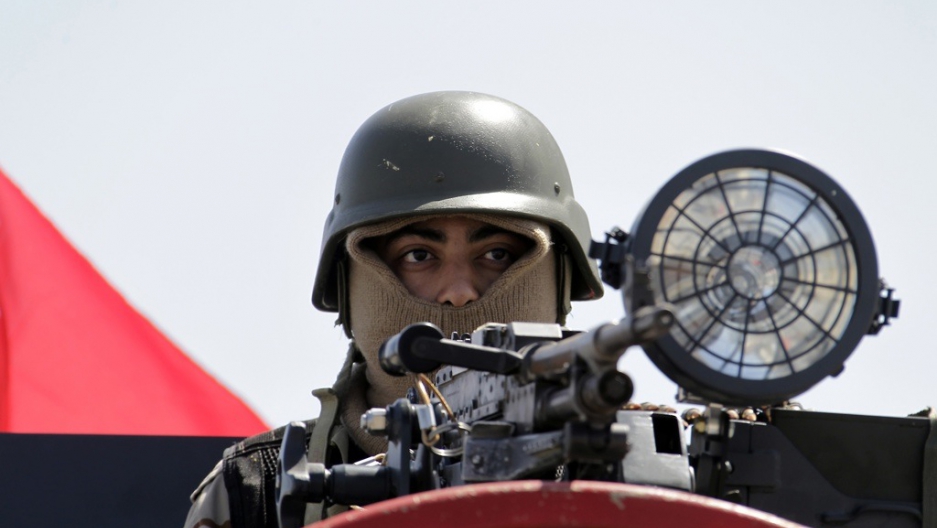 MANAMA, Bahrain — Ten days after the government of this tiny island nation brutally cracked down on protesters calling for political reform, Bahrain is a tense, unhappy country mired in a dangerous stalemate between its Sunni royal family and its Shiite majority population.

Backed up at times by fighter planes and helicopters, Bahraini riot police and military were in full display Friday to enforce the ban on demonstrations, erecting checkpoints on access roads to most Shiite areas. As a result, this capital city remained on edge with few cars on the road.

Nevertheless, small, scattered protests broke out in Shia villages outside this capital city, leading to at least one death when a 71-year-old man was overcome by tear gas fumes, according to the Shiite opposition party, Wefaq.

The protests, inspired by similar pro-reform movements in Tunisia and Egypt, began in mid-February and soon found a home in Manama’s downtown roundabout graced by the so-called Pearl Monument that celebrated Bahrain’s history as a pearling center.

The protesters were mostly Shiites because Shiites make up 60 to 70 percent of the island’s population. But they insisted that they were making democratic, not sectarian, demands.

The Sunni government of King Hamad Bin Isa Al Khalifa, however, increasingly saw the movement in sectarian terms and as a threat to its near total domination of the political system here. It also has accused Iran and its ally in Lebanon, Hezbollah, of fomenting opposition to its rule.

After asking neighboring Saudi Arabia to send in about 1,000 soldiers to protect vital installations, King Hamad declared a three-month period of martial law. And on March 16, his security forces used massive force to rout the protesters from Pearl Roundabout.

Since then, the number of deaths, which stood at seven at the time of the crackdown, has risen to 24, according to the opposition newspaper, Al Wasat. Two of the dead are from the security forces.

In addition, the government has made clear that it won’t tolerate any type of dissent.

It has not disclosed the number of political detainees it is holding. But they include several Shiite opposition figures, and at least one Sunni, secular-oriented politician, Ibrahim Sharif, head of the liberal Waad Party.

He was detained, said Munira Fakhro, a leading figure in the Waad Party, “because they don’t want a Sunni voice aligned with the Shia voices because this [dispute with the government] has to be sectarian.”

On Thursday, Wefaq said it had collected the names of 112 people who have gone missing since March 16.

There have also been violent attacks on government critics in recent days. Fakhro’s home was hit by molotov cocktails twice, the last time Thursday night. No one was injured, but the night attacks by unknown persons blackened the walls of her white-washed home and broke windows.

In an interview at her home, Fakhro said she did not know who perpetrated the attacks; no one has been arrested.

The use of such intimidation tactics is something new in Bahrain, she added.

“We all are shocked,” Fakhro said.

Unless the government agrees to “sit on the dialogue table” with the opposition, she said she feared that the current tense stalemate “might last for a long time.”

Mansour Al Jamri, editor of the opposition Al Wasat newspaper, said in an interview that both sides must compromise and that the approach now being used by the government won’t work.

“I don’t think the security campaign will resolve any crisis in Bahrain,” he said. “It requires a political decision and the sooner the better. If it does not come soon, it will have a wider impact in the region.”

In another move apparently aimed at punishing dissidents, the Education Ministry confirmed today that it is withdrawing scholarships from 40 students pursuing their education abroad because they allegedly "called for the downfall of the ruling system.”

As a result, the ministry “has decided to deprive them from a privilege they do not deserve, as any government will do in similar cases,” a ministry official said.

Aware of the tough stance being shown toward protesters, seven major opposition parties said Thursday that they did not endorse online calls for protests Friday and urged people not to participate, according to Wefaq party activist Sayed Hadi Al Mosawi.

“We know these protests will add some more blood and always we concentrate on [being a] peaceful movement,” he said.

“I reaffirm that we started peacefully, and we will remain peaceful, despite all provocations and sufferings,” he said in his sermon at Al-Sadiq Grand Mosque in Diraz.

According to one worshipper, the congregation was smaller and more subdued than previous weeks.

“We must be patient,” the sheik said. “We do not call for divisions and we will not respond to those who are attempting to categorize us in a certain way.”

But at the same time, he said, “the language of brutal force and abusive language being deployed against us will never destroy our will and desire to achieve our rights and dignity.”

Meanwhile, hotels on the island are almost empty and the nation that promotes itself with the slogan “Business-Friendly Bahrain” is losing its luster for corporations.

The Daily Tribune, an English language paper here, ran an article today about the dent in business for local establishments caused by the unrest.

“We used to have 160 to 170 customers during the weekends, but last week their numbers were around 40,” Rabih al Halabi, a manager at Zahle Restaurant, told the paper. “Now we have just one male singer and a belly dancer and we hope the situation will get better this weekend.”