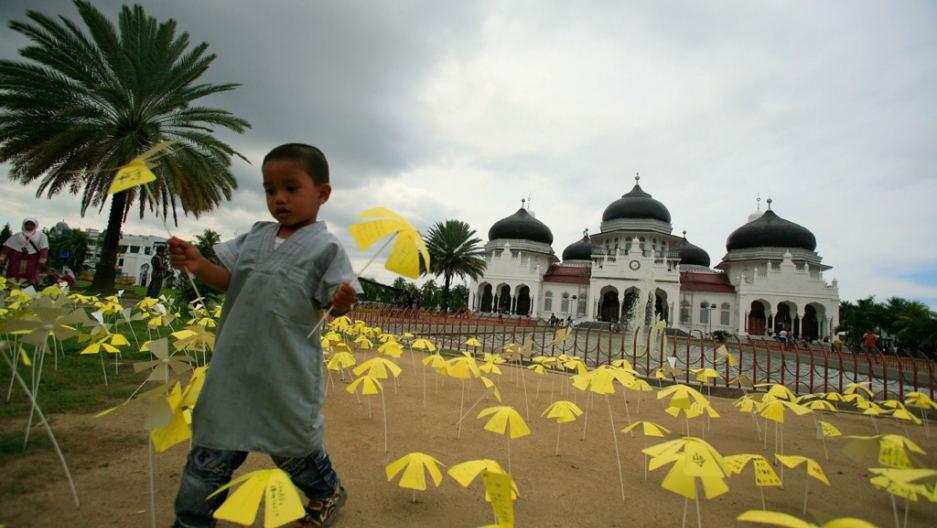 An Acehnese boy holds paper flowers provided by Japanese people from Kobe as part of the sixth earthquake and tsunami anniversary in Banda Aceh on December 25, 2010.
Credit: Chaideer Mahyudin
Share

JAKARTA, Indonesia — Years after the 2004 Indian Ocean tsunami devastated the Indonesian province of Aceh, Arsalan, a tall, stout man with a face locked in an expression of sadness, still carried a tattered picture of his young daughter Rini in his shirt pocket.

For months after the disaster the father of two had added his daughter’s pictures to the tapestry of missing person ads printed in newspapers and pasted on the walls of shelters.

In 2008 Arsalan had renewed his search for Rini based on the picture he was convinced had been taken in a refugee camp after the disaster. The photograph gave him hope, but also reopened wounds.

The emotional impact wrought by disaster lingers long after a town’s reconstruction, and as Japan assesses the damage from the recent 9.0-magnitude earthquake and subsequent tsunami, aid workers and sociologists say Aceh may offer important lessons about psychological recovery.

Like Aceh, entire towns along Japan’s coast have been flattened, families ripped apart and people left with nothing but uncertainty. There are also vast differences – foremost in the death toll, 20,000 dead or missing in Japan versus 170,000 in Aceh.

Before the tsunami nearly one-third of the people in Aceh lived in poverty. The remote province’s population was young. Kesennuma, a northern Japanese seaport wiped out by the wave, is aging.

“The notion of gaman, to endure or tolerate, is a core value for the Japanese,” reported the Christian Science Monitor.

But while culture is an obvious difference between a Japanese victim and an Indonesian one, responding to a disaster with order and kindness may be more a factor of disaster preparedness, say aid workers who facilitated the relief effort in Aceh.

After the 2004 tsunami, the international community pledged $7.8 billion to help with reconstruction and development, according to the World Bank. An additional $2.3 billion came from the Indonesian government for a five-year rehabilitation program.

The outpouring built roads, schools and more than 100,000 homes, stirring an economic boom that saw missing person notices replaced by deals for new cars and building materials. By 2008, most aid agencies had packed up and left, taking the jobs they brought and sparking fears of an economic vacuum.

Still, recovering from the trauma of such a wide-scale disaster involves more than how much damage was done and the amount of aid received, said Daniel Aldrich, a professor at Purdue University specializing in post-disaster recovery.

In Aceh, a 30-year armed conflict prior to the tsunami added to the difficulty of building community bonds, and emotional trauma heightened tensions. Japan has also struggled to preserve lines of communication among victims with a reputation for stoicism.

Eliminating the communication methods people use to talk through their recovery, led to scores of lonely deaths, or kodokushi, said Aldrich, referring to the damage done to the social fabric in Kobe, Japan, after a massive earthquake in 1995.

“A number of elderly victims were rushed out of their damaged homes into open apartments,” he explained. “But [when] you cut them off from friends, family and the neighborhoods they’ve known for years, all the things they know to be normal, all the things they rely on for emotional support and psychological assistance are gone.”

Post-traumatic stress and depression are common after major disasters, particularly among those who saw the destruction happen or never found missing family members, Elizabeth Frankenberg, a sociologist at Duke University, wrote by email.

A study she led titled “Mental Health in Sumatra after the Tsunami,” determined that restoring aspects of daily life was an important component of recovery. Many psychosocial trauma programs in Aceh worked to do just that by organizing religious activities, sewing groups and working quickly to get children back to school.

“It was important to motivate people to return to their regular activities because they help them restructure their minds from the emotional turbulence,” said Rika Setiawati, the coordinator of a two-year psychosocial program run through the Ibu Foundation, a nonprofit that assists women and children in emergency situations.

Setiawati worked with more than 500 people over six months to address symptoms ranging from emotional disturbance, such as persistent anger and depression, to sleep disorders, reduced appetites and compulsive behaviour.

“You would see people praying all the time for comfort, but a lot of it was guilt and the thought that they were being punished for doing something wrong,” she said.

Recovery times vary, and issues such as reoccurrence never fully disappear. Even now, more than six years after the tsunami, survivors shed tears as they watched television footage of the murky wall of water sweep over Japanese villages.

“It was exactly the same, except they have this horrible footage,” Achenese native Maisara Mucharam, who lost her husband and three daughters in the tsunami, told the Associated Press.

Nor is it uncommon for threats of a reoccurring disaster to spark alarm in stricken communities. Just watching a glass of water shake can bring back images of the tsunami, said Setiawati, who maintains contact with many of the victims she counselled despite leaving Aceh in 2007.

Many of those who helped with the psychological recovery say people are relatively better prepared now. “They are more alert and take warnings much more seriously,” said Edward Carwardine, a spokesman for UNICEF, which helped children address the disaster by getting them to talk about or draw pictures of their memories and trained teachers how to build coping mechanisms into long-term educational programs.

But fears linger — a tsunami rumor raised panic on March 18 as people fled for higher ground. And according to a 2007 UNICEF-commissioned study assessing children’s mental health, one in five children still suffered from post-traumatic stress disorders two years after the tsunami — the same year many of the psychosocial programs ended.

“The recovery is a long process, especially in cases of severe mental disorders that need [to be addressed in] the context of the local community,” said Roberto Benes, UNICEF’s chief of child protection in Aceh from 2005 to 2008.

Initial worries that the aid-driven recovery had damaged the social fabric in Aceh by creating competition for jobs and assistance have not fully materialized.

“There is a sense that the region has rebuilt itself, and fairly better,” said Carwardine, referring to vast infrastructure improvements brought on by rebuilding. Already analysts are talking about the potential Japan’s tsunami offers for rethinking policies on immigration and energy. (Until recently the nuclear emergency had removed the focus from disaster recovery.)

Yet life in both places has fundamentally changed, and many people displaced by the disaster will never return. Arsalan eventually gave up searching for his daughters. He married again and fathered two more children. But his memories remain.