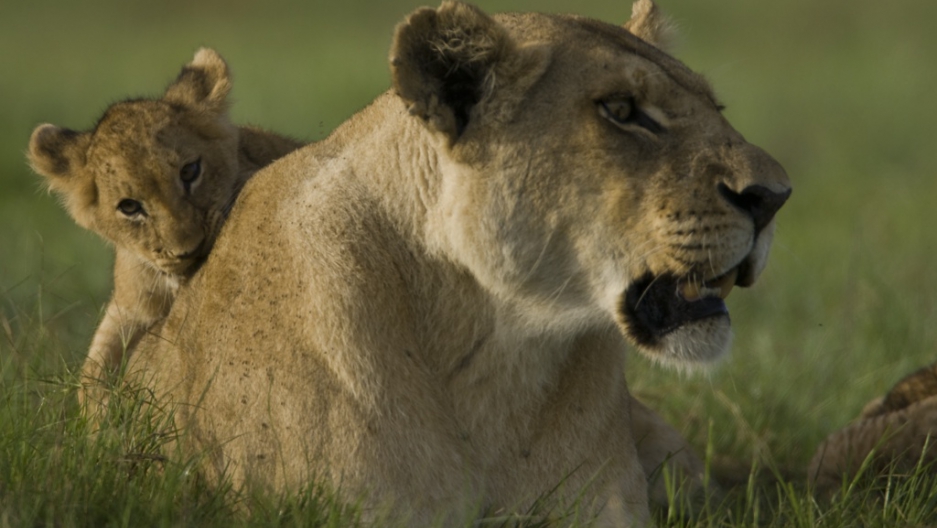 JOHANNESBURG, South Africa — Ma di Tau is a lioness who battles dangerous African buffalo, hungry crocodiles, a wildfire and marauding lions from a rival pride to save her cubs — all in all, a harrowing existence in Botswana’s Okavango Delta.

But while Ma di Tau and her brood face many natural threats, the biggest threat to African lions is humans. Some experts say lions could be extinct in the wild in as few as 10 years.

The story of Ma di Tau and Africa's dwindling lion population is told in "The Last Lions," a new National Geographic documentary. It has drawn substantial audiences in its recent release in the United States, sparking new attention to the lion crisis.

“This is the story of the handful of lions that we have left,” said Dereck Joubert, who along with wife Beverly spent more than two years in the bush filming the lions. “Many people leaving the theater are saying they had no idea.”

Africa’s wild lion population has dropped from 450,000 to as few as 20,000 in the last 50 years, mainly due to habitat destruction, trade in lion parts, trophy hunting, diseases often caught from livestock, and “retaliatory killings” from human-lion conflict. The concern is that a population collapse may occur as the number of lions falls dramatically and genetic diversity is affected.

A new effort is focused on eliminating what wildlife advocates say is one of the big threats to African lions — trophy hunting, mainly by American hunters. A coalition of wildlife groups has filed a petition with the U.S. Department of the Interior to have lions listed as an endangered species. This would mean that the import of lion trophies into the United States would be generally prohibited.

“We know trophy hunting is contributing to the decline,” said Jeff Flocken, Washington, D.C. office director for the International Fund for Animal Welfare (IFAW), one of the groups behind the petition. “I think people are shocked by how quick the decline has been.”

“If Americans know that they can’t take their trophies home, they’re not going to want to shoot the lions because it costs them a lot of money,” said Steve Smit, spokesman for Animal Rights Africa.

Tourists pay upwards of $22,000 to shoot a male lion, plus safari costs and the expense of shipping home the trophy.

It is usually the dominant males that are killed by trophy hunters and this has a huge impact on other lions, sparking battles for dominance in the pride. The new male in charge will often kill the offspring of his former rival, said Dereck and Beverly Joubert, filmmakers who are also explorers-in-residence for National Geographic.

“I think most hunters don’t know that when they shoot one male lion they are signing a warrant for death of 20-30 lions in a pride,” said Beverly Joubert. “For one male lion, many others are killed.”

But the petition has been challenged by Safari Club International, an international hunters’ group, which said that listing lions as endangered would “effectively end hunting” and its economic benefits to African communities, leading to more human-lion conflict by devaluing the animals.

“Hunters and hunting actually benefit Africa's lions — as well as its humans. Revenues from hunting generate $200 million annually in remote rural areas of Africa. This revenue gives wildlife value and humans protect the revenue by protecting the wildlife,” said a statement by Larry Rudolph, the group's president, and Joe Hosmer, president of its charitable foundation.

The 4,000-5,000 lions in captivity in South Africa are separate from the endangered wild lion population, according to the South African Predator Breeders Association, which represents breeders of lions used in what is called “canned hunting.”

But if lions are declared endangered in the United States, this would also affect captive-bred lion breeders in South Africa, an industry that is said to employ 5,000 people. “It would have a huge effect on our industry,” said Carel van Heerden, the association’s chairman.

In December, van Heerden’s association won a court ruling to allow the hunting of captive-bred lions released into the wild a short time before they are killed, ending a law that had required that lions must roam free for two years after their release.

However, Dereck Joubert said that the economic impact of lions becoming extinct in Africa would be much greater than that of ending lion hunting, because it would affect the tourism — a huge industry in many African countries.

And while he agreed that captive-bred lions are separate from the wild population, he said there are ethical and spiritual reasons to oppose “canned hunting.”
“This is just a slaughtering industry,” said Joubert. “You might as well go to an abattoir and shoot a cow — it’s that easy.”

The Jouberts also argue that canned lion hunting contributes to the trade of lion parts, used as "muti" in traditional southern African medicine as well as in Chinese medical practices.

Animal Rights Africa said that it is concerned about the hunting of free-ranging wild lions that cross from national parks into private reserves where they can then be shot.

“We would be elated if that legislation would be passed,” said Smit, the group’s spokesman. “The American hunting industry has a big role to play in what happens in South Africa. It would mean that a lot of people that are relying on the American dollar would be less inclined to stock up on the numbers of lions that they do.”

All profits from the film "The Last Lions" are going to National Geographic’s Big Cats Initiative, which supports conservation projects in Africa.

“The life of lions is already hard enough in the wild,” said Beverly Joubert.

“This is a time for everybody to get behind a single effort, otherwise we will lose those lions,” said Dereck Joubert. “We’ve got five years to do this and we need everybody’s help.”