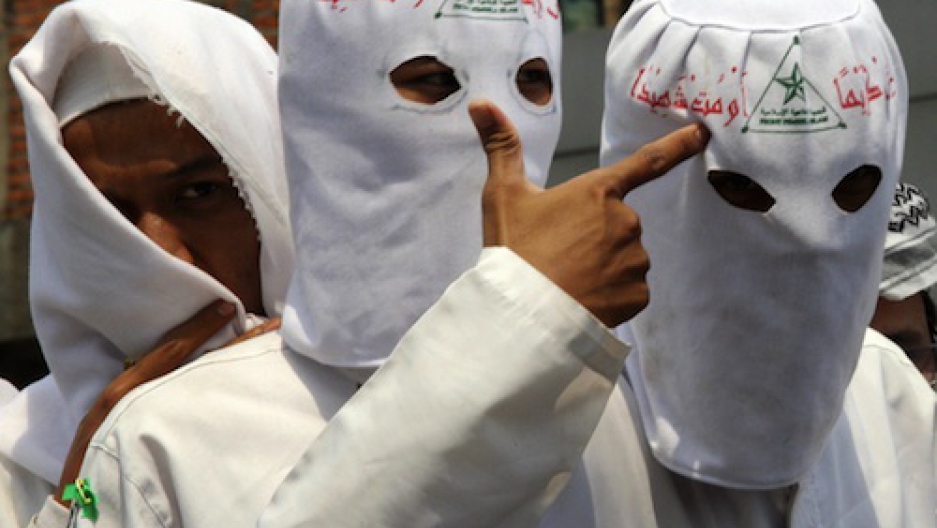 You might suspect the plotters' call to arms would focus on Indonesia's corruption or entrenched poverty, as did protests in the Middle East.

Not exactly. This anti-government push is enflamed by hatred of a Muslim sect you've probably never heard of: Ahmadiyya.

As I noted in a Rice Bowl post last month, the Ahmadiyya sect broke away from conventional Islam in the 1800s (as Mormons did from mainstream Christianity) and believe Muhammed was not the final prophet.

For that, they are despised by hardcore fundamentalists, such as the Islamic Defenders Front, a well-connected vigilante group Global Post profiled late last year.

This group's highly placed connections within the military/police hierarchy is no secret. Actually, their threats to overthrow the government are no secret. They've recently vowed to do just that if Indonesia's president doesn't outlaw this Islamic sect and force them to convert to traditional Islam. The news here, according to Al-Jazeera, is that they're in league with powerful retired generals to make that threat a reality.

So far, they've tried to weaken the rule of President Susilo Bambang Yudhoyono by whipping up hatred towards Ahmadiyya and blaming him for refusing to eliminate them. It's fair to wonder whether this group and their powerful backers are just enraged by this sect -- who have existed in Indonesia for many decades -- or hope to use hatred of this group as a springboard to power.

All of this is extremely disconcerting.

No, this power play isn't likely to succeed, according to Al Jazeera's report. In reporting on the group last year, I was told repeatedly by scholars that their vision of a restrictive, Arabic-style Islamic nation is not at all shared by the wider public.

But as I've written before, their rising profile -- and the attacks on moderate Muslims, Christians and even Friday night partiers -- are steadily eroding Indonesia's reputation for tolerant Islam.

UPDATE: Hours after writing this, I see the Jakarta Post reporting that the Islamic Defenders Front's music "expert" is fretting over young Indonesians absorbing counter-culture/Zionist messages through rock music.

John Lennon's "Imagine" is part of this conspiracy, he says. So is the heavy metal music of Metallica, Lamb of God and Brazilian death metal group Sepultura.

I'm just impressed that the Islamic Defender front a) has a music expert and b) can decipher Sepultura's lyrics. I bought their "Chaos A.D." cassette in eighth grade and didn't understand a single word.