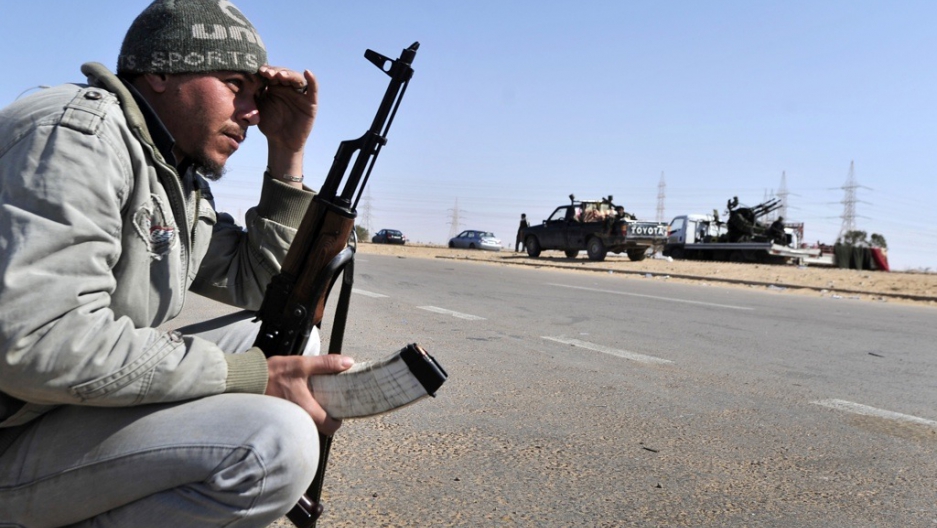 A Libyan rebel crouches at the last check point before the key city of Ajdabiya on March 23, 2011. Government forces have encircled the town.
Credit: Aris Messinis
Share

BENGHAZI, Libya — While a ragtag force of Libyan rebels has managed to gain some ground in the embattled cities of Misurata and Ajdabiya, their lack of formal training and clear leadership structure has so far prevented any significant success in fighting back the army controlled by Libyan leader Muammar Gaddafi.

Allies, after five days of air strikes, came to an agreement Thursday to shift responsibility for the military campaign to NATO forces after easing concerns from Turkey that the group was exceeding its authority. NATO is expected to now begin targeting Gaddafi's ground forces, tanks and artillery to help the rebel forces push back against Gaddafi.

French warplanes shot down a Libyan jet on Thursday in the first incident of its kind since enforcement of the U.N. no-fly zone began on March 17.

So far, though, the air strikes and the opposition's haphazard operation have failed to stop Gaddafi's forces from shelling rebel-held towns. Under the cover of night and into Thursday morning, Gaddafi's forces rolled into Misurata and began shelling the area around the main hospital.

Rebel leaders admit that a more organized force will have to be raised if they are to push all the way to Tripoli, Libya's capital, and unseat Gaddafi, who has ruthlessly held power for more than four decades.

Currently, the opposition relies almost wholly on a young, poorly trained band of rebels that races to and from the front lines in pickup trucks.

Their few victories are regularly pockmarked by amateurish, and often deadly, mistakes. On several occasions, young fighters have killed their own and injured others while firing into the air in celebration, overwhelming an already overwhelmed central hospital in Benghazi.

“This ‘intifada’ began on a peaceful basis. They were forced to arm themselves,” said Adelhafed Ghoga, a spokesman for what is now known as the National Transitional Council, of the young men now fighting in the field. “So to this end, they were forced to learn on their own how to fight and form fighting bodies.”

Former Libyan Army soldiers are now training some of the younger rebels, grouped under a unit called “Shebeb,” but they are not yet in operational control at the front, opposition leaders said.

The rebel leadership said they believed their motley crew of an army is becoming more organized, better coordinated and more serious with every battle it fights.

“The plan hopefully is the young men are gaining experience and with every city they gain momentum,” said media coordinator Mustafa Gheriani, a Libyan who lived for more than a decade in the United States. “To manage these revolutionaries is no easy task. You’re trying to manage people willing to die. It takes six months to train a soldier.”

Most of the rebels have only each other to learn from. Mohamed Elgarguri, a Californian with Libyan roots, sold his Nissan 350i to take part in the revolution.

“Experience teaches more than a class,” he said.

Elgarguri, who helps coordinate nighttime patrols on the outskirts of Benghazi, said he has learned how to use a Soviet-model AK-47 and rocket-propelled grenades since joining the fight.

“I’ve never fired rockets in my life. Now I’m learning from these guys,” he said enthusiastically.

Rebel leaders said it takes time to form a functioning army, while at the same time admitting that time is not something they have on their side.

“It started from a vacuum,” said Iman Buigaighis, a former professor of dentistry who is now acting as a rebel spokesman. “We are not ashamed to say we are learning.”

The opposition’s leadership itself, by all accounts, is also learning on the fly. Strategies appear to change from hour to hour.

Ghoga dismissed rumors on Wednesday that the transitional council’s leader, Mamoud Jebril, had returned to Libya to form a permanent revolutionary government.

“Today, there’s been a misconception,” Ghoga said. “Jebril is just completing a working team of subcommittees for oil, financial and other civil portfolios to run the country on a temporary basis.”

Representatives of the council said they had decided to delay formalizing its structure in any way that might contribute to the break up of the country. Rebel leaders said they suspect that Gaddafi is trying to turn what began as a protest movement into a civil war, where the opposition would control the eastern part of the country and Gaddafi the western part.

“We want to be in Tripoli when we name a government,” Abdul Karim Bazama, the transitional council’s secretary, said today. “We aren’t planning a partition of East from West. Tripoli is still the capital.”

Meanwhile, the situation on the ground in the embattled city of Misurata and other nearby towns is getting so bad that some civilians — in a major shift in public opinion — are now calling on the international community to provide ground forces in addition to the no-fly zone it has already begun to enforce.

“People in the streets are even starting to say they approve a full military invasion of foreign troops because they are suffering,” Bazama said.

Ghoga confirmed that 28 people had died in fighting between rebel fighters and Gaddafi forces in the last 24 hours. Sixteen civilians, he said, were killed in Misurata on Wednesday. Misurata has been under continuous shelling and sniper fire for days, cutting off essential supplies like food, water and fuel from the civilian population.

The successful downing of a Libyan plane reportedly happened near the Misurata. A U.S. official quoted by The Associated Press said a French Rafale fighter shot down a Libyan G-2/Galeb, a training aircraft with a single engine.