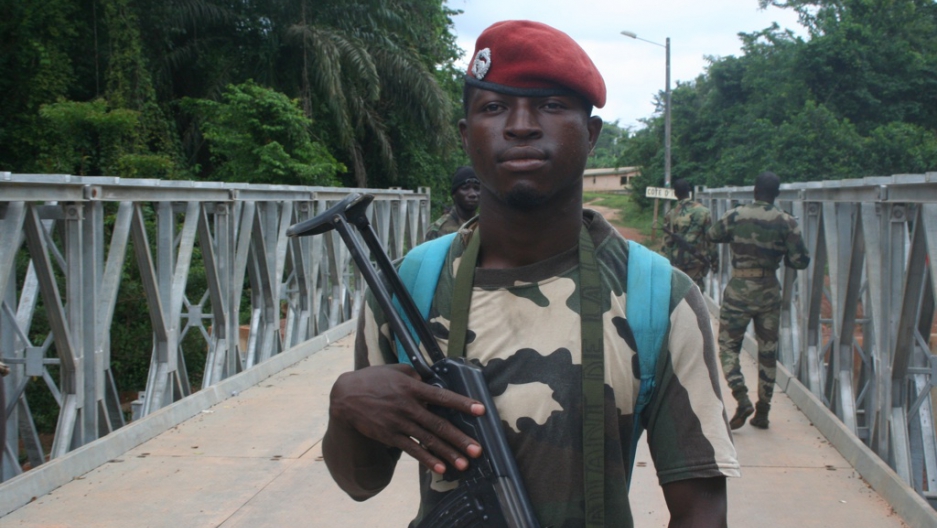 TOETOWN, Liberia — As gun battles between Ivory Coast's rival armed forces intensify, throngs of refugees are fleeing the fighting for the relative safety of neighboring Liberia.

About 90,000 Ivorians have crossed into eastern Liberia, according to U.N. refugee experts, who expect that number to swell to 500,000 if Ivory Coast slides back into civil war.

Members of Ivory Coast's Forces Nouvelles, who are loyal to presidential contender Alassane Ouattara, have closed a bridge here that connects the country to Liberia, forcing the masses of Ivorian refugees fleeing their country to wade the river or climb through the bush.

“Why should there be refugees? We are protecting the people. We are fighting for freedom in Ivory Coast,” says Commander Angelou, a slight man in a red beret and army fatigues, who along with 10 other rebels is armed with an AK-47. “The trouble is not between civilians and the army, no, it’s between army and army.”

Angelou and his men crossed into Toetown last week to deliver a message — whoever crossed the border from Liberia back in Ivory Coast territory now held by the rebels would be executed. The rebels took the town of Toulepleu — 7 miles into Ivory Coast — last week and are taking smaller towns along the border as they move south.

So far none of the Ivory Coast refugees have tested his bluff.

The conflict over Ivory Coast's disputed elections is threatening to reignite civil war, sending a massive influx of refugees into Liberia. Fighting has broken out across Ivory Coast between the army loyal to the defiant incumbent, Laurent Gbagbo, and the Forces Nouvelles, the former rebels who support the internationally recognized election winner, Alassane Outarra, a former International Monetary Fund official.

The political standoff began when the U.N., the African Union and Ivory Coast’s electoral commission recognized Outtara as the winner of the Nov. 28 presidential election. Gbagbo has refused to cede power, using the military to blockade Outarra and his cabinet in a hotel in Ivory Coast's largest city, Abidjan.

More than 400 people have died in post-election unrest. Another 500,000 people have fled their homes and are displaced inside Ivory Coast, according to U.N. figures.

Many fear the violence will destabilize Liberia, which is still recovering from its long-running civil war that ended in 2003. Already Liberian border villages are struggling to accommodate the newcomers. The capture of Toulepleu caused another 2,000 Ivorians to cross over into Liberia overnight last week.

In response to the presence of the armed Ivorian Force Nouvelles nearby, the Liberian president’s office sent 20 members of the emergency response unit, the only armed police unit in Liberia since a massive postwar disarmament campaign, to the border in Toetown. Some say Liberian security forces are severely outgunned.

“We know that in case of any cross border activity, our security alone will not be able to sustain the violence,” said Kamara Mohamed Marandos, head the International Organization for Migration in Liberia.

Ivory Coast warlords have recruited Liberians to cross into Ivory Coast to fight, according to Innovations for Poverty Action, a Monrovia-based nonprofit that works with Liberian ex-combatants. Observers say fighters are also coming from Liberia's Movement for Democracy, a group of 2,000 militiamen active in Liberia’s civil war that has operated from Ivorian territory for years.

Three days of gunfire sent Dennis Kula, 44, and his family on a two-day trek through the bush and across the Cavalla River into Liberia. Kula’s 7-year-old son, Nyoneo, was lost along the way, but Kula said he would not go back until the fighting has ended.

Samuel Doh, 19, from the small Ivorian town of Gueya near Toulepleu, tried to outrun the fighting but was shot in the foot. He said he doesn’t know if the shooter was with the Ivorian army or the Forces Nouvelles.

In West Africa, peace is fragile. Liberia, Guinea, Ivory Coast and Sierra Leone have all suffered civil wars within the last decade, and in every case, the fighting extended beyond borders. Liberia’s warlord-turned-president, Charles Taylor, is on trial in The Hague for trading guns for diamonds in Sierra Leone’s civil war. Taylor used Ivory Coast as the base to launch his military campaign into Liberia in 1991.

Liberian President Ellen Johnson Sirleaf is trying to prevent Liberians from contributing to the looming conflict in Ivory Coast. She summoned border politicians and former Liberian rebel leaders to a meeting in Monrovia three weeks ago. She gave them $10,000 to go door to door and discourage young men from crossing, according to Mtasi, the U.N. field officer.

The "zoes," Liberian medicine men, have also joined the campaign to keep Liberians from entering the fray. Chris Bailey, the Grand Gedeh Country superintendent, said the healers tell people that "Whatever protection we gave you in the past, we want to inform you once you cross the border, that medicine will fail automatically.”

Emily Schmall is a multimedia journalist now based in Monrovia, Liberia, where she serves as Country Director for New Narratives, a journalism mentorship project for young women. Mae Azango is a New Narratives fellow and a regular contributor to FrontPage Africa, Liberia’s most widely circulated newspaper.