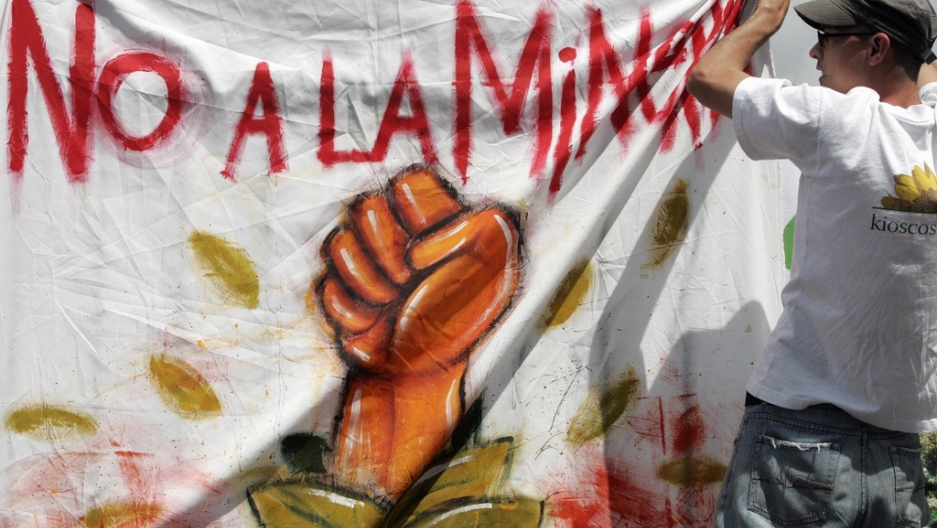 A man hangs a banner reading "No to the Mining Industry" during a protest in San Jose on Oct. 27, 2008.
Credit: Mayela Lopez
Share

SAN JOSE, Costa Rica — It started with a dispute over one gold mine. It led to an all-out ban on open-pit metal mining, making Costa Rica the region's most anti-mining country.

The Central American country has shunned the mining industry even as precious metals fetch record prices, spoiling companies’ hopes of seeking fortunes beneath the earth of this forest-coated country.

Biologists argue that gold mining poses a threat to Costa Rica’s prized biodiversity. Mining advocates, however, say the activity has evolved to be eco-friendly. Promoting it, they say, would spur foreign investment and job creation.

That argument cuts to the core of the debate in this country that prides itself as a great friend of the environment: Should conservationism prevail even at the expense of opportunity for development and prosperity?

In the case of open-pit mining for gold, Costa Rica has chosen to stay green.

Much of the attention has focused on the Las Crucitas mine, which sparked an anti-mining movement that became a cause celebre for Costa Ricans.

The mine is owned by a local subsidiary of Canadian company Infinito Gold Ltd. Its proximity to Nicaragua, about 3 miles from Nicaragua’s San Juan River, was considered a pending powder keg between two uneasy neighbors if any environmental damage were to occur.

According to Infinito Gold, Crucitas has at least 1.2 million ounces of gold and possibly much more, but environmentalists say the site is home to precious wildlife such as endangered macaws.

Industrias Infinito S.A., the Costa Rican subsidiary, is willing to do all it can to “diminish our ecological footprint,” said company spokesman Juan Carlos Obando.

Since mineral exploration began there in 1995, progress has been halting, as opponents repeatedly challenged the project in the courts.

In October, protesters held a hunger strike to press President Laura Chinchilla to prohibit mining at the site. But she said it was a matter for the courts.

Yaneth Rojas, a 51-year-old campesina, camped out in front of the Casa Presidencial and fasted for seven days. Some of the protesters lasted three-and-a-half weeks without food.

“We’ve gone into this struggle against mining ‘head, feet and hands,’ as we Costa Ricans say,” said Rojas, a member of the Northern Front anti-mining group.

By last May, 86 percent of Costa Ricans were against the Crucitas mine and 77 percent opposed open-pit mining in general, according to a poll by National University’s Idespo research institute.

Then last November a San Jose court ruled to annul the Crucitas contract.

“This marks a watershed in Costa Rica,” Alvaro Sagot, one of the environmental lawyers who brought the case, said outside the courtroom. “Environmental feasibility can no longer be granted with such flippancy.”

And just one week earlier, congress had voted to prohibit open-pit metal mining, which took effect last month. The law is not retroactive and would not apply to Crucitas, but the message to prospective mining companies was clear.

Speaking to reporters, Chinchilla acknowledged it’s not an easy position to take, as the country could use the tax revenue to tackle its mounting budget deficit.

“But Costa Rica said it does not want that,” Chinchilla said. “Costa Rica is headed toward a model of economic development sustained by highly qualified human resources and productive activity that coexists with the environment, and distances itself from the whole extractive industry.”

The new mining code comes down hard on the formal mining industry but critics warn that the law is too soft on small-scale “artisanal” miners. The legislation gives these informal miners, known for using toxic mercury to extract gold, up to eight years to transition away from their old trade.

The hundreds of informal miners using mercury won’t be weaned off their lucrative trade easily, said Enid Gamboa, head of the national geologists association. The chemicals they use could cause “disastrous contamination of the Golf of Nicoya” near where many of them work, Gamboa said.

Metallic mining makes up less than 1 percent of Costa Rica’s GDP but geologists reckon some of the nation’s roads and nature reserves could rest on vast quantities of unexplored gold and other minerals. It would take private exploration — mining companies — to find this out for sure.

Fernando Nietzen, a mining expert with Gamboa’s association, wishes his country would change its mind.

“A mine is what some might call an environmental disaster. Not us,” Nietzen said. “It’s a well-developed work of engineering, and it’s a beauty to see.”