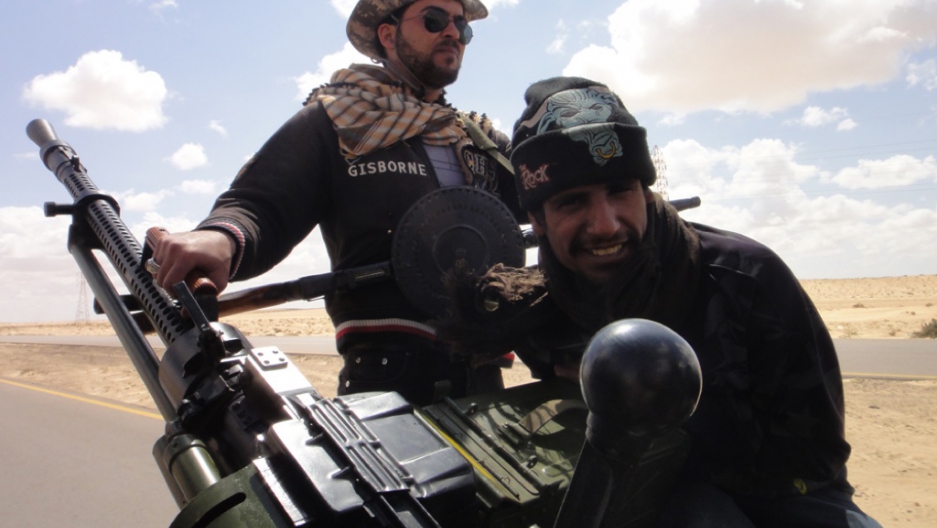 BENGHAZI, Libya — Three days and nights of air strikes by allied forces have effectively created a no-fly zone across the northern part of the country, but do not appear to have given the rebels the edge needed to push back forces on the ground that are loyal to Libyan leader Muammar Gaddafi.

The opposition has so far failed to drive back Gaddafi’s heavy armor, tanks and weapons encircling the strategic oil town of Ajdabiya, which lies about 100 miles south of the rebel-held stronghold of Benghazi.

On Tuesday, Gaddafi tanks and rockets repeatedly bombarded rebel positions just outside of Benghazi, a show of the leader’s fortitude as his forces continue to push toward this last-remaining base of opposition.

The U.S. military, meanwhile, confirmed that one of its fighter jets crashed inside Libya after suffering mechanical failure. A military spokesman told the BBC that there was no indication of hostile fire. Both the crewmen ejected safely from the aircraft.

At one point during the fighting on Tuesday rebel soldiers sustained a direct hit to one of their makeshift ambulances. At least one man was dragged back in the bed of a pickup bleeding from the head. Two other civilians, who were shaken, were also picked up and returned to Benghazi to shouts of “Allah Akbar!”

The opposition has been unable to organize a push to advance directly toward the tank positions in Ajdabiya, which they say Gaddafi has strategically placed near civilians to protect them from allied air strikes.

“The plan is perfect for us,” said Yasser Hassel, 32, a rebel and former military soldier. “There are no air strikes today. We’re waiting for the French to strike accurately.”

But there is uncertainty in the field whether or not allied planes will strike Gaddafi’s forces if they are not on the move and not actively targeting civilians. The question might be irrelevant if the loyalist positions are so close to civilians that there would be collateral damage on a battlefield already strewn with unexploded ordnance.

It is a debate raging among the allies themselves. The United States, Britain, France and others appear to be at a standstill, unsure of what their next move would be and even unsure about which country or multilateral organization should lead the mission going forward.

The United States has said that it regarded its mission — the establishment of the no-fly zone — near completion. But the no-fly zone might not be enough to help the now-scattered opposition to muster a counter-offensive.

The rebels claimed Tuesday that Gaddafi forces are still targeting civilians in Ajdabiya. But the reports from the town are sporadic at best, with word of emergencies that range from a lack of medical supplies to a full-blown civilian catastrophe in the town of more than 150,000 residents, occasionally reaching Benghazi.

The rebels, however, said that Gaddafi’s supply lines had been cut, and many opposition fighters said they will just wait until the leader’s tanks run out of shells. Some said there are ongoing negotiations for the loyalist forces to surrender to a civilian authority in the town.

“Air strikes have done much,” said Ibrahim Saleh, 42, a resident of Benghazi. “But we hope for more weapons and supplies. We don’t need foreign troops, we are ready to do the fighting for ourselves.”

NATO, meanwhile, broke a week-long deadlock Tuesday over whether to intervene in the Libyan conflict, agreeing to use planes and ships to enforce the United Nations arms embargo against Gaddafi’s regime, according to Bloomberg.

The trans-Atlantic alliance also said it was on standby to police the no-fly zone and would go into action in the skies over Libya “if needed.”

Earlier, the bombardment of Libya and possible killing of more civilians came under criticism by the Arab League, although the organization's secretary general, Amr Mussa, later gave his backing to the action.

Obama defended his approach during his tour of Latin America Monday, saying it was "very easy to square our military actions and our stated policies."

He also sent a letter to Congress arguing that he authorized strikes that will be limited in duration and scope and that will support America's national interest.

The United States is moving to hand command of the strikes to its allies in Europe, but there was confusion Monday over who will take control and from where, the New York Times reports.

Obama has stressed that Gaddafi must step down or be forced from power. This "policy" announcement came after the top U.S. commander, Adm. Mike Mullen, insisted on Sunday that the removal of the Libyan leader was not the goal of the current allied military operation.

Obama said that as part of the international coalition now enforcing a no-fly zone in Libya, he had "authorized the United States military to work with our international partners to fulfill that mandate," according to the Australian Broadcasting Commission.

"Now, I also have stated that it is U.S. policy that Gaddafi needs to go," he added, speaking in Santiago, Chile.