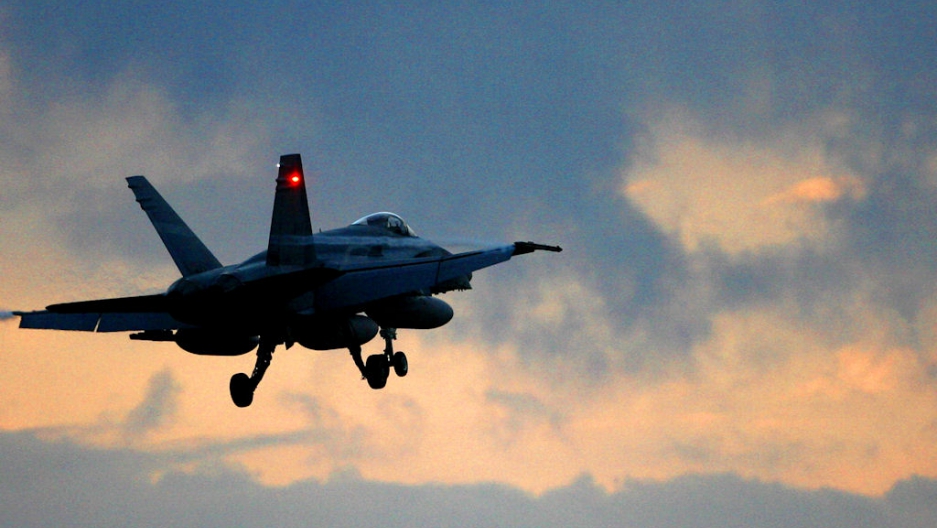 A Canadian F18 Hornet fighter flies from the air base in Trapani Birgi on the Italian island of Sicily on March 19, 2011.
Credit: Marcello Paternostro
Share

ROME, Italy ― Italy, the closest European country to Libya, has provided crucial support to the coalition striking against Muammar Gaddafi’s forces. It has eight jets at the ready, and has granted its allies the use of seven air bases.

But the crisis has revealed the weakness of Silvio Berlusconi, Italy’s embattled prime minister, whose political allies are balking at the military action.

“They will take away our oil and gas, and millions of immigrants will come to Italy,” said Umberto Bossi, leader of the anti-immigration Northern League party and a crucial ally in Berlusconi's government, before the military strikes began last weekend.

The rebellion in Berlusconi’s corner is growing: He already had to rely on opposition votes to pass a resolution on the Libyan intervention and might have to do so again in the coming days.

Italy's foreign minister, Franco Frattini, on Monday threatened to deny access to Italian bases should command of the operations not be given to NATO ― a move opposed by France, which is currently directing the strikes along with the British and Americans.

“Italy's position vis a vis the Libyan crisis is a difficult one,” said Alessandro Campi, a political analyst. “Berlusconi built a relationship with Gaddafi that was not just political, but personal.”

If Rome’s caution in supporting the strikes has bordered on “ambiguity,” he said, it’s because of Italy’s strong economic and geopolitical ties with Libya.

In 2008, for example, Italy signed a controversial “friendship treaty” with Libya. It stipulates that Italy will give Libya $5 billion over 20 years to invest in infrastructure and development in compensation for Italy’s colonial past. The treaty said that the projects would go to Italian contractors — for example, a motorway stretching along 1,050 miles of Libya's coast that has been assigned to Italy's Impregilo. If the Libyan government changes, said Nicola Borri, an economist with Luiss University, the contracts might go elsewhere.

But it's not just that, Borri said: “Libya gives Italy 25 percent of its oil and 10 percent of its gas, mostly through long-term contracts with Italian companies at below-market prices. Would they be renewed under a new leadership? And who would be called to develop Libya's resources?” New companies, such as France's Total, might step in to fill the void.

More controversial, however, are Libya's stakes in key Italian companies, such as Finmeccanica — a defense conglomerate — Fiat and Unicredit, Europe's third largest bank. “Those assets,” said Borri, “are now frozen, but will eventually have to be put for sale again. This is particularly worrisome for Unicredit: Libya's 7.6 percent stake might change the control and management of the bank, and no Italian investor, or group of investors, has enough money to buy it all.”

Italian politicians’ fears about France’s dominance of the Libyan campaign reflect economic fears for Italy should France dominate a subsequent peace. In the face of that discomfort, Berlusconi has not played his cards well, Campi said. “He left the initiative in other people's hands and now, should Gaddafi fall, France and the U.K. would be the ones to reap the most benefits. On the other hand, if he stays, Berlusconi will be accused of the typical Italian move: turning his back on an ally in times of need.” In both cases, Italy could lose its economic pre-eminence in Libya.

The economic hit on Italy because of the changes in Libya might be compounded by an influx of migrants on Italy's coasts. Lampedusa, a small Italian island in the Mediterranean just 70 miles from Libya, is swamped with migrants from Tunisia and Egypt. The migrants far outnumber local inhabitants as they wait for transfer to mainland Italy, where they will be processed by immigration authorities.

This plays well with the anti-immigration platform of the Northern League. Italy's interior minister, Roberto Maroni, a Bossi man, has been speaking of the risk of “millions” of Africans flooding Italy ever since the start of the uprisings in North Africa earlier this year. With Libya on the verge of collapse, his warnings hold more weight.

Immigration could become the main issue in key local elections next May. Berlusconi fears his own party will suffer at the hands of the Northern League, further increasing its clout in his government. “Bossi's party,” said Campi, “already sets the agenda in key policy areas such as the economy, security and immigration. It is the true axis of the government.”

A poll by Lapolis showed that eight out of 10 Italians favor a diplomatic, rather than military, solution to the Libyan crisis. Even though Berlusconi risks losing further popular support while he is already weakened by sex scandals and sluggish economic recovery, he has stuck with his NATO allies on Libya — for now.