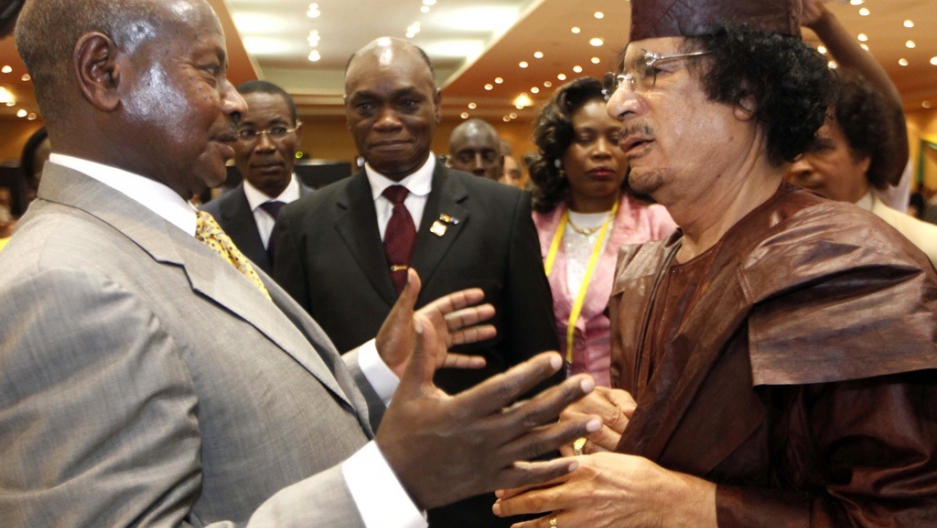 Ugandan President Yoweri Museveni, left, speaks with Libyan leader Muammar Gaddafi at the African Union Summit in Kampala, on July 27, 2010, where 30 heads of state from the AU's 53 members gathered for three days amid unprecedented security in the Ugandan capital.
Credit: Mahmud Turkia
Share

A number of Africa's leaders have criticized the bombings of forces loyal to besieged leader Col Muammar Gaddafi.

Gaddafi has long been shunned as an erratic troublemaker by fellow Arab leaders so he has courted alliances with African leaders and has used Libya's oil money to buy friends acrosss the African continent. Gaddafi and Libya's money were the major backers which transformed the Organization of African Unity into the African Union in 2002. Gaddafi has donated a substantial amount to the African Union's annual budget.

"Arabs and the Libyans did not understand the extent to which the West could interpret that resolution and give it a broader interpretation rather than a narrower one which would limit their supervision of the no fly zone to strictly the air and to then prevent Libya its aircraft," Mugabe said Monday, according to the Zimbabwean.

"The Arabs are strongly backed by France and Britain, which drafted elements of a no-fly resolution last week," said Mugabe, 87 and in power for 31 years. "And this was the thinking of the Arabs and the thinking of the Africans, but not the Westeners, in the same hypocritical way as before, interpreted it to mean permission under it to bombard any places of their own choice in Libya, including civilian places, even the home of Gaddafi!"

Mugabe, whose Zanu-PF party receives campaign funds from Gaddafi and farming implements for its campaign, said he did not think the Libyan leader was right in bombing his own people but said it was hoped that he could reform and install better government but not through foreign intervention and regime change.

"We don't agree with the form of government that was in Libya, but Libya was nevertheless a member of the African Union and we looked forward to it transforming its own system in its own way, not in the way they desire," Mugabe said, referring to the coalition forces that have pounded Gaddafi's air defences. Mugabe claimed the West has taken an active interest in Libya's internal affairs because of the oil. Mugabe accused the western powers of wanting to control Libya's oil resources.

"And now the West is talking about it ... tomorrow it will be the masters of the resources of Libya especially oil and it is this oil, oil, oil which is the undoing of the Libyan people," Mugabe said.

Uganda's Yoweri Museveni — a former darling of the West whose but who has been criticized for staying in power for 25 years and becoming increasingly authoritarian and corrupt — also accused the coalition of double standards.

"In Libya, they are very eager to impose a no-fly zone," he wrote in a letter run by the national press. "In Bahrain, and other areas where there are pro-Western regimes, they turn a blind eye to the very same conditions, or even worse conditions."

"Regarding the Libyan opposition, I would be embarrassed to be backed by Western war planes, because quislings of foreign interests have never helped Africa," said Museveni.

"As South Africa, we say no to the killing of civilians, no to the regime-change doctrine and no to the foreign occupation of Libya or any other sovereign state," he said. “We call for an immediate ceasefire in Libya and an end to attacks on civilians.”

Nigerian Foreign Minister Odein Ajumogobia criticized the international community for acting to impose a no-fly zone over Libya, but failing to protect civilians in Ivory Coast, where hundreds have died in violence prompted by a political standoff.

According to independent South Africa-based political analyst Daniel Silke, the emerging criticism from South Africa and Nigeria has been prompted by the harsh reality of Western bombs pounding an African nation, reports the German News Agency, DPA.

"African countries and other emerging nations were caught offside by the virtue of the very broad-ranging wording attached to the UN resolution," he said. "After the first bombs, the reality became quite different to the theoretical prospect of a no-fly zone."

The African Union, which Gaddafi headed in 2009, instituted a five-member panel including Museveni and Zuma to look into the Libyan situation. However, the African leaders were denied permission to get into Libya.

The panel, which met Saturday in Mauritania, said it opposed any military intervention in Libya.

The stance of the AU and individual African leaders puts them in line with emerging powers such as China and India, which both have expressed concern over the bombings.